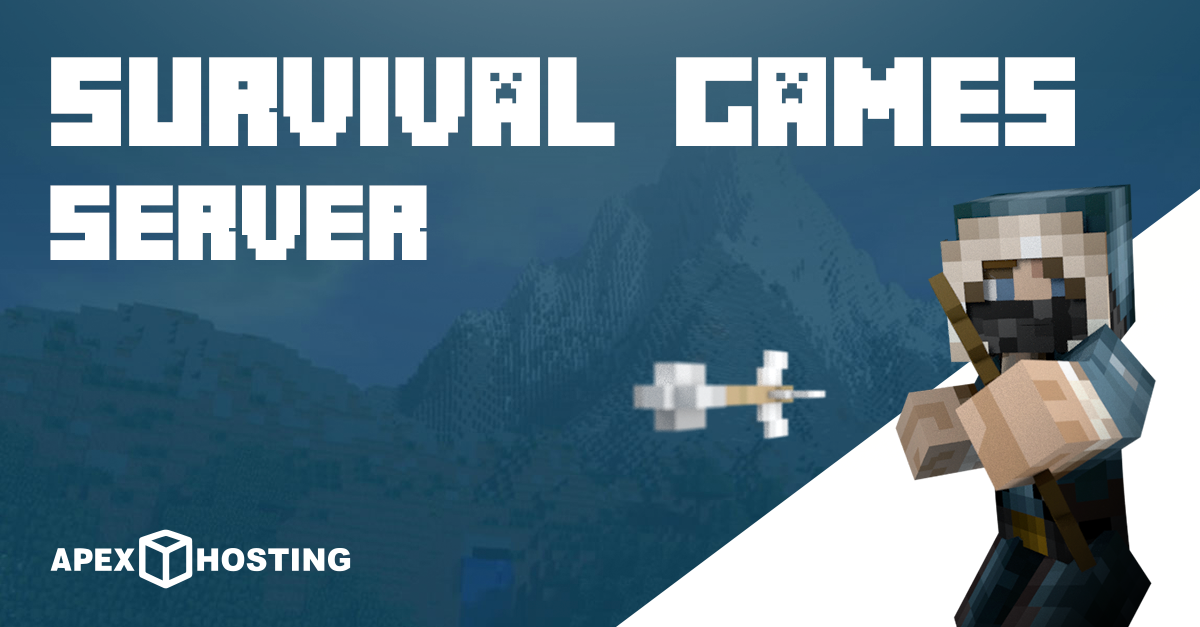 Survival Games has been a super popular game type ever since the original Hunger Games books and movies came out. Minecraft was the perfect platform to emulate these on and the “Survival Games” genre was born. Survival Games takes you and drops you into an arena with other “tributes” and after the match begins the last one standing wins. There is plenty of strategy to this game type, it can be played at a breakneck pace or it can be played slowly and patiently while waiting for other players to fight one another. You can have a rotation of as many arenas as you’d like (within reason) and you can create your own arenas as well as downloading previously made ones from other sites. In this server, we’ll provide you with 5 maps of the start with the option to install as many as you like of course. One thing to note with this game type is that the more maps you install the more RAM your server will require. If you have anything less than a 2GB server I would not recommend running the Survival Games pack unless you know you won’t have a lot of players online. For this game type, I’d recommend around 3-4GB especially if you want to add maps or have a fair amount of players online and in-game at once.

Upon installing the Survival Games game type on your server you’ll log in to our main lobby area which will show you some basic information about the plugins that the server will utilize and how they operate as well as showing a list of the current maps installed and a brief description of each. If you’d like to install more maps into the server there will also be a short tutorial here on how to do so. Once you’ve gotten a feel for the server and how it works you’re welcome to type /sg join which will present you with the base option for joining a game! After that, it’s all automated and should be good to go essentially right when you join! All the maps will start once 4 players have joined and after the game starts there will be a 5 second grace period during which you cannot injure other players. Once there are 3 players left lightning will start to strike near them to indicate where on the map they are. You can also enable the deathmatch feature if you want in the Survival Games plugin configuration file and this will transport the players to the center of the map. However, this is disabled by default. You’re ready to get in, play, and survive!

There is 3 Ranks setup on the server:
Tribute – By default, everyone will join as the Tribute rank. This will allow them to play the games but not edit them or have any extra perms.
Mod – Has the ability to ban, kick & mute players. Mods can not edit maps.
Admin – Has every permission.
The ranks can be edited using PEX

Admin Commands:
/sg createarena – Creates a new arena in your region selected with world edit
/sg setlobbyspawn – Set the spawn point for dead tributes
/sg addwall – Sets the signs you have selected with worldedit as a lobbywall.
/sg disable – Disable a game and force reset it (forces the arena rollback to run, useful if a crash or server shutdown occurs while a game is running. Also allows you to make changes the the arena.
/sg disable – Disabled every arena at once
/sg enable – renable a disabled game
/sg enable – enable all games
/sg start – Force Start the game your in
/sg start – Force a game to start is the arena # and the is how long the countdown is
/sg setspawn next – Set the next spawn point for the arena you are located in
/sg setspawn – set a specific spawn for the arena you are in (
/sg delarena – Deletes an arena
/sg resetspawns – resets all spawns for an arena
/sg refill – Refills the chest stock.
/sg reload – reloads part or all of the plugin.
Note: /sg can be interchanged with /survivalgames, /hg and /hungergames

SurvivalGames – SurvivalGames is the base plugin that allows this server to function correctly and allows the entire premise of the survival games to work. The documentation for this plugin is spotty at best and the best way to figure out all of the different utilization is to type the base command of /sg help in the server. Once you’ve looked through some of the plugin info you can decide whether you’d like to create your own maps or download ones that are available via a quick google search. Again, the documentation for this plugin is rough so the best that I can give you is to look at both the plugin link and all the permissions and commands listed there (some of which no longer work) as well as looking at the help command in-game in order to see what plugins do actually function. In addition to this, you also should know that some commands will throw errors or not show any functionality but they do actually work. To create an arena simply select an area with worldedit and type /sg createarena, once you’ve done that you can set the spawns for the arena using /sg setspawn (number) and you’ll be good to go!

VoxelSniper – VoxelSniper is the premiere long range map editing tool for Minecraft. It’s essentially a map editor and terrain editor whereas WorldEdit helps more with buildings and such. VoxelSniper can be complex to use and can be destructive in the wrong hands so make sure that you only allow players you trust to use it. The base command is /vs or /v but the full commands list can be found here: http://voxelsniper.wikia.com/wiki/VoxelSniper_Wiki There’s just too much that can be done with this plugin to even put into words. Want to carve out a valley or create a mountain range? Then VoxelSniper is the perfect long range editing tool for you. There are a variety of different brushes with a bevy of functions at your disposal with this plugin!

EssentialsX – Essentials gives us the basic necessities for running the server.

Multiverse (Core) – Allows for multiple worlds to be connected in one physical server.

ProtocolLib – ProtocolLib is used to modify Minecraft directly in tandem with SurvivalGames to allow the plugin to work. ProtocolLib is necessary to perform tasks that can be impossible to do with the standard Bukkit API.

Vault -Stores various data as well as allowing plugins to hook into one another and work as a conglomerate.

WorldGuard – WorldGuard controls the protection of the spawn area.