How To Get World Edit in Minecraft

Building in Minecraft is a relaxing experience, possibly even the most important part of the game, but as fun as it is, placing blocks one by one can easily become tedious. Large structures have hundreds, if not thousands of blocks in them, and putting each down manually is a laborious task — especially when you’re trying to think on a large scale.

What if there was a mod that changed this? That made building large-scale structures and terraforming enormous areas as simple as clicking a button? That let you cut, copy, paste enormous buildings between lands and worlds, without any fuss or having to leave the game?

WorldEdit describes itself as an easy-to-use, in-game map editor, and that’s exactly what it is. It allows for easy world manipulation, terraforming, sculpting and much more, and it’s easy to use to boot.

The main functions of WorldEdit include:

And installing WorldEdit is just as easy. This guide will explain how to install it, both onto a server and in singleplayer.

WorldEdit was made with as much compatibility in mind, and thus it comes in two forms: as a plugin, for servers that can load them, and as a mod, either for servers that use mods and can’t use plugins, or for use in single-player.

This guide will cover how to install both of these versions in any scenario you might need them in.

How to get World Edit in Minecraft

Installing WorldEdit as a plugin

Installing WorldEdit as a plugin onto your server is as easy as one-two-three. Following our How to Add a Plugin to your Server guide, which will cover how you’ll find it as an entry under the panels Bukkit list.

In the case that you’re installing WorldEdit manually, via FTP and as outlined in the guide, you can download WorldEdit on its official download site.

Installing WorldEdit as a mod on a server

If your server is instead a modded one, running either Fabric or Forge, you can install WorldEdit’s mod version and it will work the same as the plugin.

You can download WorldEdit’s .jar file on its official download page. Once you’ve done so, take a look at our How to Add Mods to a Minecraft Server guide for instructions as to how to add it to your server.

WorldEdit is a server-side only mod, meaning it doesn’t have to be installed onto any player’s computer in order to be used. Once it’s in the server, that’s it — it will work out of the box.

Installing WorldEdit as a mod on a client

Adding WorldEdit to a singleplayer game is just as easy, but the steps needed to be taken will depend on whether or not you’re installing WorldEdit onto a fresh Minecraft game with no mods, or adding it into a modpack you already have installed.

You’ll first want to download WorldEdit’s .jar file from its official download page, then choose which option suits you from the two below.
Installing WorldEdit from scratch

And you’re good! Simply launch the Forge profile the next time you start Minecraft, and WorldEdit will be there and working.

Adding WorldEdit to a modpack

To add WorldEdit to a modpack that you already have installed, you’ll need to locate that modpack’s installation folder and add WorldEdit’s files into the mods folder. Modern modpack launchers make this quite easy! Find yours in the list below, and follow the outlined steps.
Twitch

WorldEdit will be added to your modpack, and you’ll be able to use it the next time you launch it!

How to use World Edit in Minecraft Java

WorldEdit is quite large, but unless you’re digging really deep into its obscure functionality, the main things any user of WorldEdit will want to bother with are Selections, Brushes, and Schematics. Having knowledge of how each of them functions and how to make it work is integral in becoming a true WorldEdit user — they’re all interconnected in one way or another, and complement each other’s functionality.

Of course, there’s far more to WorldEdit than just basic selections, brushes and schematics. If you wish to know more, look no further than WorldEdit’s official documentation.

A selection is, essentially, a box in the world, containing all the blocks bounded by its area. Selections are made by establishing two points — think of them as two corners on the opposite end of a box, connected by a diagonal.

Establishing these two points is simple. The three main ways are:

With a certain area selected, you can then proceed to modify the blocks within it! Some fundamental selection manipulation commands are:

And many, many more. Check out WorldEdit’s Region Operators documentation for more commands and examples!

Brushes are, as the name suggests, tools that let you paint the world with blocks and shapes. They’re perfect for just about anything, from building to terraforming to sculpting, and they’re just fun to use besides.

In order to use a brush, you’ll need to hold an item in your inventory and “bind” it to a specific brush configuration with a command, which means the item will become that specific brush with that specific function. This is handy because it lets you alternate between many different brush types quickly and easily, without having to type in commands every time you’d like to.

You can find a list of all brush types in the official brush documentation, but some of the most commonly used ones are:

WorldEdit schematics are files, stored on either your computer or the server’s directory, containing a selection, for later use.

After copying a selection, you can turn it into a schematic with the //schem save 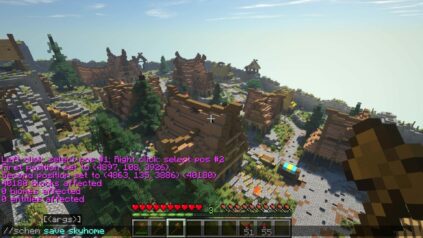 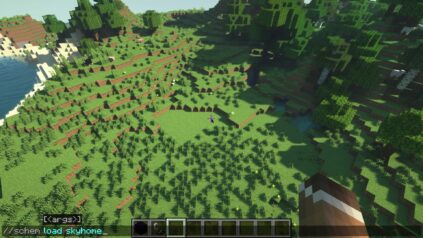 If you’d like to move, transfer or send schematic files from one server, world or computer to another, you can find them in the following locations:

WorldEdit lags or crashes when spawning large schematics!
If you find WorldEdit is lagging or crashing when trying to load in large schematics, you might find luck by adding the AsyncWorldEdit plugin on top of it. It will mitigate many of the performance-draining functions by spreading them out over time and multiple threads of the CPU, leading to far fewer crashes.

WorldEdit says I don’t have permission to use it!
Once WorldEdit is up and running on your server as a plugin, you’ll need to set up permissions for it, the same as with any other plugin. Either make yourself a server operator or set the permissions up with a permission manager plugin. You can find a list of WorldEdit permissions in its official documentation. If you’re unsure how to set them up on your server, review our LuckPerms guide.