How To Play Minecraft Online 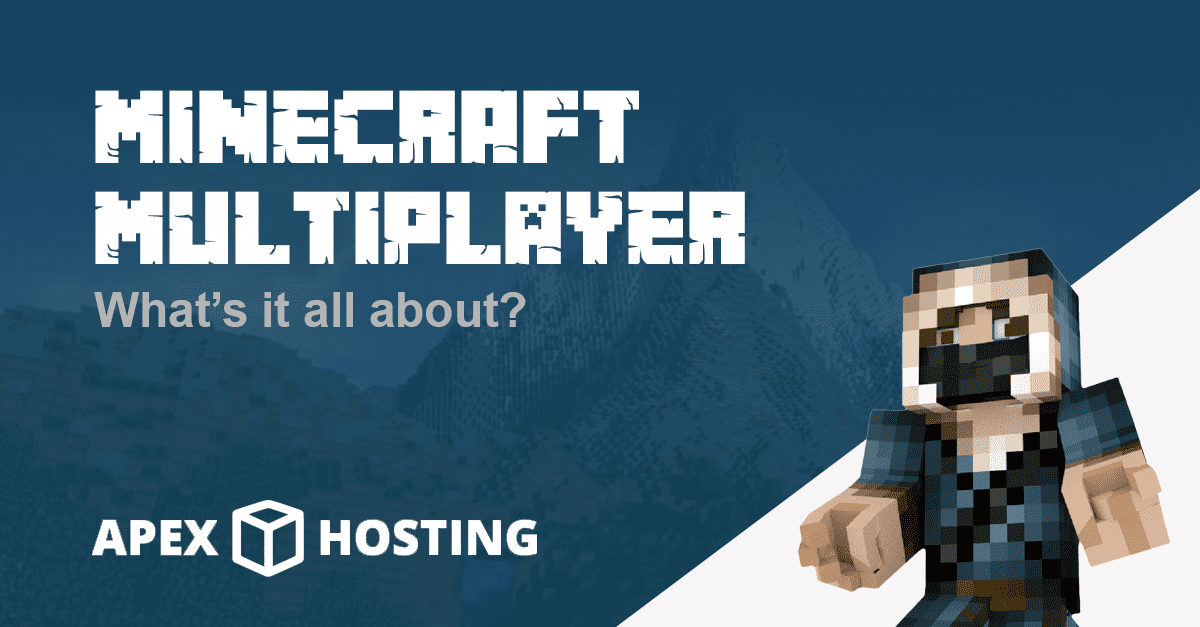 Minecraft alone is a great game to play by yourself, but after awhile you’ll probably want to start playing with family, friends, or others. After conquering your world in single player you can opt to expand your gameplay by switching to a multiplayer server. These multiplayer servers allow 2 or more players to play Minecraft together through self-hosting or a Minecraft hosting service such as Apex Hosting. You can then connect to these servers from anywhere if you have the server address and permission to join it. Once joined you can then begin interacting with the world in cooperative gameplay with the other players. When joining a public server, it’s best to review a server listing for well-maintained servers instead of randomly joining one. Reviewing listings also offers you a quick way to vet its features and find the server that’s right for you. Servers can offer different gametypes, mods, and plugins to switch up the way you play Minecraft.

Before connecting to a server you will first need to know its server address. Since the Minecraft client does not offer an indexing tool for these servers, you will have to review a listing site that specializes in listing servers. Some popular server listing sites include:

Sites like these offer you the means to quickly browser and filter thousands Minecraft servers based on your preferences. As you review these sites you will be presented with a top pick of the more popular servers, along with information on the features offered by each. At which point you can also review each for one that pertains to your interest and then join it by obtaining the server IP or URL.

Connecting to a Minecraft server is fairly straightforward once you’ve obtained its server address. You begin by first launching the Minecraft client, then once you’re at the Main Menu, select the Multiplayer option. The following screen is your gateway to the thousands of servers being hosted over the Internet. To access them we can choose to either do a Direct Connect or Add the server. 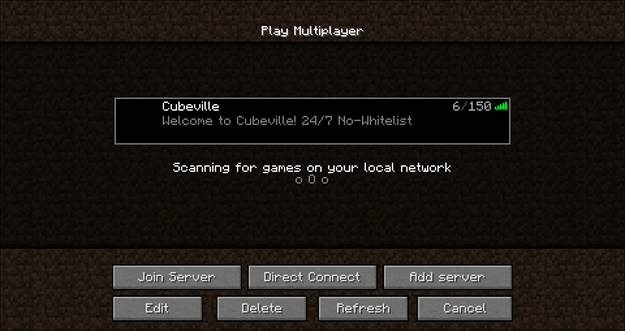 A Direct Connect, as it would imply, connects you directly to a server that is online by using the server address. When you select this option you are given a small input field for the Server Address. Once entered, press “Join Server” and if the server is online and functioning as intended, your player will be loaded onto it. Alternatively, you can opt to Add the server to your Multiplayer list. The added benefit to doing this over a direct connection is that you can save time by quickly rejoining without having to re-enter the server address. To join a server on the list, simply double-click it. Additionally, you are given information about the server like whether or not it’s online, your connection rating to the server, the server’s MOTD (Message of the Day), and active players connected. As you build up your bookmarked servers, you can easily manage them from the Multiplayer list as well as get an overview of the status of each. Now when attempting to join a server, it’s important to note an aspect about the relationship between the server and the client that’s (you) trying to join it. In order to join a server, you need to be using the same Minecraft version as it. So if a server is running with Minecraft version 1.10.x then you need to be running version 1.10.x in order to connect. Another aspect you should note, that may affect your ability to connect, is the restriction level of the server. Some servers that are publicly listed are not always publicly accessible with just the server address. Servers like this are known as Whitelisted or Gray-listed servers and require some form of pre-approval before you are able to join and play on them. While this action may seem inconvenient, servers that implement this step do so to deter potential griefers from joining.

Multiplayer game play allows two or more players to interact in Minecraft together. As if Singleplayer wasn’t great enough, you can now play with friends and friends you haven’t met yet in cooperative gameplay. Co-oping with other players opens you to new selection of possibilities like building bigger and better creations in less time or interacting in friendly competition. 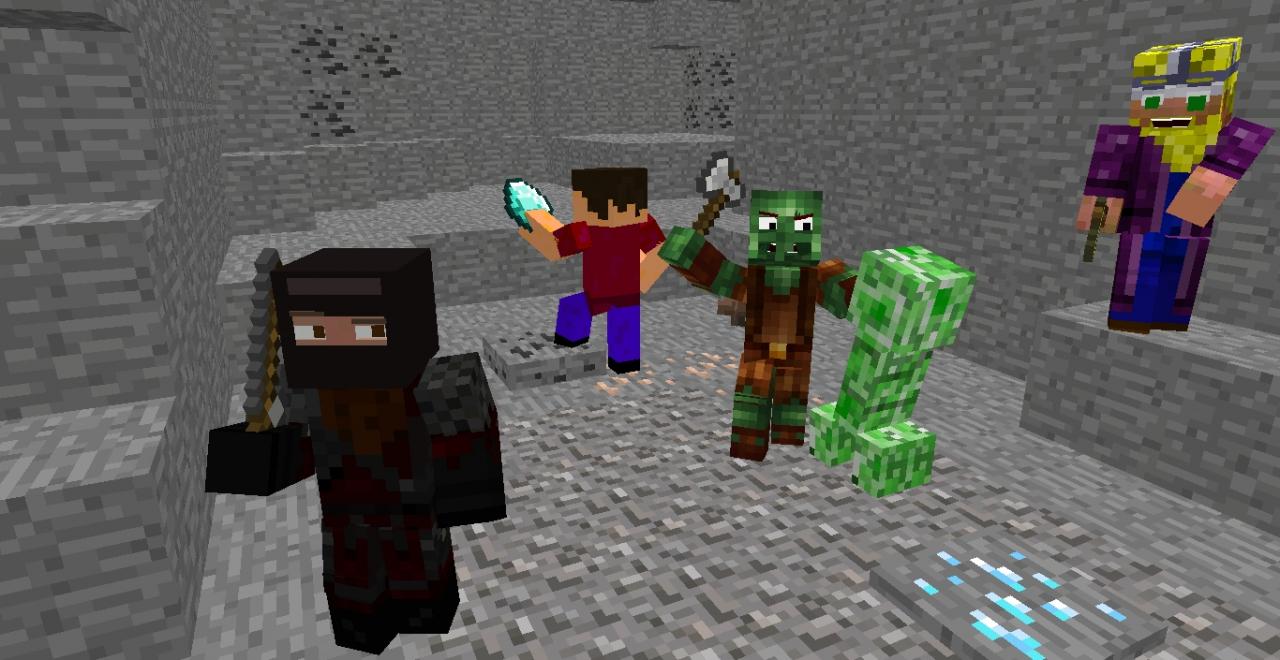 When interacting, your main form of communication on serves will be via chat. On the bottom-left hand side of the screen is the chat window, where you can send and receive messages. The default key to type messages in the chat is the “T” and “Enter” key. As you chat on a server you are generally voicing your statements publicly which may be monitored. With this in mind it is important to remain respectful to other players on the server verbally in order to maintain a positive status on the server. Apart from textual interactions with other players, you can also take part in physical inter-game play. Where in single player it is just you and your companions, Multiplayer enables you to team up with other individuals to accomplish tasks like building cities, conquering new lands, and defeating bosses. You can also take part in PvP (Player vs Player) events where you fight to defend what you’ve brought up or to plunder in the riches of others. If that’s not enough for you, in addition to survival gameplay, many servers have been custom tailored to offer their players new themes like Capture the Flag, Kit PVP, The Hunger Games, and dozens of other mini-games.

In Singleplayer, users have access to certain commands if cheats were enabled on the world. Similar to singleplayer commands, a multiplayer server can also access and utilize commands. Players on the server can utilize these commands to easily navigate and access certain features and functionally that would otherwise be unavailable to them by simply interacting in the world. Server commands are advance functions activated by typing certain strings of text into chat preceding with a “/”. If you’ve ever played Singleplayer with cheats enabled, you may be familiar with commands like “/gamemode” or ”/time”. Server commands function much the same way, but require permissions to access and include all the standard Minecraft commands instead of just the ones applicable to singleplayer worlds. Depending on how the server has been setup, you may have access to a set of commands starting off. Commands are managed and administered by the owners of the server and only be used if your player has the correct permissions.

Playing Minecraft online with others can be a ton of fun, but it’s important to understand and remember that playing on a public server means playing with strangers. Its inherit to dismiss the potential dangers in the blocky sandbox game, but it’s no different than interacting with a stranger in person. While online, anybody can assume a persona. As such, you should be weary of disclosing any personal information and who you choose to interact with. In addition to playing with others, you are also subject to the rules of the server you play on. Some publicly accessible servers have themes rated for mature individuals and as such can be a harsh environment to play in if you are not suited for it. While the majority of players on these servers share the common goal of creation and to have a good time, some seek to have their fun by through malicious acts. Such acts can include PKing (Player Killing), Griefing (the destruction of one’s creation), use of foul or vulgar language or inappropriate player skins. With this in mind, be safe, make friends, enjoy the co-op gameplay, and try out new servers but remain vigilant to the possible dangers. https://www.youtube.com/watch?v=Y2aDSSqLfCE