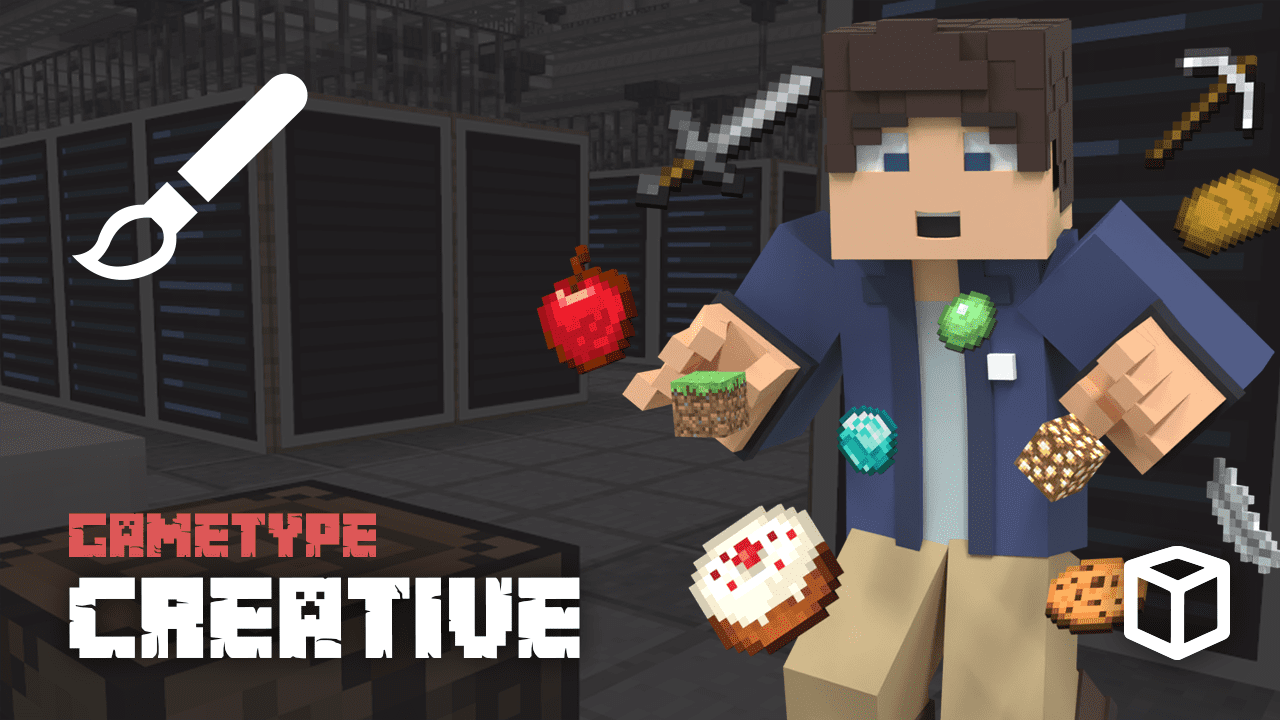 The creative game mode has obviously been around for ages, since Beta 1.8 when Mojang FINALLY gave in and gave Minecraft players a way to infinitely create without mods or hacks of any kind. After this creative servers became commonplace and players flocked to them as creative outlets for anything they could think of to build. Creative is a game mode that allows you to build infinite structures with access to every block in the game immediately. This makes for some amazing projects and machines being built. As we here at Apex Hosting encourage our clients to allow Minecraft to bring out their creative side it only makes sense that we’d offer a pre-made creative game type for you to enjoy. Simply select the Creative drop-down from your game type menu and our pre-made server will be immediately installed. The server has a plot world and a few premade ranks for you to enjoy as well. In addition to having editing plugins such as WorldEdit and VoxelSniper ready to go for your use and for the use of the players on your server. Don’t worry about players destroying the plot world or griefing one another as the plot world plots immediately offer protection within them as well as limiting WorldEdit and VoxelSniper so that they can only be used within plots! With our enhanced creative server you’ll have plenty to do and plenty to create!

When you start off in our Creative game type you’ll spawn onto the top of the spawn building with some information about the server and what you can do on it as well as rank information and some info about the main plugins that are installed. Once you have an understanding of how the server works you’re free to fly off into the plot world and begin building! If you’re an owner you’ll obviously want to op yourself via console! The ranks on the creative server essentially allow for creative progression. Once a player has built something and you approve you can rank them up! Higher ranks gain access to more building tools eventually at the higher ranks they can also teleport to the “FreeBuild world” where they can build in creative in a normal terrain map. But make sure that these ranks are only given out to players you trust because these tools can cause problems when they are wielded in a way that they were not intended to!

All info on plots can be found here – https://github.com/IntellectualSites/PlotSquared/wiki

The ranks can be edited using PEX to add or remove ranks/ perms.

Armor Stand Tools – This plugin allows for full configuration of armor stands. You can move and mold them in any way and equip them with any items. The only limit is your imagination.

Head Plus – This plugin has thousands of player heads that can serve as decoration on builds and can be used by players on the server at any time simply by using the /heads command. This command opens up the GUI for the plugin and allows the player using it to pick out any head that they’d like there is also a search function in order to find themed heads related to whatever the player is building.

PlotSquared – PlotSquared is a plots plugin for Minecraft that is perfect for creative servers. It generates worlds or individual plots that cannot be built in by other players other than the original one that claims the plot. Unless that player chooses to trust another player. This includes WorldEdit and VoxelSniper. With these infinite plot worlds, your players will never be without a safe place to build. In addition to this PlotSquared also allows you to merge plots together making large scale mega plots for bigger builds. In order to merge plots you simply have to claim plots that border one another and then type /plots merge (direction) with direction being the direction of the plot that you would like to merge with the one you’re standing in. For this plugin /plots is the base plugin that will let you access all others and see what their usages are. /plots claim is the command that you’ll use to claim a plot and /plots delete is the one to remove a plot from your claim.

Rifle’s Chairs – This is a simple plugin that allows for players to sit on items like stairs slabs and more.

Holographic Displays – Allows the server owner or staff members to create easy to see and edit displays that can be used to relay information in a clean and timely manner to players.

Multiverse (Core) – Allows for multiple worlds to be connected in one physical server.

PermissionsEx – This is the basis for all permissions on your server.

Vault -Stores various data as well as allowing plugins to hook into one another and work as a conglomerate.

WorldEdit – Tool used for editing the physical Minecraft world on your server.

WorldGuard – Set up different flags for specific areas on your server (or entire worlds) that you would like to protect.

How To Make a Creative Server With Apex Hosting