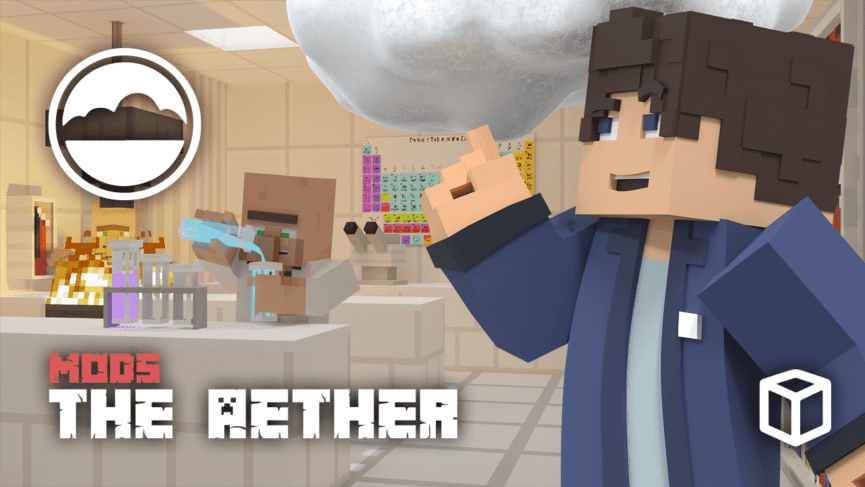 Exploring in Minecraft leads players on unique adventures, especially in servers with others. Whether you’re surviving in the Nether or flying around in The End, these areas offer a wide variety of activities to enjoy. However, over the years the game can become boring for some due to the lack of new locations. This problem isn’t old in Minecraft’s community, as one 2011 Forge mod proves that by completely adding a new dimension. Introducing The Aether, a classic modification that brings a new world, mobs, resources, and equipment to life. This has been an extremely popular addon to the game since it involves many new and exciting features. For example, there are bosses and dungeons to conquer that provide powerful loot. Luckily, if you’re wanting to try this out with friends, then installing it is easily done with our simplified panel. With this in mind, we’ve created this Apex Hosting tutorial to show you how to install and play The Aether mod on your Minecraft server.

Make sure to have Forge installed on your Minecraft launcher for this process, as it’s required.

After preparing the Minecraft launcher, you’re ready to install the mod on your server.

Upon joining the world, you’ll notice nothing has changed in-game. This is intentional since the mod has all its features in the new dimension, meaning you’ll have to access it to begin. Once transported to the other world, there are floating islands all around you with interesting mobs on them. There will be new ores and resources to collect, leading you to craft powerful gear. However, there are dangerous areas and creatures to encounter that may bring your demise. We’ll be showcasing how to enter the Aether dimension and important tips to help you survive.

In order to reach the new world, you’ll have to first collect Glowstone for its portal frame. This is typically found in the Nether, but can occasionally be acquired through Villager trades. Once obtained, build the portal as you would normally and use a Water Bucket instead of fire to ignite it. This will activate the Aether in your world, making it possible for anyone to enter it. Make sure to have plenty of building blocks, food, and other resources to start your new adventure. 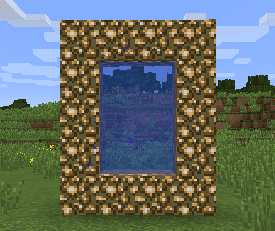 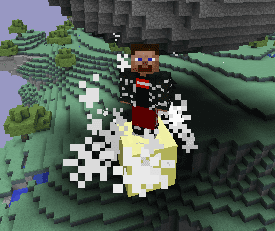 When you and others enter the Aether dimension, you’ll instantly find yourself in an unfamiliar world. Depending on your spawn location, you can see blocky clouds high in the sky with islands surrounding them. It may be difficult to move from one spot to another, but you’re given a Golden Parachute to safely navigate the environment. Players can right-click while holding this item to gently fall down towards their destination. Search for a good place to begin your journey, but don’t waste the parachute’s durability in the process.

When you’ve found a suitable area in the dimension, start mining Skyroot Trees to collect their wood. This allows you to create needed materials to craft new tools and weapons. The second tier of items to create is Holystone, which is essentially normal stone. Their recipes are vanilla, meaning players can craft a pickaxe normally with the modded materials. Similarly, the surrounding environment also follows vanilla-like mechanics, such as saplings falling from trees. There are tons of other resources available to you, with some being more sought after than others.

There are three types of ore to find in this world, Ambrosium, Zanite, and Gravitite. The first is basically coal, as it allows you to create torches to light up the darkness. As for the other two, they’re used for crafting equipment. This makes both valuable and useful to every player, but each one has unique properties to them. For instance, Gravitite ores must have blocks above them so they don’t fly away. This makes finding them a bit tricky, as they aren’t your average minerals. Zanite is the most common one to find and use for armor, weapons, tools, and cosmetic items. Locating any of these ores involve you mining into the islands or randomly stumbling upon them in Holystone blocks.

Each craftable item from these ores follows the normal recipes, but some require different ways to be made. A great example of this is gravitite gear, as it needs to be smelted in an Alter before being used. Once enough materials have been collected, there are multiple pieces of equipment to make. Due to this, we highly recommend using the Just Enough Items mod to find their recipes. Whether you’re wanting to make cosmetic armor like rings or tools to help you build, this modification provides you with needed information for them.

If you’re wanting to truly understand your new equipment or materials, then using the Book of Lore is needed. This item is automatically given to you from the start of entering the Aether dimension. Simply open the book and place an item inside it to begin reading about it. This is a wonderful way to see if a certain material is stronger than what you have or if it has special abilities. For example, reading about the Zanite Pickaxe shows you that the lower its durability, the faster it breaks blocks. 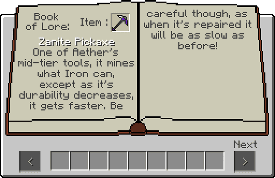 If you haven’t noticed by now, there are tons of creatures from The Aether mod that are both hostile and passive. These range in size, strength, and abilities, so be careful when exploring. With the common theme of floating islands, structures, and sky-like adventures, some of these mobs can fly. However, since there are many different types to learn about, we’ll go over the most common ones to find. 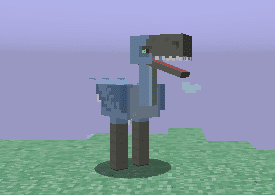 One of the first mobs on our list resembles a dinosaur type called Moa, which is completely hostile towards any player. If you find yourself in combat with this creature, you’ll notice they shoot at you. Once you’re hit with this projectile, an inebriated status effect is given to you. This makes your character involuntarily move around and have distorted vision. Steer away from moas, unless you want to collect their Feather item drop. 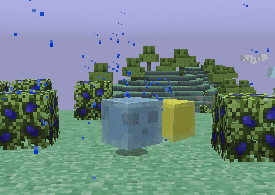 The second on our mob list is a slimy creature called Swet, which comes in blue and yellow colors. These are also hostile towards players and will attach themselves to their characters, hurting them in the process. They may also fly around while having you in their grip, making them a dangerous foe to encounter. However, they have a few item drops that may be useful to players, which includes Glowstone, Aercloud, and Swet Balls. 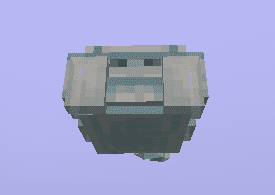 As for the last mob, it’s a cold cloudy creature called Zephyr that spits giant snowballs at players. This is hostile and should be avoided, but is relatively harmless since they tend to be in the sky all the time. The only items dropped from them are Aercloud blocks, making them not worthy enough to hunt down. If you do find yourself fighting zephyrs, you’ll immediately notice they are weak and frail. 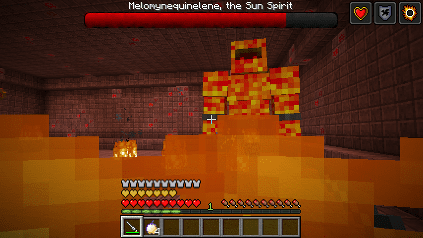 Aside from exploring islands and mining minerals, you may encounter unique structures that are either large or small. These are dungeons, with some having traps and dangerous creatures roaming inside of them. A common one to find is a stone-like maze with chests scattered around. Half of these have loot while the others are monsters, which will endlessly attack you. However, there are special rooms with bosses that may require specific interactions to initiate the fight. There are three main ones to uncover, Valkyrie Queen, Slider, and the Sun God. The latter one needs the player to spark dialogue before fighting it, with the others needing items or simply being attacked first. After defeating one of these bosses, a key is dropped to open a chest filled with powerful items. Be cautious though, as the fights can demand a lot from you.

If you’re unhappy with how The Aether mod acts in-game, then tweaking its settings is suggested. This allows you to alter the world generation, gameplay mechanics, and spawn rates for mobs. For example, disabling specific items in dungeon loot chests is possible. It’s important for server owners to have control over the modification’s behavior, which is done by following the instructions down below.

In cases where The Aether isn’t working on your Minecraft server, double-check to see if you’ve downloaded the correct game version. There are only two options to use, 1.7.10 and 1.12.2. This is important since the version must match your server’s type, but also needs to be on Forge too. Once this is confirmed, ensure you’re installing the mod in the correct FTP directory. This should be in the mods folder and has to reach 100% after you upload it. Once everything looks good, give the server a Restart so The Aether can successfully load in-game.

After tweaking the mod’s settings, make sure you Save the changes in the file editor. This is absolutely necessary to ensure your edits get saved correctly. However, double-check that you aren’t mistyping or accidentally removing required characters in the configuration. For example, deleting a space or capitalizing an option may break the file. When you’re certain everything is correct, continue to Restart the server so it applies your changes. Although, sometimes the server has to be stopped before making any edits to the file.

If you or other players are timing out while playing with The Aether, then it could mean the server is lagging. Assuming this is the case, then review our modded optimization guide to increase your performance. However, most of the time the cause will be first entering the new dimension and can sometimes be unavoidable. If this appears to be happening, then simply reconnect to the server to resolve the situation.