Minecraft is a complex game, featuring hundreds of different items and recipes making it very easy to get lost in keeping track of all of them. Add Minecraft mods on top of that, and it becomes downright unwieldy. The in-game recipe viewer can be of help, but it’s often clumsy to use and doesn’t contain many of the recipes added by mods.

Luckily for us, there are mods to help with that! Many items and recipe viewer mods have come and gone throughout the years, but a notable name that has stuck around is NotEnoughItems. In this article, we’ll be describing NotEnoughItems, explaining how to install it, and how to effectively use it.

Standalone or an add-on?

Because of its development history, two distinct ‘versions’ of NotEnoughItems exist. The version for Minecraft 1.8 or lower can be categorized as a standalone, whilst the versions for Minecraft 1.9 and above are add-ons for JustEnoughItems, another mod with similar functionality.

As a standalone version, NotEnoughItems is fully-featured — it has the search bar, recipe viewer, control panel and inventory saves, and it works on its own. It isn’t dependent on JustEnoughItems to function (in fact, JustEnoughItems doesn’t even exist for Minecraft 1.8 and below!), so there’s less overhead too.

Alongside the standalone and addon division, there’s another important facet of NotEnoughItems to consider: its ability to function as either a server-side mod, a client-side mod, or as both.

The terms server-side and client-side denote where, exactly, the mods run — whether on a player’s computer, on the server, or on both. If you have a client-side only mod installed on your computer, then that mod doesn’t need to be installed on a server, too, in order to be able to use it on that server.

Such is the case with NotEnoughItems (and by extension, JustEnoughItems). If installed only on your own computer, it will run perfectly fine. Certain, small configuration features will be missing if it isn’t on the server as well — notably, selecting who’s able to use features like its creative mode toggle, weather control, magnet mode, and similar — but other than that, it will work absolutely fine.

NotEnoughItems features’ will depend on whether or not it’s installed as a standalone or an addon, as explained above.

As a standalone, NotEnoughItems offers:

How to install NotEnoughItems

If you’re convinced and would like to give NotEnoughItems a try, getting it installed and working is pretty simple.

The installation of NotEnoughItems will depend on a few factors — whether you want to add it to an existing modpack, or if you want to install it onto a fresh Minecraft installation, as well as the version of Minecraft you’re adding it to. It’s pretty easy, either way!

As we’ve already established, depending on the version of Minecraft you’re getting NotEnoughItems for, it can be either a standalone mod or an add-on for JustEnoughItems.

Because of the version differences, NotEnoughItems’ downloads will differ, based on the Minecraft version you’re getting it for.
Minecraft 1.8 or lower

How to install NEI on a Minecraft Server

How to install NotEnoughItems from scratch

After you’ve installed Forge, you need to open your Minecraft installation folder: 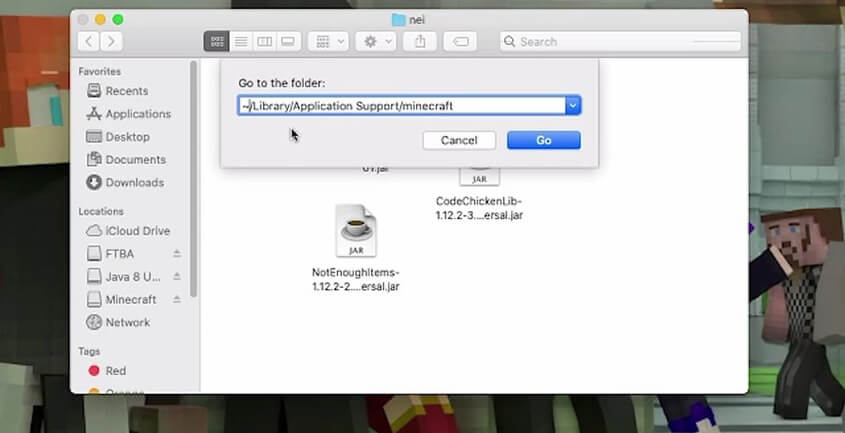 If you have already installed Forge and mods, then all you need to do is add the .jar files you’ve downloaded into the mods folder. If this is the first time you’re installing mods, you might need to create a new folder and name it mods, then drag-and-drop the .jar files into it.

And that’s it! Once you’ve put NotEnoughItems’ and its dependencies’ .jar files in the mods folder, they will be added to Minecraft the next time you start it using your Forge profile.

How to add NotEnoughItems to a modpack

Adding NotEnoughItems to an already-existing modpack requires you to find that modpack’s installation folder, then drag-and-drop the NotEnoughItems .jar files we’ve downloaded into it. Luckily, modern modpack launchers make this quite easy. 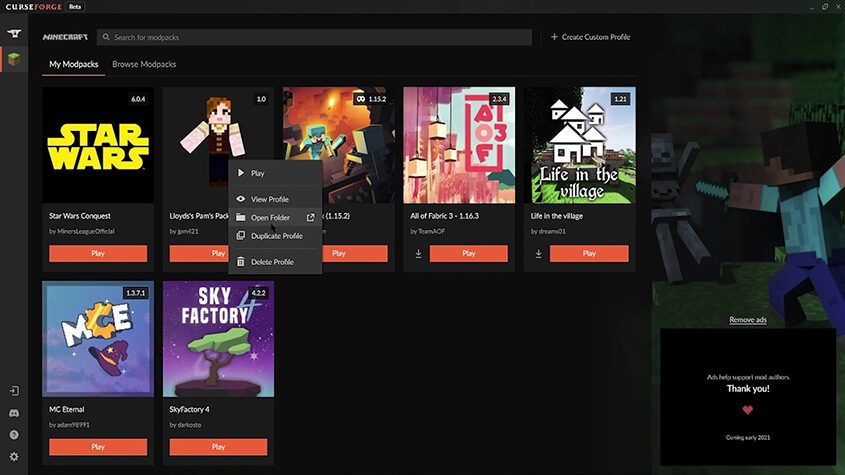 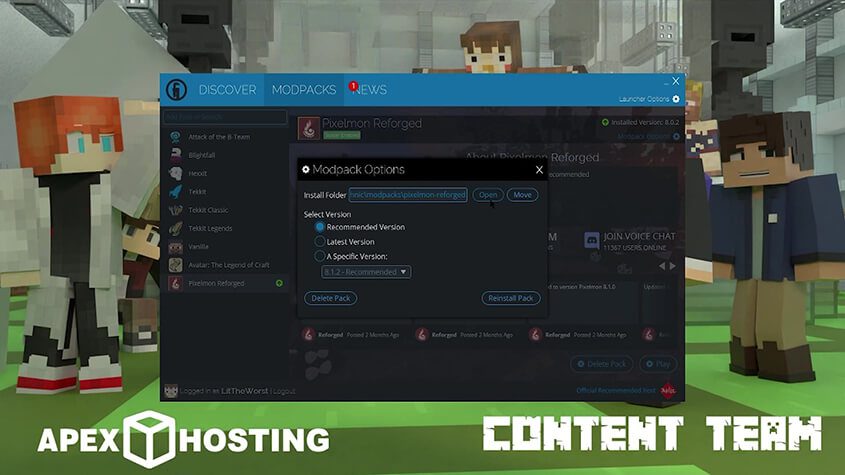 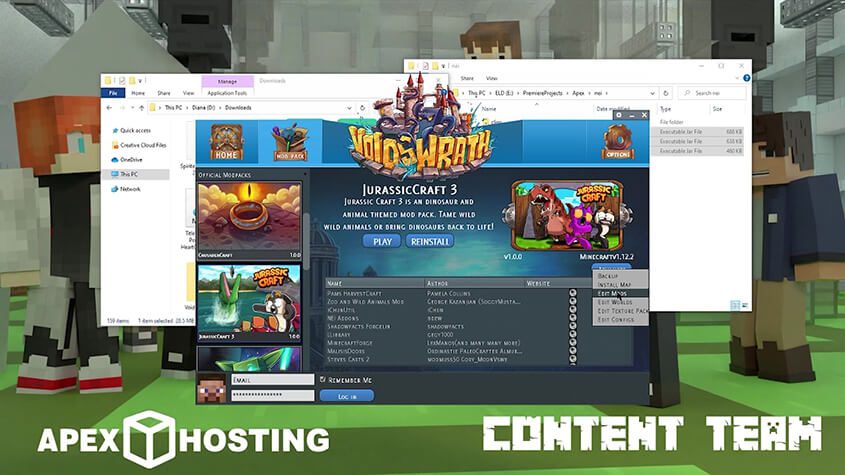 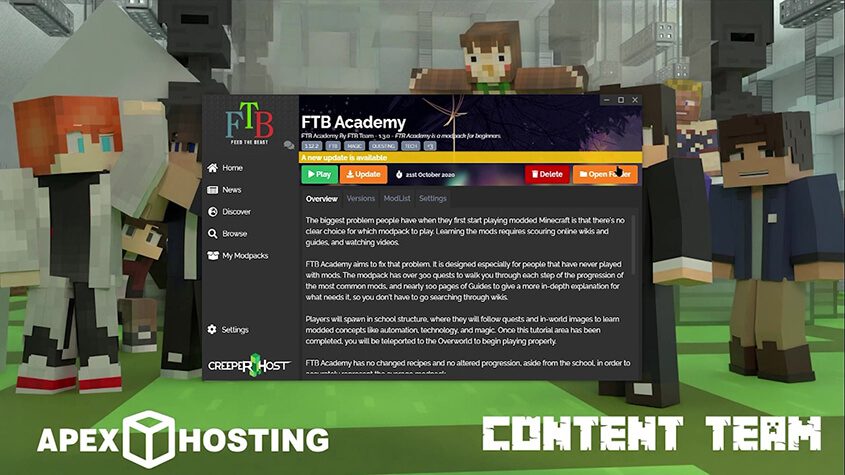 NotEnoughItems works right out of the box. To access its menu, simply open your inventory. You’ll be greeted by the item viewer. The buttons might look a little bit different on your end, depending on the version and settings, but the layout and functionality are the same. 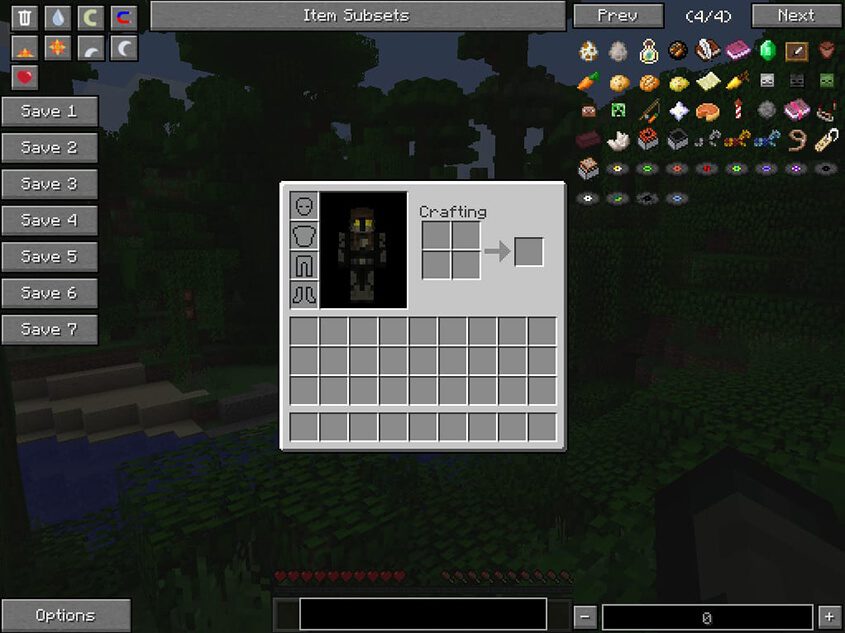 In case you’re playing singleplayer and your screen is missing the cheat and item preset buttons on the left-hand side, you will need to:

To the right of the inventory is the bread and butter of NotEnoughItems — the item and recipe viewer. It lists all items, both from the base game and from any other mods you might have installed. To view an item’s recipe, simply hover your pointer over it and right-click! If you’d like to add the item do your inventory instead, left-click it. Changing the counter on the bottom of the item viewer changes the number of items you’ll be given. 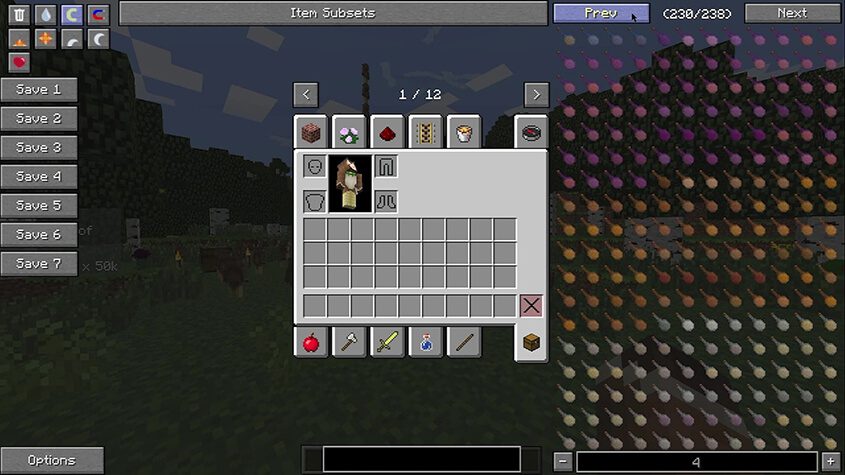 To navigate through the pages, you can either use the Prev and Next buttons found on top of the item list, or your mouse’s scroll wheel with your pointer hovering over the panel.

The Item Subsets drop-down menu, found on top of the screen, lets you filter items. Left-click to enable an item or a group of items, right-click to disable.

On the top left, you’ll see a collection of cheat buttons. If you’re playing on a server, these can only be used by an operator. Hovering over each one will show its function as a tooltip; pressing it will cause it to do its function — for example, set the world time to dusk, change the gamemode, or heal the player.

Likewise, underneath the cheat buttons, you’ll find a list of item presets. By default, they’ll say Save, followed by their number in the list. Pressing on Save will save your current inventory loadout, and pressing on the preset button — now named Load — will load it back in. To delete a preset you don’t want to use anymore, simply press X to the side of it. For servers, this is also an operator-only function.

The cheat buttons let you quickly enact some handy commands, such as changing the time of day, gamemode, or healing yourself. If you’re playing on a server, these are only usable by server operators.

The preset buttons allow for saving and loading of inventory presets, so you can quickly go back and forth from one inventory state to another. Similarly, if you’re playing on a server, this is also only usable by operators.

Mods are tools — whether they add new features to play around with, extend already existing ones, or provide options for more efficient gameplay, they’re there for the player. It’s important to know your options, and even more important to know how to effectively use them — and inventory mods, such as NotEnoughItems, are integral to this.