Where to find the crash reports 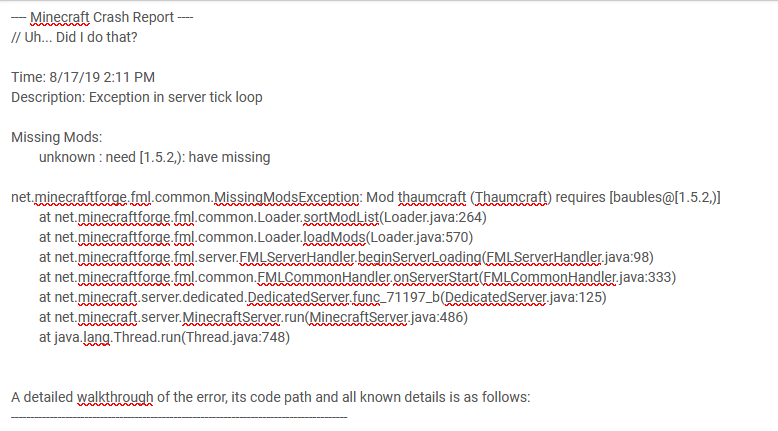 This is the top portion of the report where it will have the date, time and stack trace. The stack trace is a report of when a program runs at a certain time in its execution. This will be primarily where we will discover the error that is causing the server or client to crash.
It looks like a lot but by looking carefully we can deduce the error by picking certain parts of the stack trace out. In this example, we can tell that a mod is missing due to part of the stack trace saying “Missing Mods: unknown : need [1.5.2,): have missing”. If we go down to the next line we can see that it tells “net.minecraftforge.fml.common.MissingModsException: Mod thaumcraft (Thaumcraft) requires [baubles@[1.5.2,)]” which translates to the mod Thaumcraft needs the mod Baubles version 1.5.2 in order to run properly. 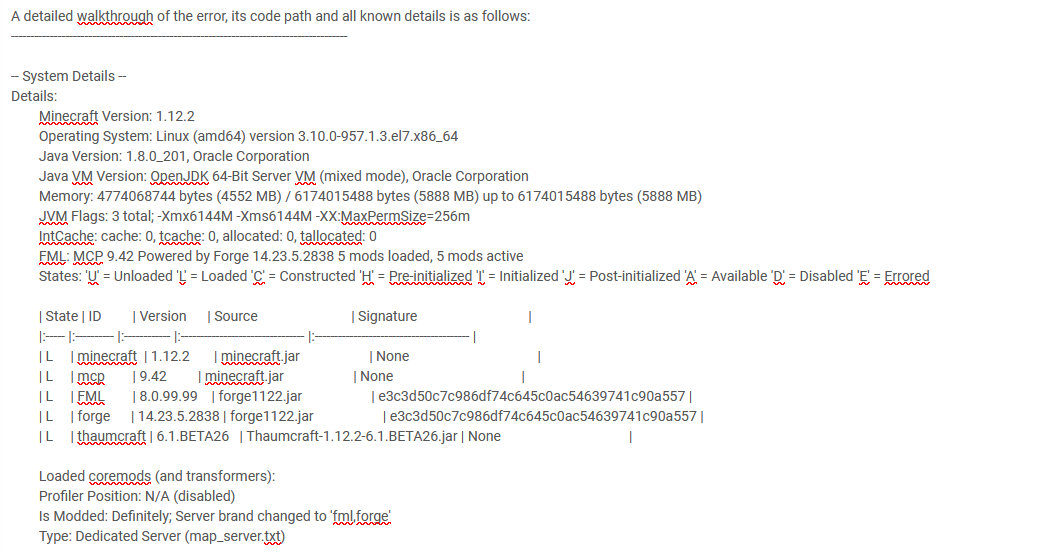 The second half of the crash report will go over your system details and the states of the mods loading in. This can be very important especially with client-side crashing as you can find our what version of Java they are running, how much ram they have allocated and the versions of the mods to be able to assist them. One of the best tools with crash reports is knowing the States in which a mod loads in. These states are as follows: ‘U’ = Unloaded ‘L’ = Loaded ‘C’ = Constructed ‘H’ = Pre-initialized ‘I’ = Initialized ‘J’ = Post-initialized ‘A’ = Available ‘D’ = Disabled ‘E’ = Errored
You can see these states to the left of each mod. In this example, they only made it to the loaded state. So if you have a mod that was UCE that would mean the mod Unloaded, Constructed and than Errored which means there was an error with loading that particular mod causing it to crash so you now know what the exact mod causing the issue is and can look into why it’s occurring.

There are hundreds of different reasons that your server may crash, it can be from a world issue, server jar, mods, and far more. As long as you can narrow down what the reason is, the solution should come easier. If you can narrow down it’s a world issue, you can Google the error line to see if there are any solutions or you can restore a backup. With so many different solutions to so many different problems, there isn’t a way to break down each individual error you can get.