Setup and Play a SevTech: Ages Server in Minecraft

Vanilla Minecraft is often very repetitive, you spawn in, break some trees, and begin crafting. This can become even more monotonous when multiple players team up on a server, leaving them to desire more challenging gameplay. Introducing SevTech: Ages, a modpack that turns Minecraft gameplay upside-down and completely redefines how you interact with the world. With Apex Hosting, it is extremely easy to set up and play a SevTech: Ages server, so today we’ll cover how to get it installed and start playing!

The 1.12.2-based SevTech: Ages is owned by darkosto on CurseForge, with author credit given to Firstnecron. With over 250 mods, this pack focuses on rebuilding the progression of the game, removing the blocks and tools you’ve come to know and love. With the age system, progressing through the advancements will unlock more and more gameplay elements.

The modpack is also set for more updates, adding more content to the advancements and endgame. With that said, let’s go over how to get it installed!

This age introduces you to the main mechanics of the game, providing a tutorial guiding you through how modpack works. There are no ores available at this time, requiring primitive methods of gathering sticks, rocks, and plant fibers. To advance from this stage, you must obtain all of the achievements until you complete the Tinkers’ Construct Melter advancement. 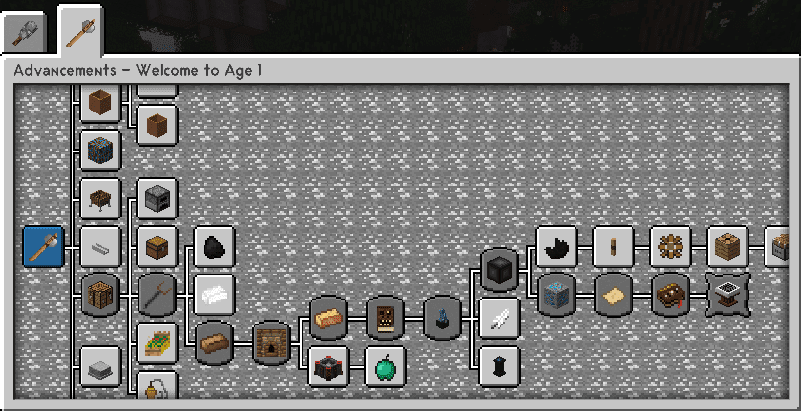 The first real age of this modpack, copper and tin are revealed, allowing the creation of bronze. This stage also includes ceramics and magic. In this stage, a proper crafting table as well as tools to farm normally. To advance, you must upgrade the crafting table to a luminous crafting table.

The Medieval Age introduces more ores, including iron, gold, lapis lazuli, and rock crystal ore. It also introduces more aspects of the Tinkers’ Construct mod, exploration, and the astral sorcery. While the stage appears easy, it requires the player to access the Twilight Forest and Betweenlands, requiring lots of exploration to create the coal engine and advance. 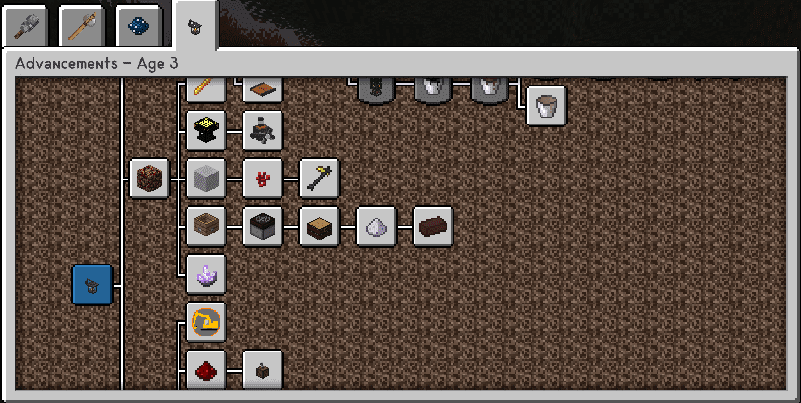 The Industrial Age reveals even more ores, including redstone and platinum. You can now access the nether and begin generating electricity. This age revolves around collecting numerous materials from nether bricks, steel, oil drilling, and power to create plastic. To advance, a piece of plastic must be crafted. 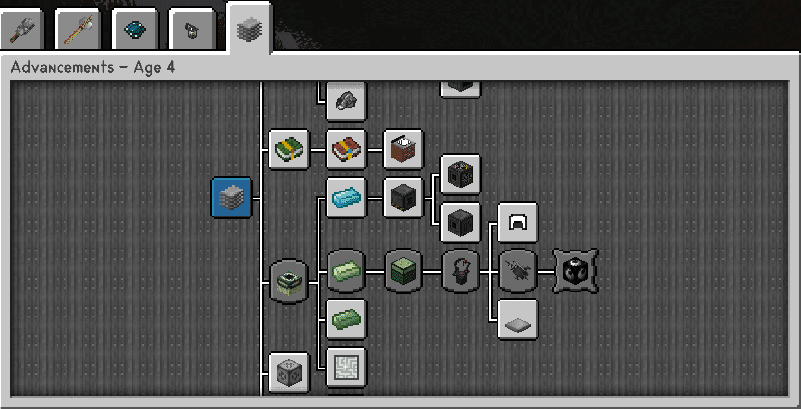 Coming up to the Modern Age, it introduces cobalt and ardite, which can also be used to make manyullyn. The End is now accessible and features several advanced tech mods, such as Applied Energistics, Galacticraft, and more. In order to progress, a rocket must be launched and successfully land on the Moon. 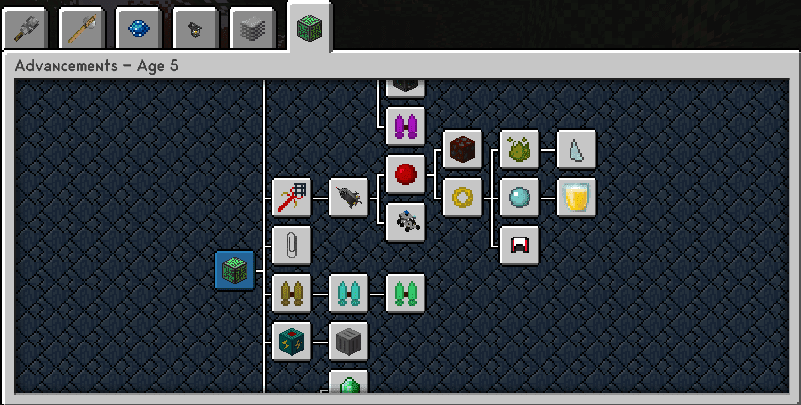 The Futuristic/Creative Age is the final one found within the modpack. Multiple ores are once again revealed, from diamonds, emeralds, and uranium appearing in the overworld. While there is no main requirement for the next stage, some of the advancements revolve around killing bosses, creating advanced blocks, and other tools.

How To Get Started:

Upon first spawning into the world, the first thing you may notice is that breaking trees doesn’t drop any wood. This is an experience you’ll get used to, requiring different methods to get started. By default, you can press the “L” key to open the modpack’s advancement menu and see what you need to do.

The first items you’ll want to collect are rocks, sticks, and plant fibers. All of which are found around the overworld, with plant fibers found by breaking grass. 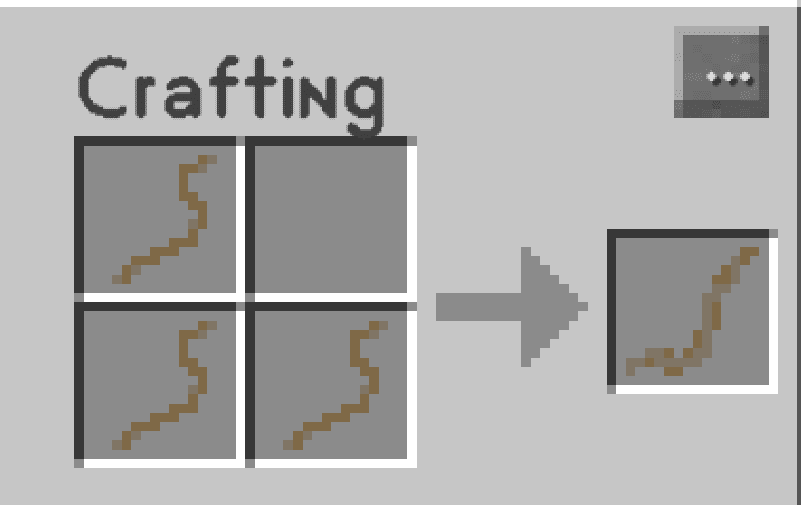 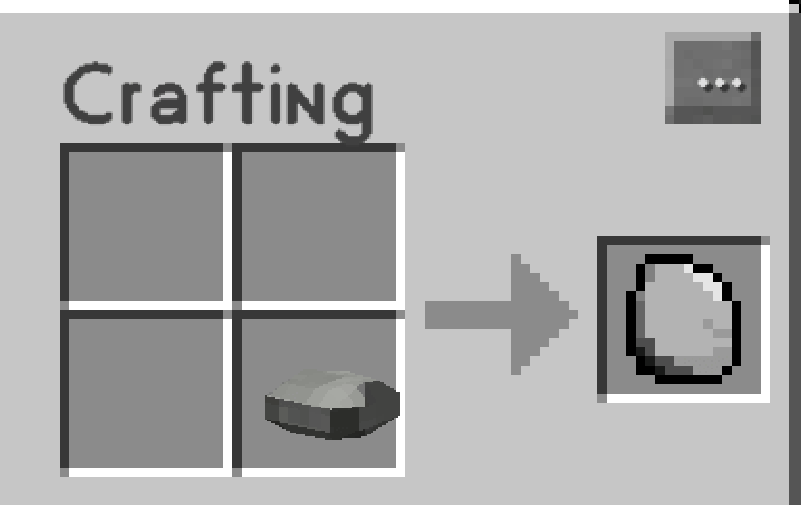 Once you have a decent amount of plant twine, use your inventory crafting slot to place 3 fibers to get plant twine. You can also place one of the rocks to get a crafting rock, which is used later. 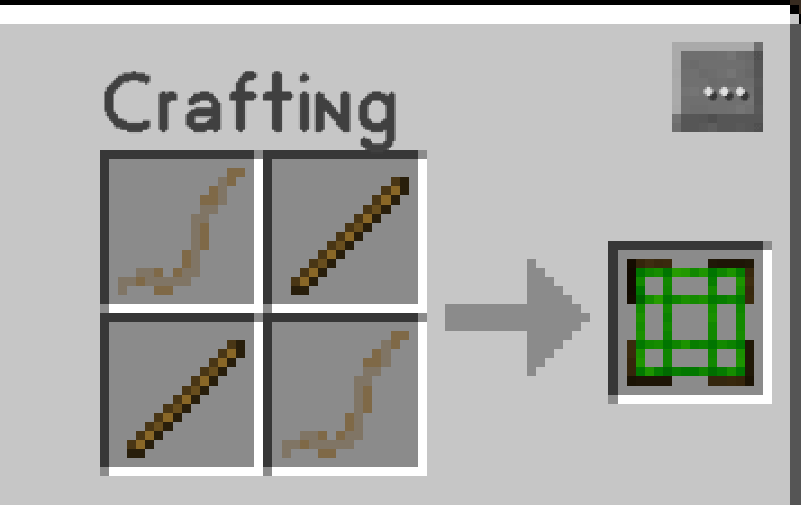 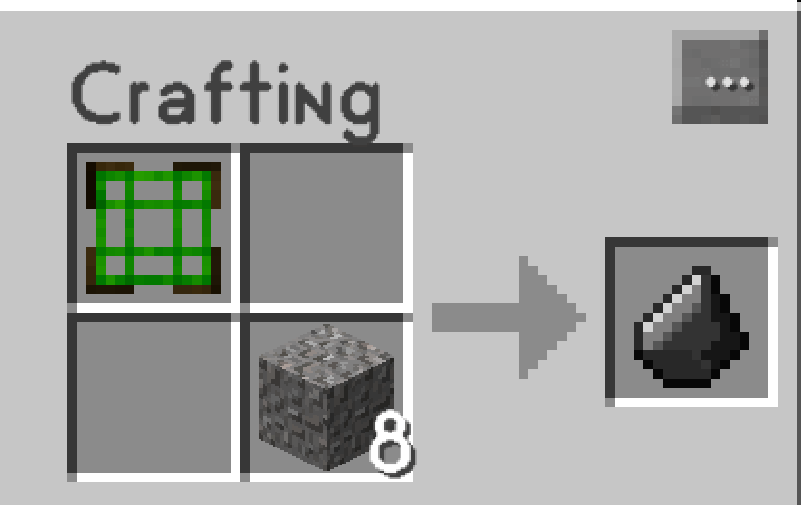 You can then use two sticks and two plant twine in order to craft a grass fiber mesh. This can be crafted with gravel to get flint, as it no longer drops normally. 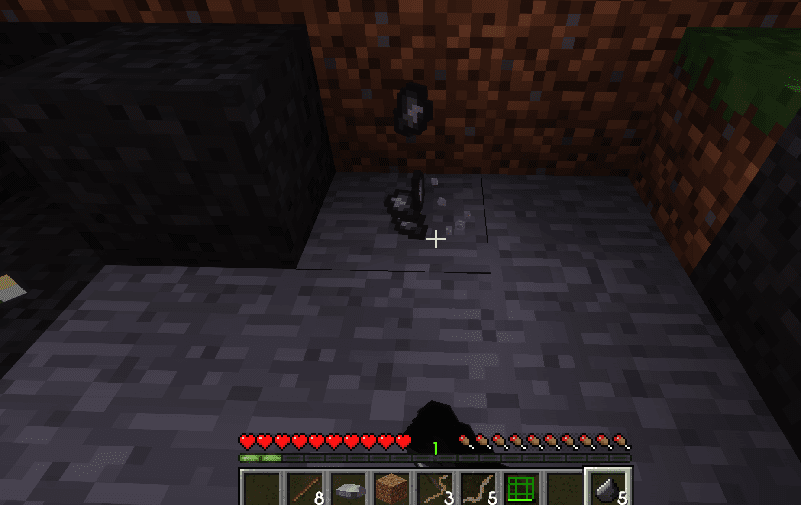 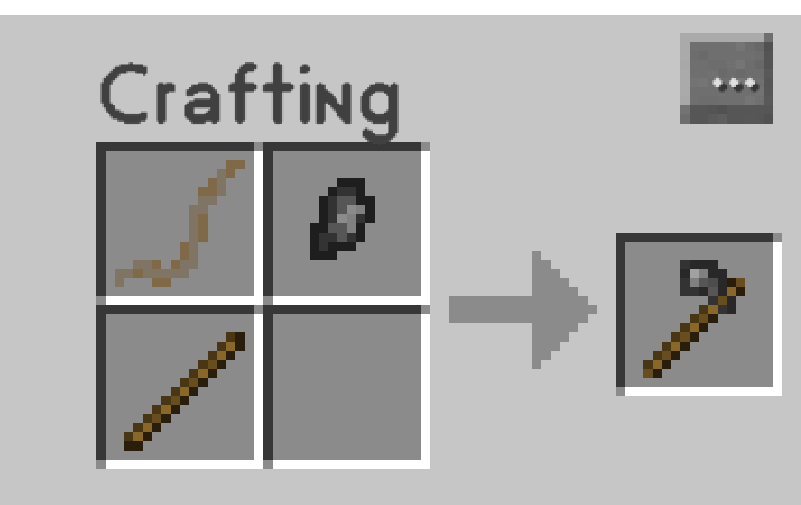 With the flaked flint, you can now craft it with a stick, and plant twine to create a flint hatchet. Finally, you can begin collecting wooden logs. 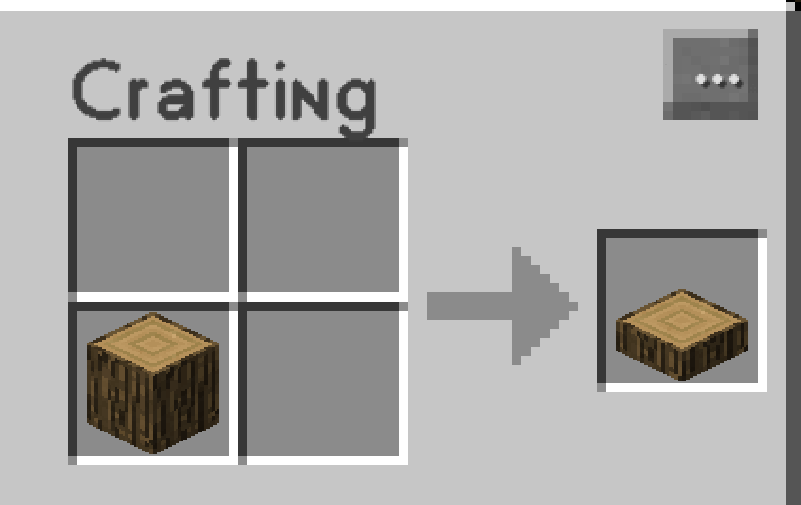 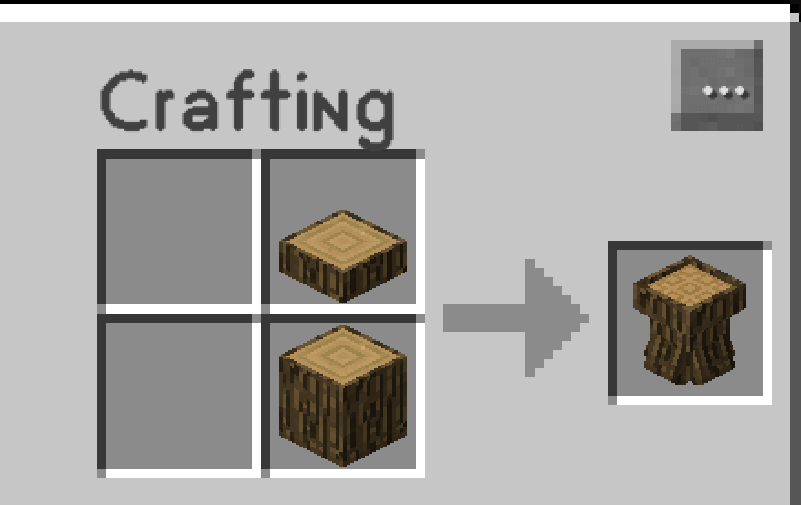 You can now place a wooden log into your crafting menu, which will yield a chopping block instead of planks. In order to receive planks, you will want to place the chopping block down, place the wood log on top, then repeatedly chop it with the hatchet. 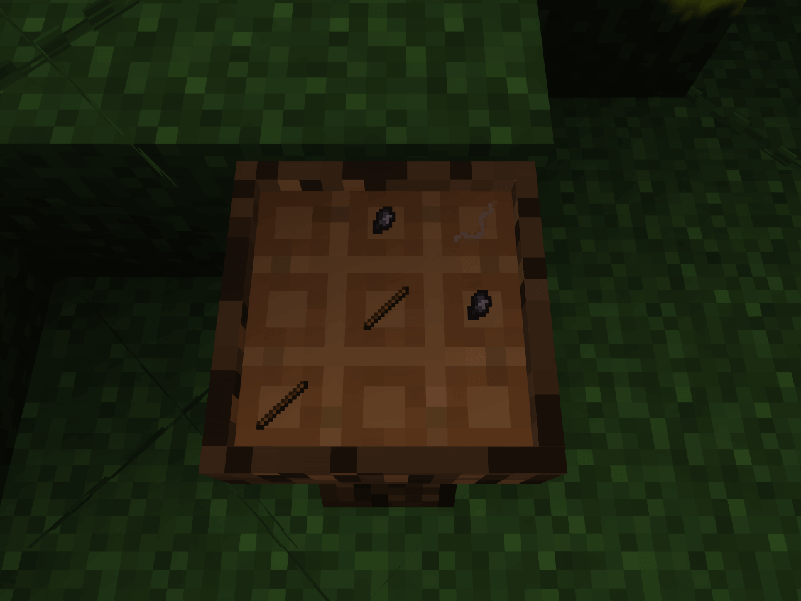 It’s time to finally start crafting! Using the chopping block above a wooden log to get the work stump. Place it down to get your pseudo crafting table.

In order to craft with this, you will need to manually place the items into the correct slots. Bring one of the crafting rocks from earlier, then hold right-click on the work stump with it to craft an item. In our case, we’ll want two sticks, two flaked flint, and a plant twine for a flint pickaxe.

Used to break leaves quickly, can also be used as a melee weapon. Created at the work stump with 2 flaked flint, 2 sticks, and a plant twine.

Part of the vanilla Minecraft tools, the modpack questline recommends creating this for use. The recipe is unchanged, with 2 sticks and 3 cobblestone.

The questline recommends creating this for later on. Similar to flaked flint, it is created by hitting bone off of solid stone.

The spear is a long-range throwing weapon, similar to a bone. It deals an extra 10 damage to mobs that are smaller than a block. This is made with 2 sticks and a flaked flint piece.

Another throwing weapon, the tomahawk can be thrown much faster when you have more than 1 on hand. This is made with 1 stick, 1 plant twine, 1 flaked flint, and 1 flaked flint point from earlier.

After all this time, it’s time to get some cooked food. The first block for cooking food is the fire pit. Once crafted and placed, you can right-click to add the food of your choice, then use a fuel such as coal.

Another cooking block is the grill, which requires an active fire underneath of it. This is more renewable, but requires fire sticks to light. These are crafted using two sticks and one needs to be placed in each hand and then right-clicked to start a fire.

Cooking with fire can be easier, but they are often not lit for long enough. However, it is possible to get an infinite source of fire early! To do this, we’ll first need to get some clay and cobblestone to make a kiln.

When the kiln is placed, you’ll want to place a wooden log within it, then light a fire beneath it. It may require a few flames before the kiln heats up and cooks the log, giving low grade charcoal. 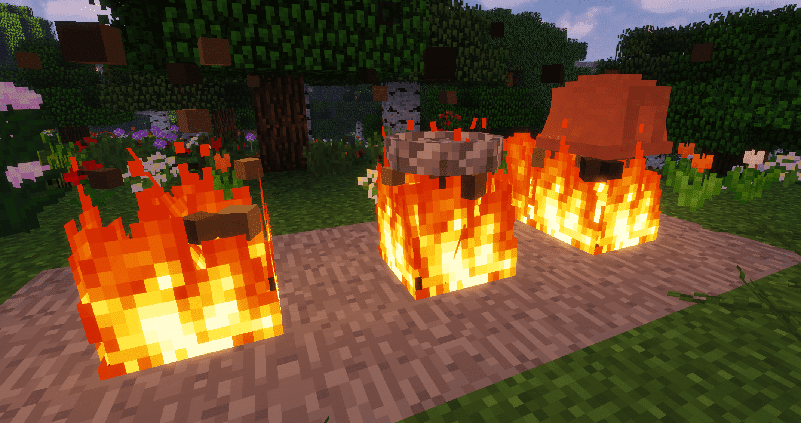 The low grade charcoal behaves like netherack in vanilla, keeping fire lit forever when ignited. This can be extremely helpful when combined with the grill, allowing for constant cooking with little effort. 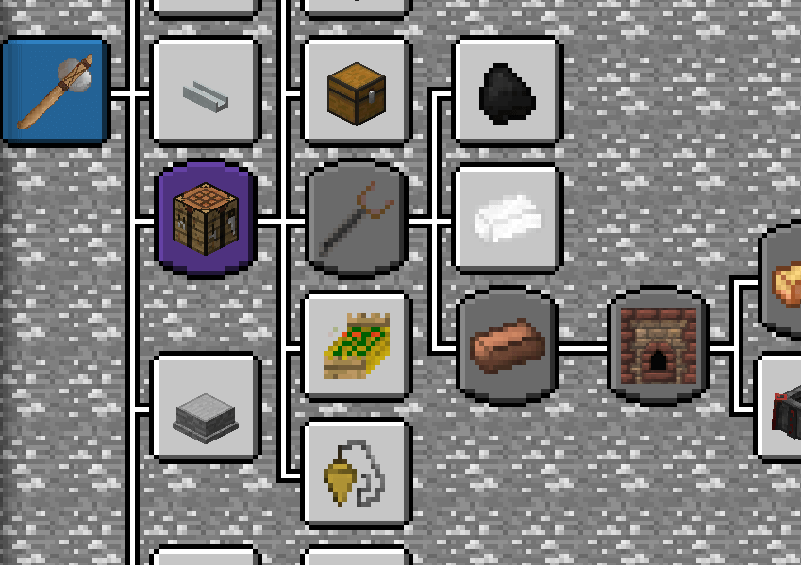 From here, there are many more advancements and ages to get through, but the menu found through “L” is a great guide for seeing where to go next. The dark-gray branch is the one that leads to the requirements for the next age. 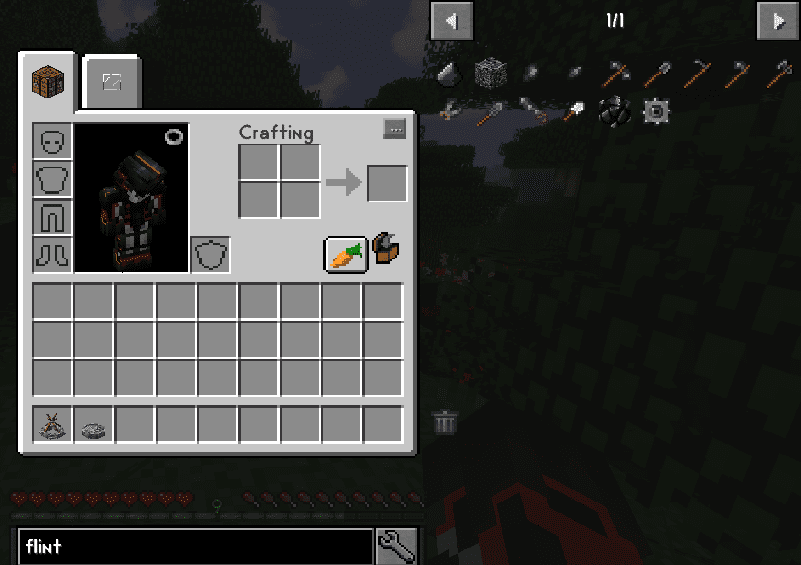 If you are ever confused on a crafting recipe, I highly recommend using the Not Enough Items menu found on the right-hand side of the inventory. You can use the search bar to find a recipe for any item in the game!

Overall, the SevTech: Ages modpack completely redefines how we see Minecraft. The gameplay that you knew previously becomes locked behind requirements, leading you to think about your progress and see where to go next. In addition, progress is based around individual players, meaning if a friend joins the server partway through, they won’t be left out of the starting process either.

Whether you’re looking for a challenge or are just wanting to try something new, we highly recommend playing with this modpack!

I get an error when joining the server:
Oftentimes, if a player is unable to join the server, it is because the modpack isn’t properly installed on your own computer. Ensure you are using the official SevTech: Ages modpack to have all of the proper mods installed to join the server.

My server is stuck loading:
This often happens when a mod is removed from an existing world. You can force the world to load by going to the server console and entering /fml confirm. With this pack, it depends on a new world to be used, make sure a new one was generated when selecting the pack.

Modded items aren’t spawning in the server:
If the mods appear in the creative menu but are not properly appearing on the server, it often means the server is not properly using the modpack. Ensure that the server was switched to SevTech: Ages through the panel and restarted to load it up.

How To Make a SevTech Ages Server With Apex Hosting