When playing through a vanilla Minecraft world, challenging the Ender Dragon is often the final test of your strength. Ever since that point, players often desire a way to tame and use their own dragons. While many mods and plugins have existed to achieve this, most are not as thorough as Ice and Fire: Dragons. As the name implies, this mod focuses on adding ferocious dragons in your world to slay or tame. In addition to this, the mod features many other structures, items, and mobs to keep you on your toes. From cyclopes to pixies, every corner of your world will have something new to experience. With Apex Hosting, installing mods is simple, so we have created this tutorial to help you get started.

Ice and Fire: Dragons features over 40.2 million downloads and spans from version 1.10.2 to 1.16.5 at the time of writing. The mod is owned by sbom_xela, authored by javaraptor, and has TheBv_ as a contributor. Whether you are a dragon hunter or tamer, Ice and Fire aims to bring a revolutionary experience for server owners and players alike.

Depending on the version of Ice and Fire, you will need different dependencies:

Download these mods like before and save them in the same location as the main mod, as they will be needed shortly.

Before proceeding with the installation steps, you will need to ensure the matching version of Forge has been installed on your game client.

Your client game will now load up the desired mods, allowing you to join your server and begin playing with the Ice and Fire: Dragons mod!

Once you load into the world, you can immediately begin to explore the new features added by the mod. Some of the most notable will likely be the various structures that can be found all over the world. 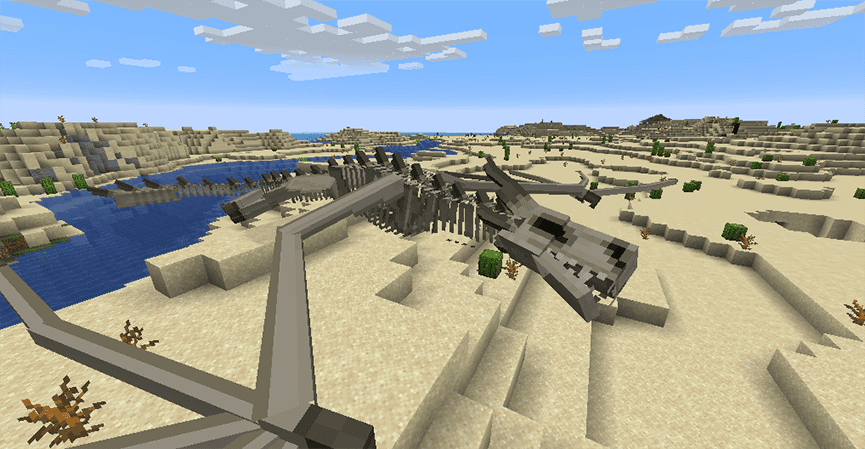 In deserts and cold biomes, you will likely find various dragon skeletons across the ground. These once-powerful creatures can be right-clicked with an empty hand to harvest the bone items directly. With this, you can craft different tools and weapons for use within the mod. 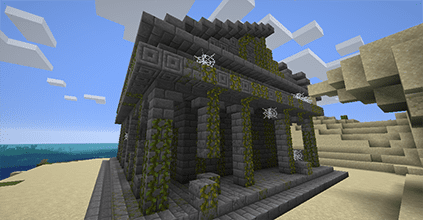 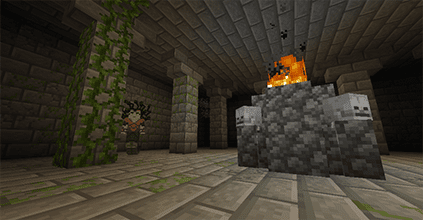 Find a strange stone structure with nothing in it? These broken temples are often found within beach biomes. By pulling a nearby lever, a stairway to the lower level will open, providing a chance to fight the Gorgon. 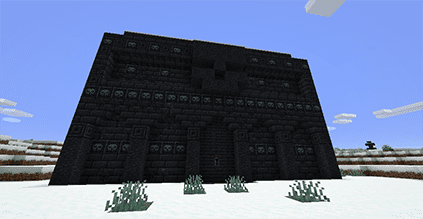 If exploring a cold biome, you may encounter a foreboding dark structure. These mausoleums can only be unlocked with a special key and provide a variety of items. 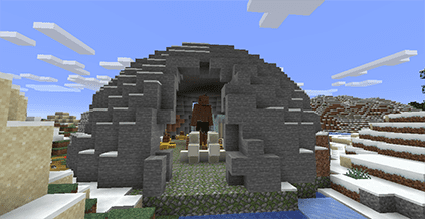 Found near beach biomes, the cyclops cove has gold, chests, sheep, and the cyclops itself. Be weary on approach, as the inhabitants are not friendly. 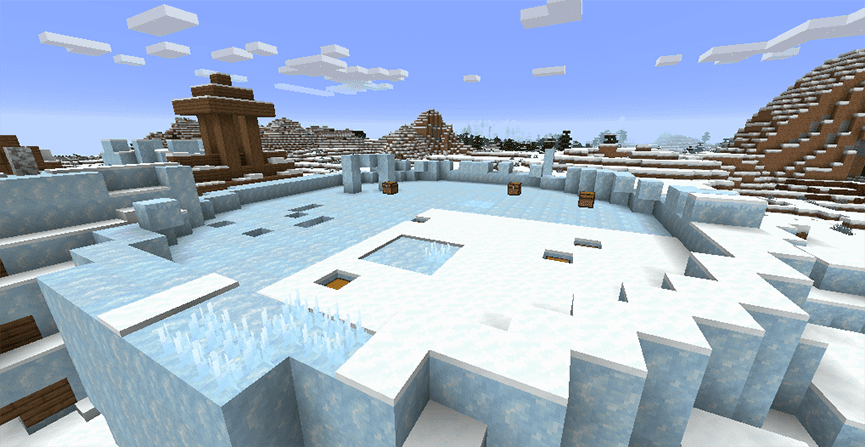 The dragon roosts can be found across every normal biome in the overworld. Often spawning multiple dragons, these areas tend to be very dangerous. Ice roosts are only found in colder biomes, while their fire counterpart is found in almost every other biome. While approaching is dangerous, the various gold and chests tend to balance it out.

There are many different mobs added throughout Ice and Fire, most of which are hostile. Some notable ones include: 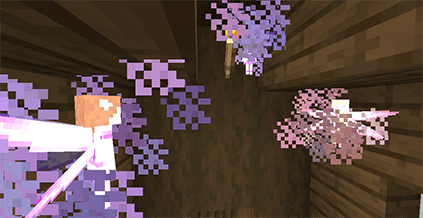 Primarily spawning in pixie villages, these small creatures are easy to spot with their glowing particle effects. While completely peaceful in nature, they will often try to steal items from you while you are looking away. They can be tamed by dropping cake nearby, allowing them to follow you around and give a status effect.

This neutral creature can be found in a variety of colors depending on which biome they are located in. While they will normally only attack when provoked, if they are hungry they will attack nearby mobs. They can be tamed by dropping rabbit feet, which will allow you to give them chests and a saddle. 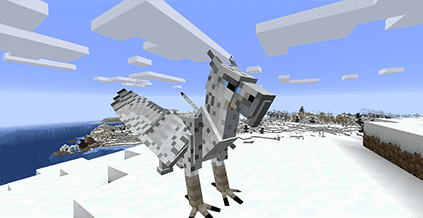 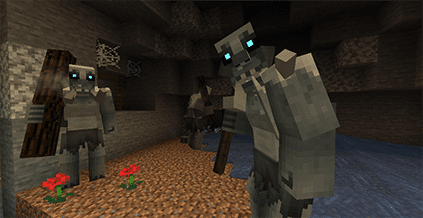 If you spot glowing eyes deep underground, chances are you’ve encountered a troll. Once spotted, the troll will unleash a roar and rush at the player, dealing massive damage. Their largest weakness is sunlight, which will turn them into stone. While very dangerous, the prospect of obtaining their weapon is very alluring.

The sea serpent is truly a terrifying foe, hostile to all who enter its aquatic territory. They will swim towards their prey to take a large bite or fire a jet of boiling water for distant targets. As if that wasn’t enough, they will leap out of the water and cause massive damage when landing. 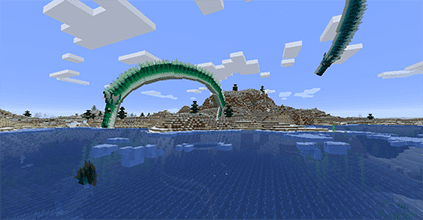 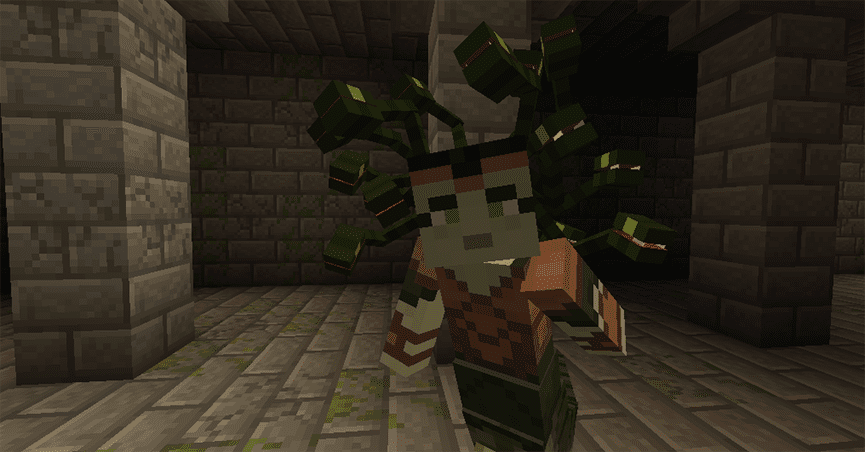 The Gorgon is a human-snake hybrid that lurks underneath the beach temples. Anything unfortunate enough to lock eyes with her will immediately be turned to stone, losing any armor in the process. This can be combated with a blindfold, but this will cause her to increase aggression and inflict damage and poison. Upon death, the Gorgon Head will drop, allowing you to petrify many other mobs. 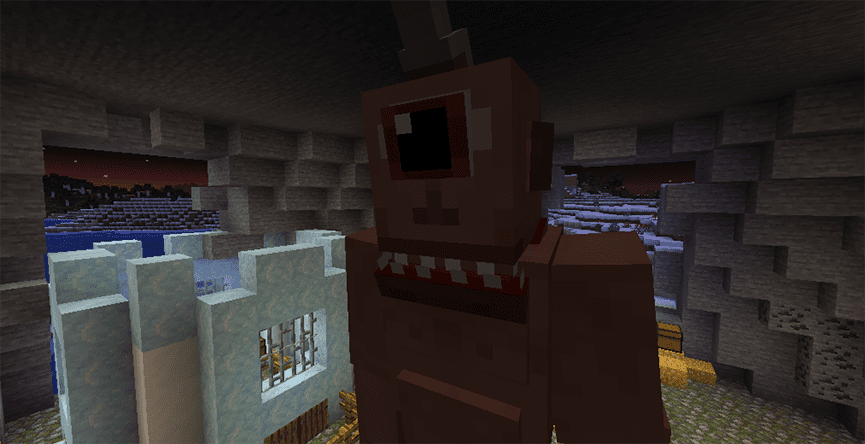 These gigantic monsters will spawn within cyclops coves, but can also be found wandering throughout the world. It will attack almost every mob that goes near it with a large roar. They will stomp, kick, and bite in order to inflict massive damage. To get close, players can use Sheep Disguise armor and sneak to close the gap. 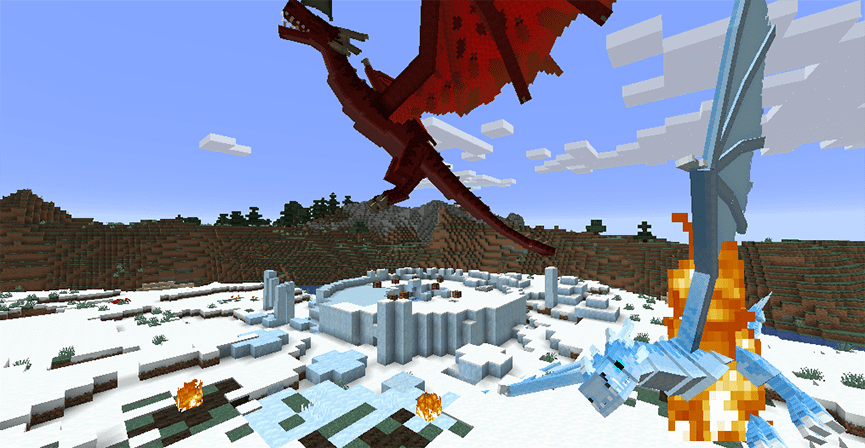 The main premise of the mod, the ice and fire dragons are a force to be reckoned with. Whether they soar through the air, use their elemental breath attacks, or simply bite, you’ll want to make sure you’re prepared. In addition to their hostility, dragons will gain increased health and strength as they develop larger. If you manage to obtain a dragon egg, you can hatch and tame one to wield their abilities for yourself.

I receive an error when starting my game:
Oftentimes, this issue will arise if there is an incorrect version or missing files. First, ensure you are running the correct version of Forge and the mods are the same version. If the issue still occurs, make sure the correct dependency has been installed alongside the mod. Once this has been completed, restart the game to try again.

I can’t join my modded server:
If you are receiving an error when trying to join your server, chances are that you are attempting to join without the mods active. To join a modded server, you must have the exact mods installed on your own game as well. If the files are fully installed, make sure you are launching your Forge profile or they will not load.