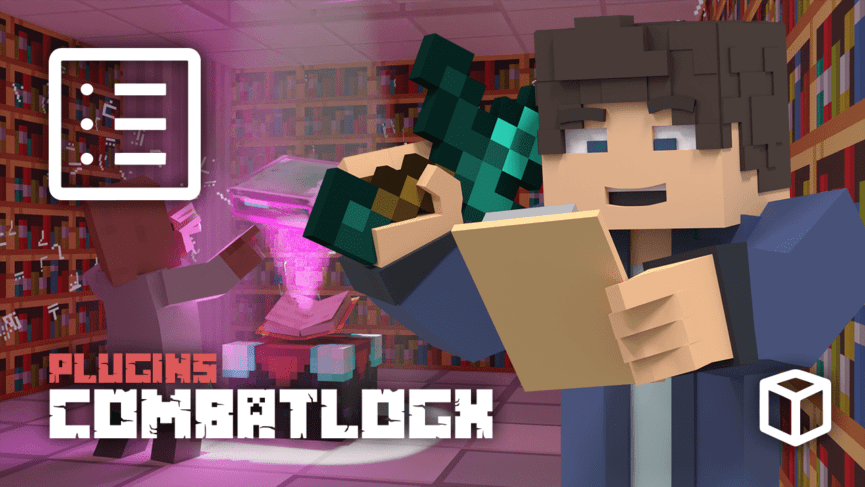 Hosting Minecraft servers by default has player combat, which is used in many different servers. Although, users can leave in the middle of combat and cause issues such as robbing the killer of loot. This, among other problems, makes fighting unfair and leads server owners to fix the situation. Solving this is done through CombatLogX, a Bukkit plugin, used to prevent players from leaving combat and other advantages. Using this on your Paper server will help your entire combat system by adding unique features, such as a combat timer to tell players they cannot leave until PvP is over. Other functions include when it’s safe to use commands, abilities, and even protects dropped loot. There are tons of other useful features that can help your server, which we’ll be reviewing later to get you started. In the meantime, let’s explore the CombatLogX plugin and how to install it on your Minecraft server in this Apex Hosting tutorial.

The CombatLogX plugin was originally developed in 2016 by SirBlobman, on Spigot. Over time, it collected over 210k+ downloads and helped create quality PvP servers. This is especially true since the plugin supports Minecraft 1.8.8 to 1.19.2, meaning that it can be used before the 1.9 combat update. The overall function is to prevent players from leaving combat, but there are tons of other possible features you may explore. These are mainly controlled through CombatLogX’s configuration, as they are settings. However, expansions allow for even more control such as boss bars, cheat blocking, death effects, and more. By default, server owners have immediate access to all features. With this in mind, let’s learn about the plugin’s installation and its features to use in-game.

Now that the plugin is installed on your Minecraft server, it’s time to review CombatLogX features to get you started. These will be an overview of what to expect and potential changes you can implement. As for a detailed description of everything, review their wiki here. However, it should be noted that almost all features are controlled in their respective config files. Whether this be changing combat timers or creating battle rewards, these are backend server settings rather than commands. Luckily, our easy-to-use panel editor makes tweaking all plugin aspects a smooth process. Considering all of this, check the sections below to better understand CombatLogX features. 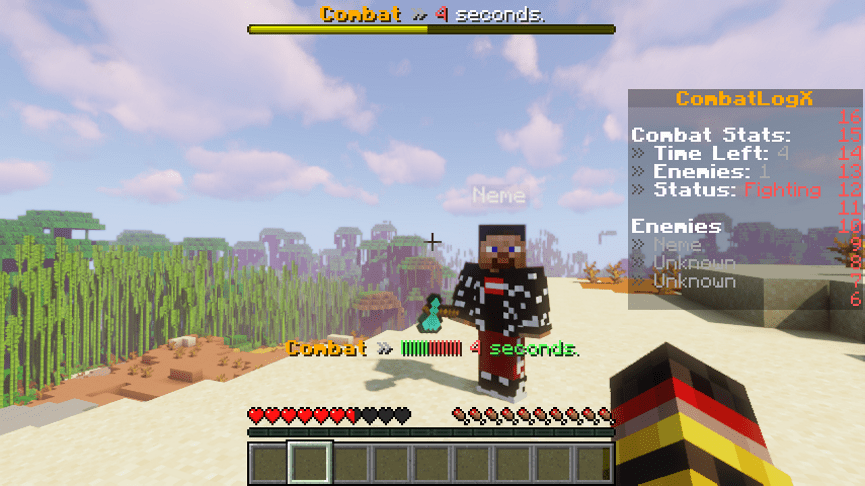 As the plugin’s name suggests, the main functionality is preventing players from leaving combat. This is to ensure a fair battle between users, as the loot is their reward and becomes unfair when someone quits mid-fight. By default, this is enabled with a few other configurable features that may help your server. The normal amount of time preventing players from logging out is ten seconds, and would punish the players by dropping all their items if they leave before that. Although, as previously mentioned, you can customize everything in this plugin to suit your needs.

CombatLogX is installed with expansions, which are enabled by default to provide more content on your server. These can range from player combat glow to the status scoreboard. Due to the large amount of expansions, we won’t be able to review them all. However, we’ll go over popular ones that can help your server’s battle system and how to access their files.

Upon killing a player or specific mob, automatic commands are executed to give the player a diamond or another item if you configured that. There are mob whitelists and world lists to allow this functionality, all found in the expansion’s file. Server owners can set up multiple rewards for certain situations, making an almost endless amount of possibilities. They can also make it a chance-based system to make it a rare occurrence or an everyday feature. Rewards could be created to punish players too, meaning you take away in-game money after killing a villager or another blacklisted mob. This expansion works best on survival, skyblock, and other similar servers.

This expansion is a simplistic, yet important one for your players. After a battle, the victor cannot pick up loot for 30 seconds by default, but has other features. For example, if a player dies in the void then loot protection will return their items to the killer’s inventory. Another instance is if a player logs out mid-combat, thereby protecting their gear for a short time. These functions are configurable, meaning you may toggle or customize its settings.

If your server has a lot of combat, then protecting new players might be best. When someone joins, they cannot be attacked for thirty seconds, but can be by mobs. However, by default the protection is removed if the new player attacks first. This expansion also controls PvP toggling through the /togglepvp command, giving everyone a chance to prevent combat for the specified amount of time. Using this feature on your server could be great for factions, hardcore, and other types due to possible PvP traps or active arenas.

Just like other plugins, CombatLogX has permission nodes for players to access abilities or commands. Make sure you’re using a plugin, such as LuckPerms, to manage these permissions on your server so players can use its features. Otherwise, you may become the server operator to use all commands. Down below is the full list of plugin commands and their permissions to use on your server.

The main features are controlled in CombatLogX’s configuration file, which allows owners to disable broadcast messages, define ignored projectiles to trigger combat, set the timer amount, among other fighting-related settings. There are other files you may review and alter, but our focus is on the main functionality. Follow the steps below to access the file and how to apply the changes.

Plugin Isn’t Working
Confirm if the plugin is enabled or not properly installed by using the /plugins command in-chat. This will display a list of all active plugins, but those that appear red or missing are inactive ones. If this happens to CombatLogX, then double-check you’ve installed it on the correct server profile and in the right FTP directory. Otherwise, ensure your server can support plugins and is using Minecraft 1.8.8 to 1.19 or higher versions. Once the issue is detected, proceed to make the necessary corrections and restart the server.

Inability to Use Commands
If the plugin is working, but you and others cannot use commands, then the problem could be a permission node issue. This happens when a default user attempts to use an unauthorized command, as they don’t have access due the default permissions. Install LuckPerms or another similar management plugin to start setting up the types of access for players/ranks. Alternatively, this entire scenario could be a result of a broken plugin version. If CombatLogX is enabled, permissions aren’t an issue, then try a different version on their Spigot History page.

Unable to Disable Features
In cases where a feature or ability isn’t suited for your server, disabling it requires either a command or setting change depending on its type. For example, if you want to remove the scoreboard from being combat tagged, then use the /clx toggle scoreboard command. For other ones, they should have a toggle option in their respective configuration file, even if it’s an expansion. An example would be setting the “enabled” option to “false” for a feature. Alternatively, you can completely delete the expansion JAR file in the FTP panel (then restart the server) to remove it. In some cases, permission nodes are used to control if players can use it or not, so keep this in mind as you attempt to disable a function.