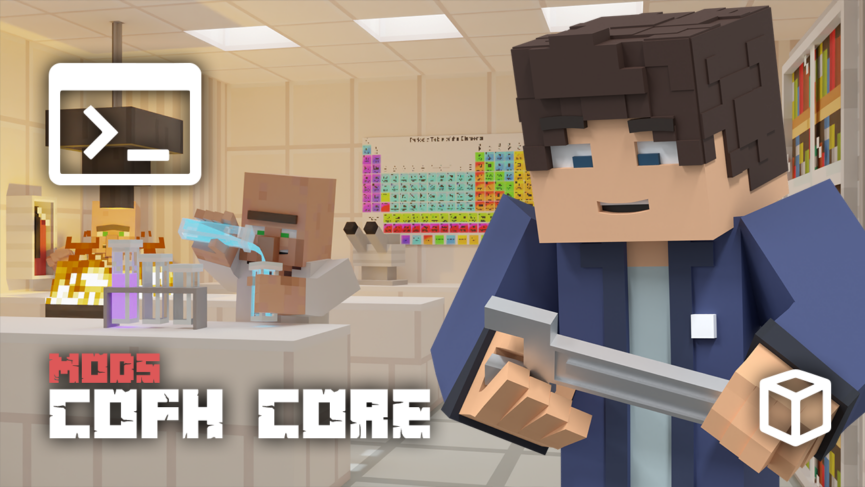 When playing on your Minecraft Forge server, you or other players may have difficulty accessing ender chests or crafting tables in certain scenarios. When this situation arises, server owners may want to remotely access these features among other things. This is resolved by CoFH Core, a Minecraft mod that provides essential commands and functions to improve your gameplay experience. Additionally, the mod is a foundation for CoFH addons to give you more control over the world and items. The mod works out-of-the-box, however a variety of configurations are available to tweak the permissions and other features. In this Apex Hosting guide, we’ll showcase the CoFH Core mod to get you started on your Forge server.

The CoFH Core mod is required for the launcher and server to function properly.

Make sure to have the mod downloaded onto your computer before following the server installation instructions.

CoFH Core has been around since 2013 and collected over 105 million downloads on CurseForge. This supports Minecraft Forge 1.6.4 to 1.18.2 versions, which means most servers can run it without problems. It’s the main modification for other CoFH mods provided by the CoFH Team, but that means there aren’t too many features for it. However, it does come with some handy functions that you or your players can utilize.

The main focus for CoFH Core are the commands, which offer quality enhancing features for your server. You can do things like /cofh crafting to immediately open the GUI to craft items or use /cofh enderchest to open your ender chest without having the block. Down below is the 1.18.2 command list for you to review. Although, it should be noted that if you use other versions of CoFH Core, then the commands change. You can find information about other commands or functions from different versions at CoFH’s Official Wiki.

There are minor settings for you to review and edit if you want, such as permission levels to the commands. You can access the main configuration file in your world’s serverconfig folder from the FTP panel. The file’s name is cofh_core-server.toml, which you may review by pressing Edit to the far right of it. It’ll display fishing, world, command, and other settings that are controlled by specific numeric values. For example, the “Fishing Exhaustion Amount” option is controlled by a range of 0.0 to 10.0 exhaustion. Another example would be the “EnderChest Permission Level” setting, which is using the server operator’s level for the value so they can use the command.

There are many addons for CoFH Core, but mainly are for Minecraft 1.12.2 and not higher versions of the game. You can review them to possibly implement into your server down below.

CoFH World – Control the world and ore generation, among other things.
CoFH: Vanilla+ Satchels – Adds satchels to the game to carry extra items.
CoFH: Vanilla+ Tools – Adds extra tools to have more weapon options in-game.
CoFH Lib – A required mod for specific functions that is meant to be a backend modification.
CoFHTweaks – Visual and client-sided options to help with performance.

CoFH Core is a great tool to manage minor features in your server and allows for convenient commands, such as the crafting command or fishing exhaustion option. Although, it’s mainly used for its addons since the mod is a requirement for them. Unfortunately the modification changes vastly with every major update, so there are some features in the previous versions compared to the latest one. Regardless of that, the CoFH Core mod will help make yourself better due to its functionality. We hoped this resource assisted you with installing and using the mod on your Forge server.