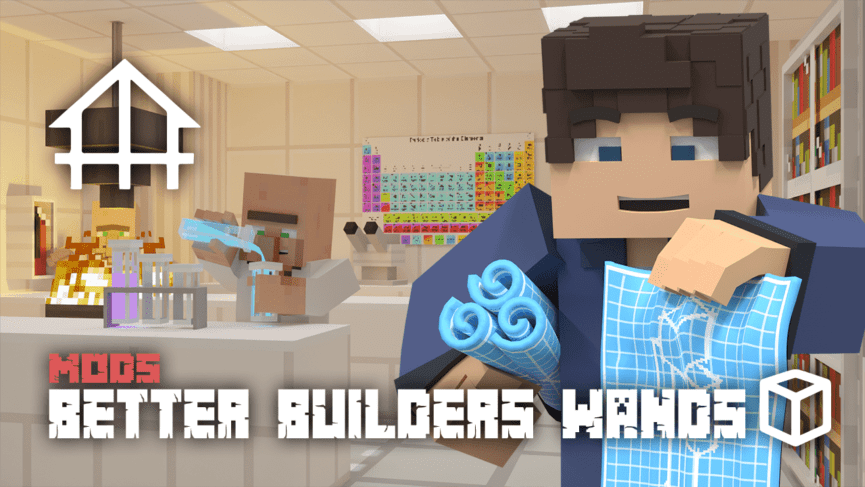 While creating your magnificent castle or mansion in Minecraft, it can become tiresome to continuously place blocks. This may lead some players to find an easier building method, as spending too much time on it can be irritating. Instead of using cheats or creative mode to quicken the process, Better Builder’s Wands, a Forge mod, can help you and other players build. This modification gives the ability to change building modes with special craftable items, which will instantly format block placements to your design. It’s handy for large structures that can take hours to complete in survival mode, thereby saving you time due to the mod’s features. In this Apex Hosting guide, you’ll learn how to install and use the Better Builder’s Wands mod on your Minecraft Forge server.

The Better Builder’s Wands mod was published by Portablejim in 2015 and gathered over 70 million downloads on CurseForge. It’s only for Forge 1.7.10 to 1.12.2, which does limit the type of required server. When you enter the game, you’ll notice the gameplay isn’t impacted too much since the mod only adds four items. These are called wands, which help you build by making it easier and faster to place a large amount of blocks. Creating huge structures can be challenging in survival mode, but with this mod the process is a lot smoother. We’ll get you started by reviewing its installation and showcasing the features from it.

This mod requires to be installed on both the server and launcher, as this ensures compatibility.

As previously mentioned, there are four items added to the game with the Better Builder’s Wands mod. These are wands, which help players build any type of structure via its several different modes. This allows for specific building patterns and the amount of blocks to place in it. Each type of wand has limitations, such as a singular mode or multiple. The stronger material used for creating the item determines its features. For example, a diamond wand would have almost all abilities rather than a stone-made variant. This gives survival players many options to choose from and the exact type needed for their structures. We’ll show off the different wands and their modes down below to give you a better understanding of the mod.

Before discussing builder wands, we’ll have to cover their specific modes. Accessing these features requires pressing M on your keyboard while holding the tool. You’ll see a chat message confirming the mode and a brief description of what it does. This is important, as the modes determine the building direction and thereby changing how you may build. There are seven unique features, with some being similar yet different.

This mode only extends left to right from the original block, with no top or bottom placement. Basically, players can place blocks on all sides and cannot do it on its up or down side. The Horizontal mode is good for laying foundations, building bridges, or other activities involving this direction.

Similar to the Horizontal mode, this one extends up and down from the original block and has no top or bottom side placement. This is excellent for placing walls or building pillars, among other structures with this direction.

The North-South mode places blocks on north and south coordinates of your world. Essentially, this means that you can only use it while facing the specified direction for all applicable sides. This is good for specific structures that are mainly looking north and south.

The same feature from North-South applies, but is now instead east and west. Only buildings facing these directions in your world can be improved upon from this mode. There isn’t anything too special regarding this particular mode, as it’s too similar compared to its counterpart.

Unlike the normal North-South mode, this variant allows you to build upwards in addition to its normal function. Building while using North-South (+ Vertical) allows for more flexibility with structures facing this direction.

The same features from North-South (+ Vertical) apply to the East-West version, but in their respective direction. Creations facing east and west coordinates in your world can be improved with this mode.

The No Lock mode allows players to build in all directions from the original block. This is by far the best type to build with, as it can instantly place foundations, walls, and so on. Although, since it goes in all directions the wireframe display can become overwhelming.

Now onto the tools needed to build and use modes, wands. These range from stone to a nether star variant, which determine certain features. The stronger a tool’s material is, the more abilities you and other players can have in-game. As for crafting them, they are similar to shovel recipes, as you’ll need two sticks and the main material for it. However, instead of placing the sticks vertically they need to be diagonal. Once the item is created, hold it right-click to start building with its modes. Remember, these wands use blocks from your inventory so make sure you have enough resources.

This is the lowest level for a wand, as it’s made from stone and can only place 5 blocks at a time. Additionally, it’s limited to only the horizontal mode and has a lifespan of 130 blocks. It’s by far the most attainable wand to use, but isn’t too effective when compared to others.

The second best wand for building is iron, since it allows a little more flexibility. This tool grants players the ability to place 9 blocks at once in both vertical and horizontal modes. Its lifespan holds up to 250 blocks, which is almost doubled from the stone variant.

Almost the best wand, the diamond version provides players with 1562 instant block placements. It also carries the same number for its lifetime, which means better building for your structures. Additionally, this inherits previous features with the north-south and east-west modes.

Now for the absolute best, the unbreaking wand. This allows you to place a full inventory of blocks at once in all modes. It also has no lifespan, meaning the tool’s duration is infinite. Due to having all features, building is easiest with this wand. It’s almost as if you combined the WorldEdit mod and creative, which could be seen as overpowered.

Building in survival mode is a lot easier with the Better Builder’s Wands mod, hence its name. Players in your Minecraft world can craft wands and change modes to create the perfect base. This can be combined with other mods to make a wonderful modded experience, or to add a vanilla-friendly feature to the game. All recipes and features don’t require permissions, which makes managing it easier for your server. While using the mod, make sure you don’t spam build with a wand since that can pose issues. For instance, spamming the No Lock mode can drain your inventory and ruin builds. In any case, we hope this guide helped you install and use the Better Builder’s Wands mod on your Minecraft Forge server.