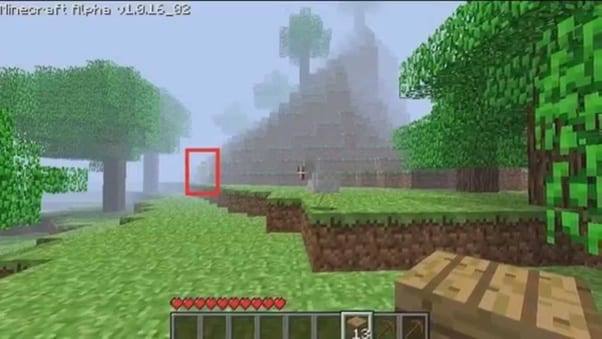 What is Herobrine? Is he the great calamity which is foretold by the horror from days of old, or is it just a tall tale told by the mischievous? Well, the story is much simpler than that. TL;DR -Herobrine is the most popular creepypasta surrounding Minecraft. However, if you would like to learn more, let’s continue on.

Herobrine was a creepypasta first originating around 2010. The basics of the story are that someone started up a single-player world, only to sometimes notice a steve-like figure in the distance, but with washed out eyes. Whenever the player spotted him, the figure would run away. He would see no name pop-up over his head, and ensured he wasn’t in multiplayer mode. The player then proceeded to find structures and generations that were deemed abnormal or playermade. Examples included 2×2 tunnels, sand pyramids in the ocean, and even trees with all the leaves gone. All of these were attributed to this figure.

The user went on to post on forums asking if anyone had encountered similar situations in their world, to which the posts were deleted within minutes. After multiple attempts, the anonymous user was private messaged from the user named ‘Herobrine’ which said “Stop.” Going to Herobrine’s profile would lead to a 404 error.

The user then got in contact with a few other community members who all corroborated their stories. A month or so passed while research was conducted on Herobrine. It turns out, the name was frequently used by a Swedish gamer. After some more information gathering, it was discovered that this was the brother of the head developer of Minecraft, Notch. The writer went on to say he personally emailed Notch about if he had a brother or not, to which he replied “I did, but he is no longer with us.”

Ever since then, Herobrine has not been sighted on record.

So, now you know the whole story, but is it really true? Of course not! This is a pretty well written, spooky tale with somewhat absurd concepts. Notch, or Markus, never had a brother in real life. There is no shadowy figure that looms in the corners of your survival worlds, but it still is quite entertaining to read. After this, internet culture was riddled with rumors of Herobrine’s existence. Youtube, reddit, even the official Minecraft forums were obsessed with finding this potential ghost. Mojang even got in on the joke by adding “-Removed Herobrine” at the end of every changelog.

One of the biggest factors that really carried Herobrine’s popularity to the highest it had ever been was the Brocraft streamer “Copeland” who did some really crazy stuff. Basically, he would stream his Minecraft Let’s Play for weeks on end. In one episode, however, around twenty minutes into the playthrough, he entered his house only to discover a fairly poorly made reskin of the painting texture that looked like Herobrine. He also placed a Herobrine playermodel in a screenshot of his house, to make it look as if Herobrine himself had somehow snuck his way into the frame. Now, this isn’t evil and I’m sure Copeland was not malicious when doing any of this. It was all for fun, and him acting scared to death was all part of the mythos that was being spread around the community at the time. Looking back, small instances like that leave memories for us. Herobrine has left his mark on Minecraft, and he’s left a lot of fun moments through memes and stories that keep us up at night. With that said, this part of Minecraft is an amazing part of history, and now you know a little more about how it came to be.