Modded Minecraft is extremely popular, to the point that dozens of millions of players will all gather to craft amazing modpacks that they can share with the rest of the community. Sadly, with a big community that has no official support, community-based hubs are vulnerable to many different dangers just as anything is on the internet. Cybersecurity is crucial when it comes to gaming, and so the Minecraft community needs hubs that they can trust. Today, we’re going to go over one of the most popular websites that are regarded as such, CurseForge.

To put it simply, CurseForge is the largest and safest repository for modded Minecraft, featuring thousands of mods, texture packs, and worlds. Since 2015, Modpack support has been added to the website, making it easier than ever to create and share modpacks with others. 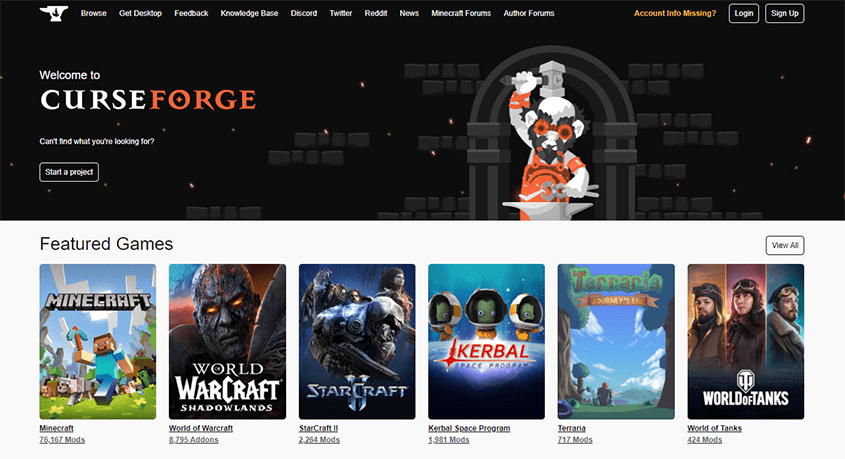 CurseForge prides itself on its safety. Unlike other sites, there is no adware. All downloads are hosted on the site itself. To be clear, however, some mod authors use sketchy download links, like any community-based website. At the end of the day, even the safest option still requires some effort on the user’s side to maintain their own security.

There are two main ways to play modded Minecraft using CurseForge. One method you can use is to download mods or modpacks on the official site and then placing them into your client on your own. The other, is to use a third-party launcher that automatically installs them in the form of a user-friendly UI. You can check out our official all-inclusive guide on how to install mods for more information.

Since ye olden times, CurseForge has since expanded into much more than modded Minecraft, but we will focus on Minecraft per our namesake. Now that CurseForge is officially under new ownership, they have a brand new launcher that can be used to manage your modpacks, mods, and much more conveniently.

The CurseForge Launcher utilizes a sleek and simple design that enables the easiest modding for Minecraft to date. It is the optimal way to play modded Minecraft by ensuring similar files for all players involved for the foreseeable future.

How to install the CurseForge Launcher

As CurseForge is passed from company to company expanding on its features and robust software, it is the closest thing to official that we have. Unlike Bedrock Edition, Java Edition has no structure or support system in regards to mods. The benefit of this is that everything is free. The downside is that it is a free for all, where the community is assigned the task of organizing itself. To be fair, though, they’ve done a very good job at that. Arguably a better job than Microsoft themselves. With that said, I hope you learned something new, and have a great day!