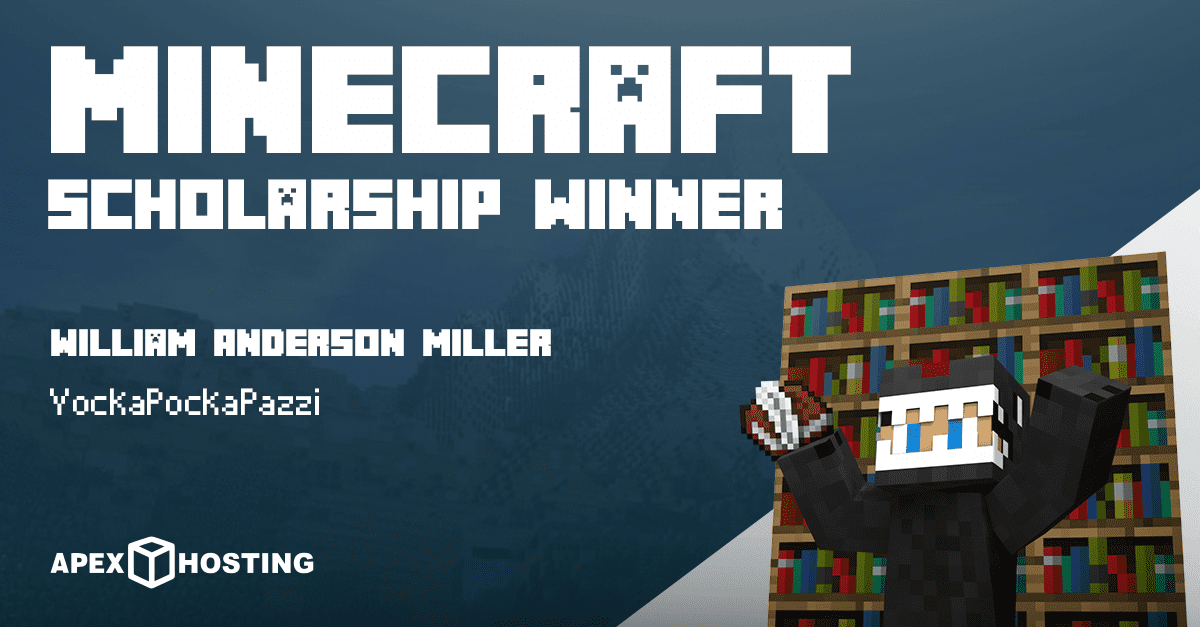 We’ve read all of your essays and took our time delicately selecting this year’s essay winner. This has been easily our most epic scholarship giveaway ever with the most amount of entries ever clearing almost 9,000 entries! However, we could only pick one and this person has done amazing things for the community and used Minecraft as a tool to help build his career into entrepreneurship. Congratulations to William Anderson Miller aka YockaPockaPazzi! Check out his amazing essay below:

I have been avidly playing Minecraft since version 1.2.5 and am thankful it has been a consistent source of entertainment and learning while I attended middle school and high school. Throughout this time, I have experienced much of what Minecraft can offer to young entrepreneurs and professionals. I feel strongly about Minecraft’s positive effects and what It can achieve in student’s education and career development because of how much it has taught me and shaped my future.

Shortly after stumbling upon Minecraft I experienced my fair share of laughs with friends on the then most popular game mode, factions. Eventually they got bored so I moved on and began playing on smaller servers. It was on one of these servers that I truly began to learn the hidden lessons of Minecraft, server administration.

Over the course of about a year I worked my way through the staff ladder learning valuable skills along the way with each rank I earned. Helper taught me the basics of in-game interaction and forum moderation. Through massive dedication and loyalty, I eventually was promoted to moderator. While moderator I was allowed to overhaul the forums, and became the first responder to many people’s questions, reports, and appeals. Over this time, I learned many skills applicable to a customer service representative and have been able to apply those to other local jobs I’ve held. Around this time, I also started practicing spawn designing and editing. Besides the obvious art skills to be learned I was able to learn how to market myself and make it a profitable venture after networking with others. I found building to be a good way to stay involved with and contribute to many communities. I have even had a search and destroy build enter the map rotation on a server that eventually merged with Mineplex. Currently I’m doing more large-scale builds with my latest project being a spawn for a skyblock server.

After about two years of service to the server I staffed on I became an admin and eventually the head administrator once things really started taking off. In the beginning though we were still fairly small averaging around 50 at all times; this allowed me to gradually learn many facets of how some of the old industry operated. I learned PermissionsEx and started manipulating other plugins configs for the server as well. (I never was much of a coder or developer but so many others have found success through their amazing talents. Many of which contain basic concepts that can be thought to young students as well.) Once we thought we had a quality product and enough saved capital we started exploring marketing and were able to keep up with it. I became familiar with many marketing tools and we began putting money towards advertisements and hiring out content creators to make videos on our server, a practice that wasn’t as common back then. These methods can easily be compared to more mainstream industries using billboards or celebrity endorsements to gain business and are usable methods for anyone entering the field of business.

With a player base gained we started peaking at around 300 and had a steady flow of donations to continue expanding. We hired staff and started tapping other markets by expanding into prison and skyblock. After much growth, I quickly was taught the dangers of back handed business. I’ve experienced people world downloading our builds, using spam bots, domain hijacking, and even attempting a hostile takeover/buyout. These things are set backs, but they have made me a stronger business professional and I am thankful to have learned these lessons sooner rather than later.

From marketing to administration Minecraft has taught me the applicable skills needed to succeed in many careers. I feel confident that its’ implication has set me on the path for a bright future where I can put all my knowledge to work. These experiences have pushed me to explore jobs I otherwise would not of thought of. I plan to attend Texas A&M University for a degree in administration, an option I would not have considered if it wasn’t for my history with industries surrounding Minecraft. Minecraft has been so much of a positive influence on my education and career development that I am confident that it can be used as a tool for others as well.

An amazing job by William and thank you all for your wonderful entries. We laughed, cried and smiled to all the amazing essays you wrote and are extremely excited for everyone to bring their best for our Fifth Annual Minecraft Scholarship!