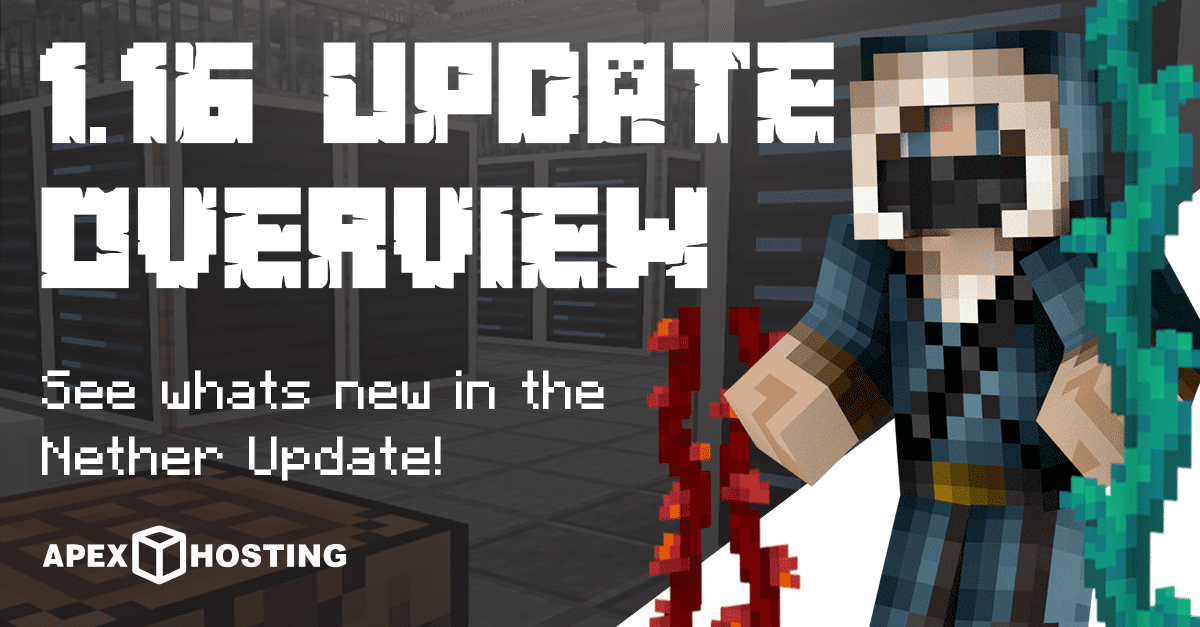 will be a complete collection for the newest 1.16 Nether Update. It will cover all major biomes, mobs, blocks and functionality changes that have been added. There are some miniscule details that will be left out if they are deemed negligible in regards to gameplay, like now having the ability to eat food in creative mode. We’re all excited to jump into the update so we can explore all the new biomes and find all those new mobs, but it’s best to have some knowledge beforehand to understand what you’re getting into.

With all of that said, let’s enter the Nether. 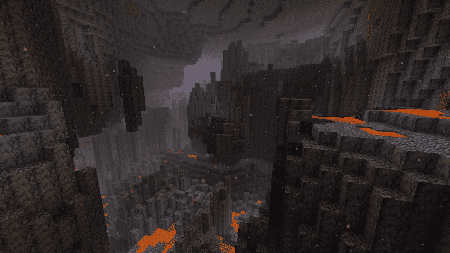 pillars of basalt that are thrust from the ground all the way to the ceiling of the Nether. This biome changes the very color of the air to a gray hue, almost like ash. Here, you can find blackstone pockets. Ghasts, magma cubes, and striders may spawn here. 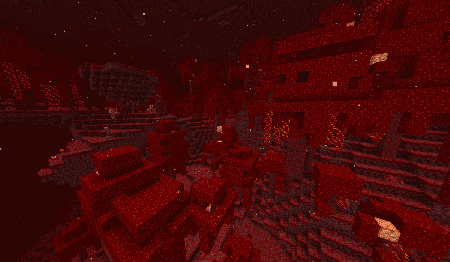 A dense, red forest filled with crimson fungi and nether wart. Weeping vines descend from the trees. These fungal trees can produce wooden tools like Overworld trees, but the ‘fungus’ is fireproof. The air is similar to the Nether Wastelands. Zombified Piglins, Piglins, and Hoglins may spawn here. 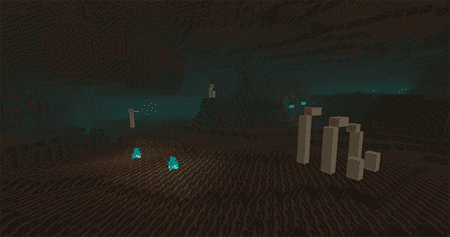 soul-riddled tundra. Skeleton, Ghast, and Enderman spawn rates are increased here. Huge fossils spawn atop the ground, while blue fire cakes the soil. The air is accompanied with a blue hue, to match the Soul Fire. 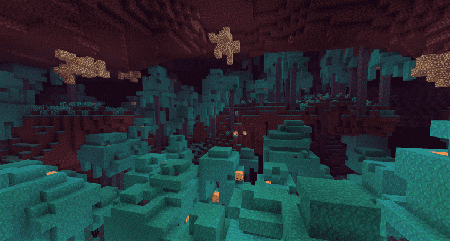 A blue color variation of the crimson forest, but with somewhat different vegetation and blue particles and fog effects. The fungal trees can produce wooden tools like Overworld trees, but the ‘fungus’ is fireproof. Enderman and Striders may spawn here.

The classic netherrack wasteland we’ve grown to know and love since the beginning. Unchanged and unedited, but renamed. 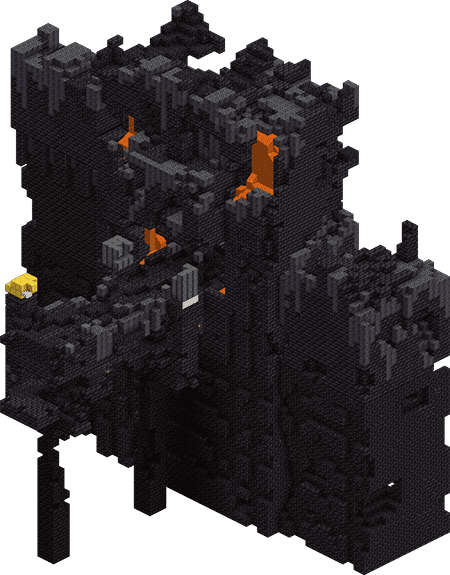 Huge bastions made of blackstone that house a small army of Piglins. If you break their blocks, or open their chests they will attack with no remorse. There are four types of generations in the Bastion. Bridge, Hoglin Stable, Housing Units, and Treasure Room. Piglins that spawn here tend to have armor, and this is the only place known to house the ‘Pigstep’ disc. Magma Cube spawners can also be found here. 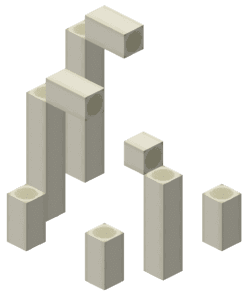 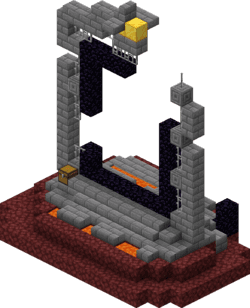 Shattered remains of Nether Portals. They can be found in both the Overworld, and the Nether. Accompanied by a loot chest that usually has gold items inside, and surrounded by lava, magma, netherrack, crying obsidian, or more. This is one of Mojang’s few instances of trying to actually educate a player on game mechanics that they would never know existed playing the game for the first time. 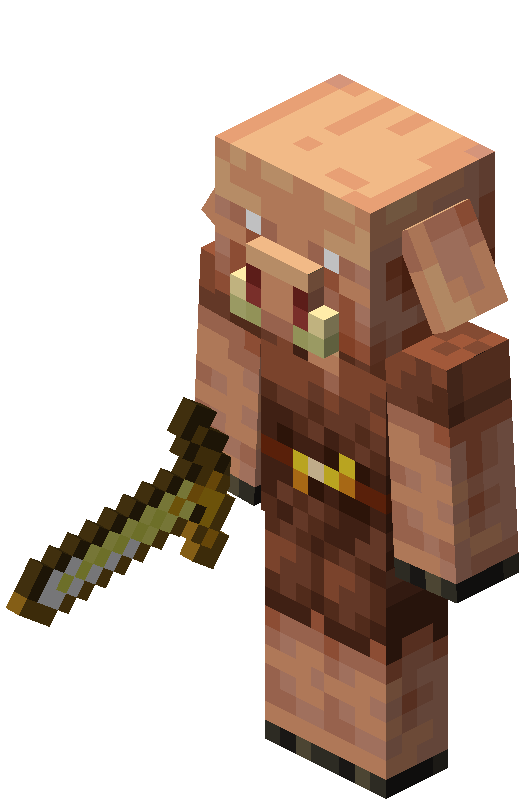 A new mob with a taste for butter! Piglins will attack any player on sight unless they are wearing a piece of golden armor. When given a gold ingot, Piglins will commence ‘Bartering’ which is a chopped form of trading that has the Piglin throw you a random item while consuming your gold. They’ll randomly spawn with a golden sword or crossbow, sometimes wearing gold armor. Piglins are scared of and will avoid all Soul Fire related things. That includes torches, lanterns, and campfires that use Soul Fire. Bringing them to the Overworld or the End will result in them becoming a Zombified Piglin. 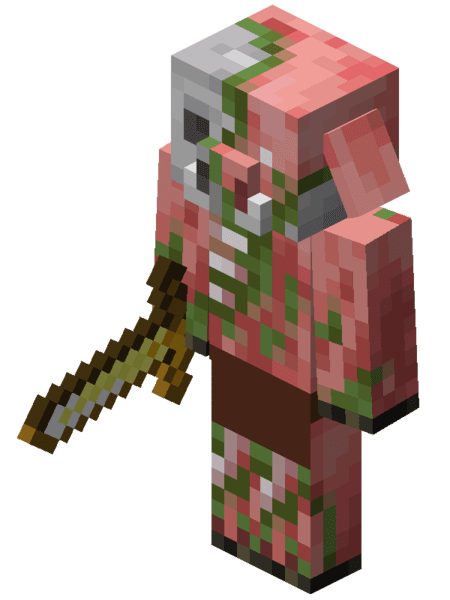 Essentially a reskinned Zombie Pigman. Zombie Pigmans have been redesigned and replaced by these guys. They act exactly as they have before, just with a cosmetic change. 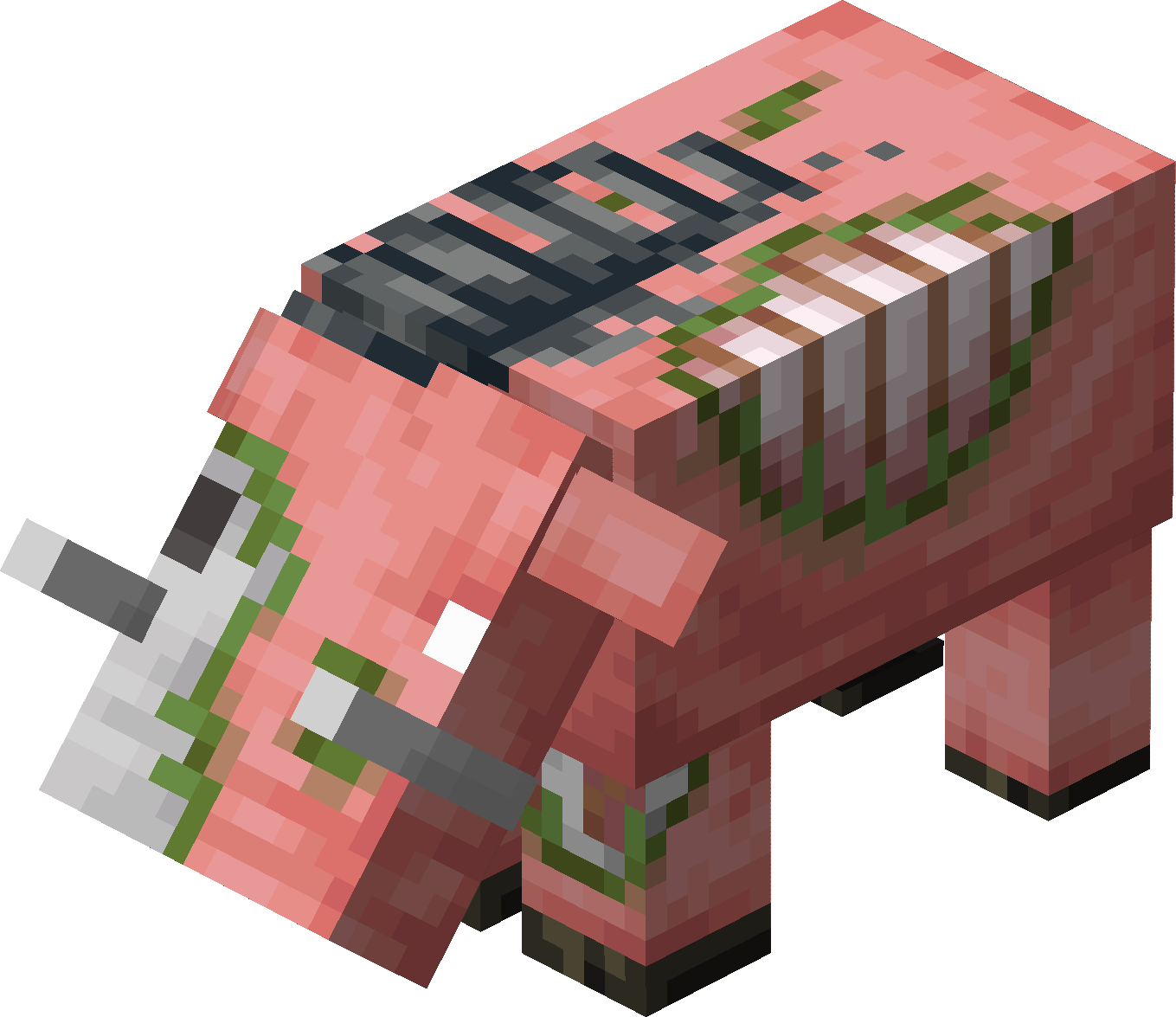 Spawning in the Crimson Forests, this mob is a hostile beast that hits like a truck. Although they aren’t as tough as an Iron Golem, they’re awfully close. It drops raw pork chop and leather on death. Can be bred with crimson fungi. Becomes zombified if it enters the Overworld or End just like Piglins. 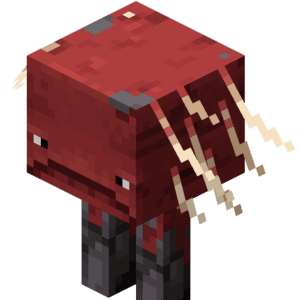 A somewhat ugly passive mob that you can utilize to cross the everlasting lava lakes of the Nether. They’ll travel as fast as a boat, but you’ll need a fungus on a stick along with a saddle to lead them in a certain direction. When out of lava, they shiver and turn a bluish-purple color. They also move significantly slower when on land. There is a small chance that they will spawn with a Zombified Piglin riding them, in which case a saddle will already be on their back. Convenient!

(Levels I, II, III) Increases movement speed on soul sand and soul soil. Only boots can receive the enchantment, and there’s only a 4% chance the durability will decrease per block stepped on. Can only be obtained through Bartering with Piglins or looting Bastions. 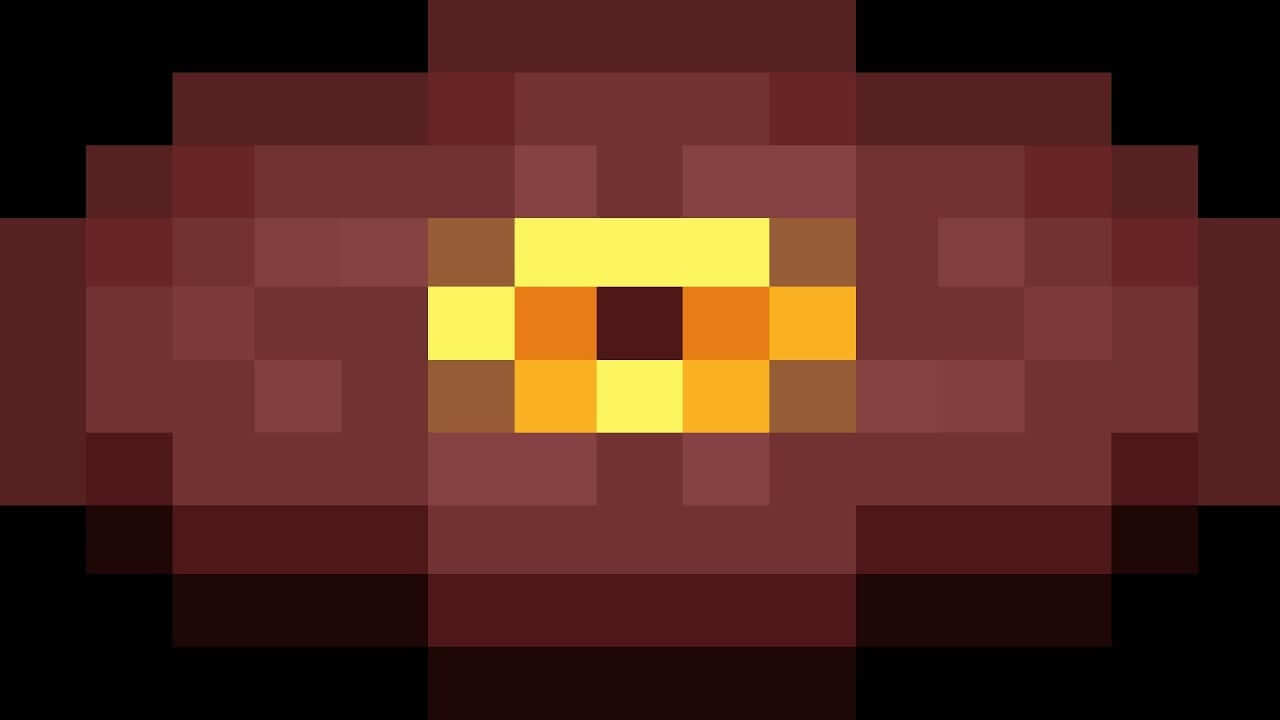 A new disc obtainable only from Bastions. Objectively the best one yet. 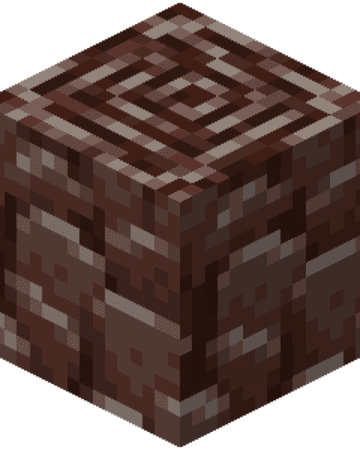 New block naturally spawning in the Nether that drops Netherite Scrap when mined (Must use a Diamond or Netherite Pickaxe.) The block is resistant to explosions.
Netherite Ingot: 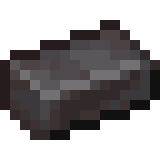 Combining Four Gold with four Ancient Debris to create this. The Ingot is used to upgrade Diamond Armor and Tools to Netherite Armor and Tools. The Netherite versions will be slightly better than their Diamond counterparts, having increased durability, damage, and mining speed. 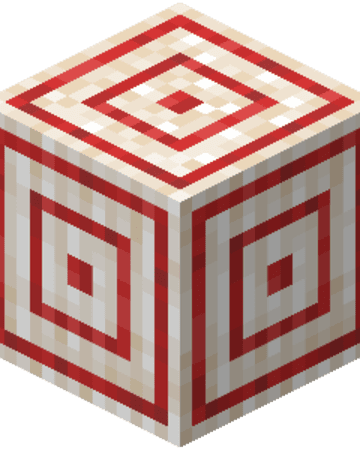 A block that resembles a target. When hit with a projectile, it sends a redstone signal. The strength of the signal can vary depending on the accuracy of the projectile relative to the bullseye in the center.

A blue variant of all the items listed. Obtained by combining them with soul soil or soul sand. 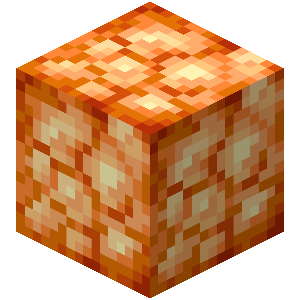 Grows on the fungal sprouts in Crimson/Warped Forests. A glowing block similar to Glowstone. 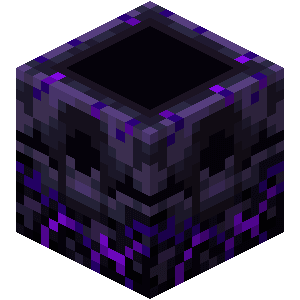 Used to respawn in the Nether. Crafted with three Glowstone, and six Crying Obsidian. This is a placeable block that needs to be replenished with glowstone, since every respawn consumes a charge. Placing this in the Overworld or End causes it to explode. 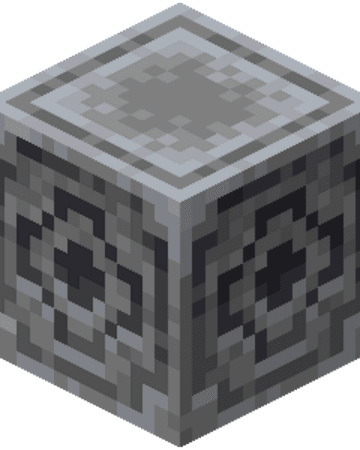 Can be combined with a compass, setting the compass to point to wherever the Lodestone is placed. Crafted with eight Chiseled Stone Brick and one Netherite Ingot.

These are all the major features included in the 1.16 Nether Update. There are some minor features left out of here that are unrelated to the majority of gameplay, such as Bamboo Saplings being renamed to ‘Bamboo Shoots’ and other things alike. If you’d like to read the official changelog, including the small details and fixes not covered in this overview you can find that here. I hope this overview informs you on every feature that you would want to play with in the new update, so good luck out there!