Setup and Play a Pixelmon Reforged Server in Minecraft

How to Make a Pixelmon Server

In vanilla Minecraft, a large number of players enjoy travelling the vast world as well as having their own pets. However after some time, the same pets and world can become repetitive and monotonous. This is where the Pixelmon Reforged modpack comes into play, bringing the ever-loved Pokémon elements into everyday Minecraft exploration. Installing this modpack is very easy with Apex Hosting, so today we’ll cover how to get it installed and get started!

How to Install Pixelmon Server-Side:

How to Install Pixelmon Client-Side:

Pixelmon is a modpack that tries to take the gameplay of Pokemon, and add it into minecraft. You can find pokemon, train, level, raise, and befriend EVERY pokemon. You can also configure it to only have a certain amount of pokemon. But there are apricots, and fruits you can collect to make adventuring easier. With maps you can download to have a curated experience or even replay a main title pokemon game in Minecraft ! There are so many reasons you should play pixelmon, but the best one is you can do it with friends ! Yes we even host pixelmon servers !

Upon spawning in, the first choice you will be given is choosing your first starter Pixelmon. You can choose between fire, water, and grass from each of the main games so far.

As you explore the world, you will find numerous Pixelmon, from smaller Numel up to a gigantic Wailord. Each one is unique and available to catch and train. 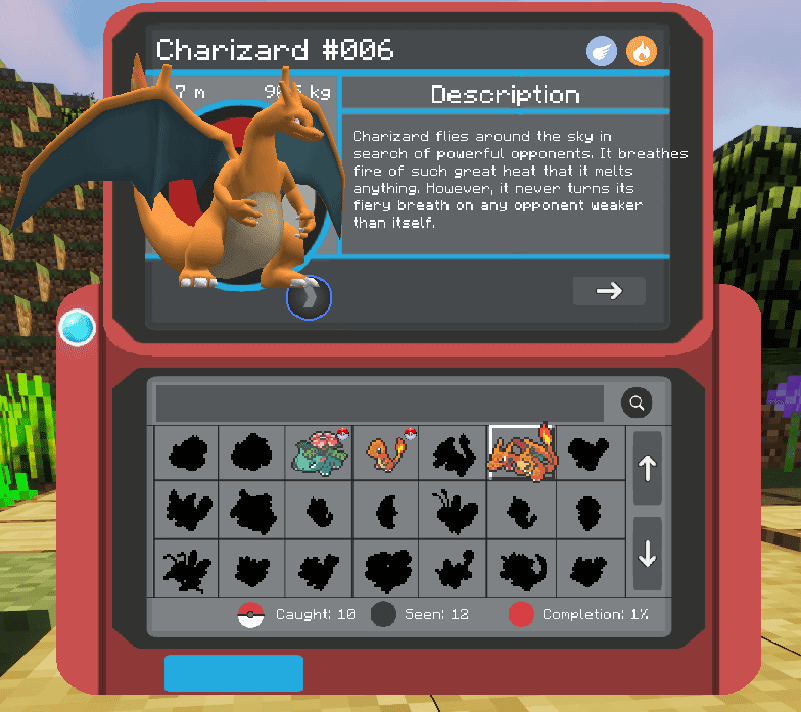 One of the main goals is to collect every single Pixelmon, filling up the Pokédex to 100% completion. With almost 900 of them, this is no easy task! 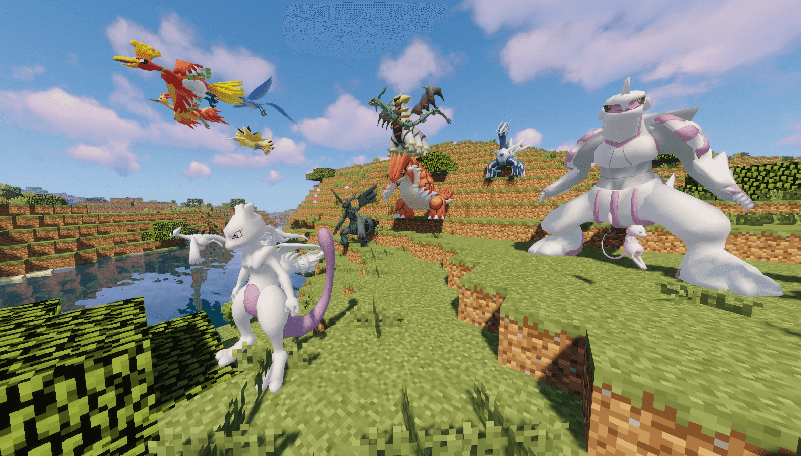 Some of the most impressive Pixelmon are the legendaries. These legendary and mythical creatures are significantly harder to find, but are often much more powerful because of it.

As you complete the Pokédex, searching for them will soon become a difficult task, but trading with other players is a great way to complete it faster.

Another large part of Pixelmon are the battles and trades. As you explore the world, you will encounter many fellow trainers and other Pixelmon, allowing you to battle them for money or resources. 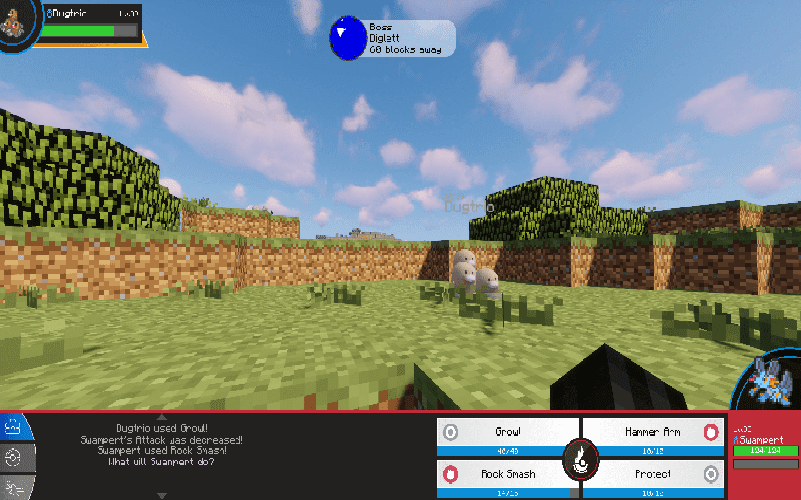 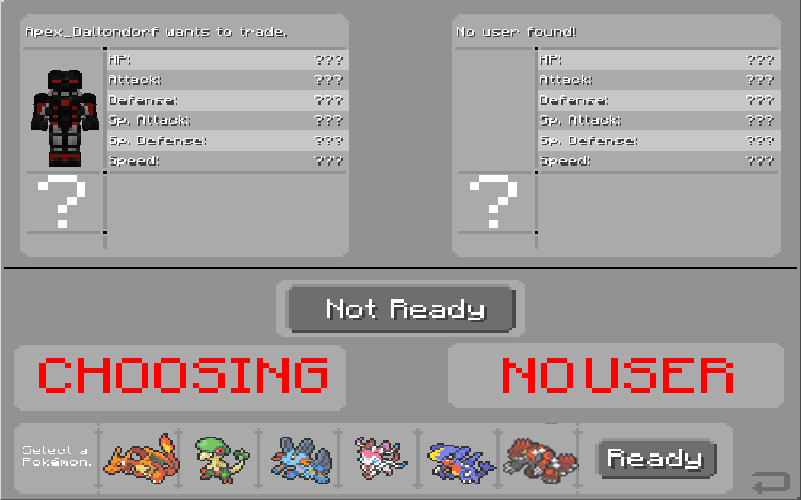 Additionally, one of the many blocks available in the modpack is the trade machine, allowing you to trade your Pixelmon back and forth with other players. Even if you trade back and forth, this is a great way to fill out each other’s Pokédex. 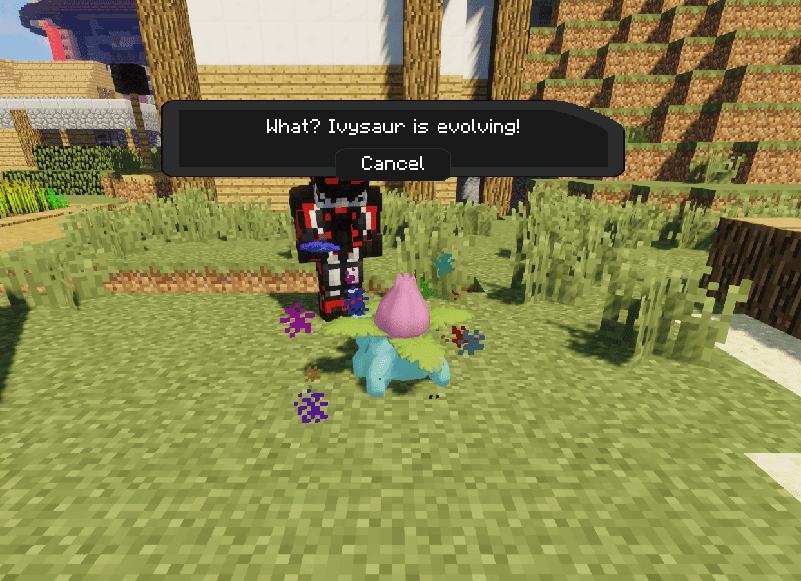 As your Pixelmon grow with you, they will soon be able to evolve to larger and more powerful forms. Some will evolve at a certain level, some need specific items, and some will even evolve with the aforementioned trade system. 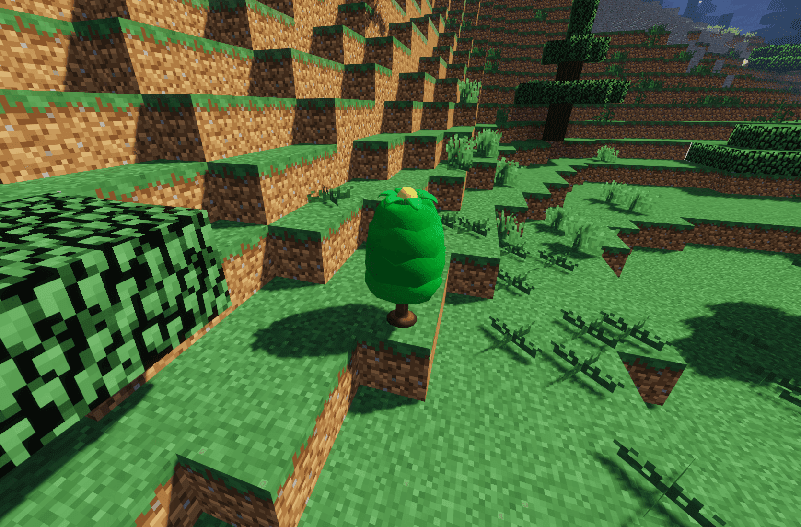 In order to catch Pixelmon, you’ll first need to get some Pokéballs. There are a few ways to obtain them, such as through shops, but you can also craft them yourself. Throughout the world you will find Apricorn trees, which is the main ingredient to create the Pokéball shells. 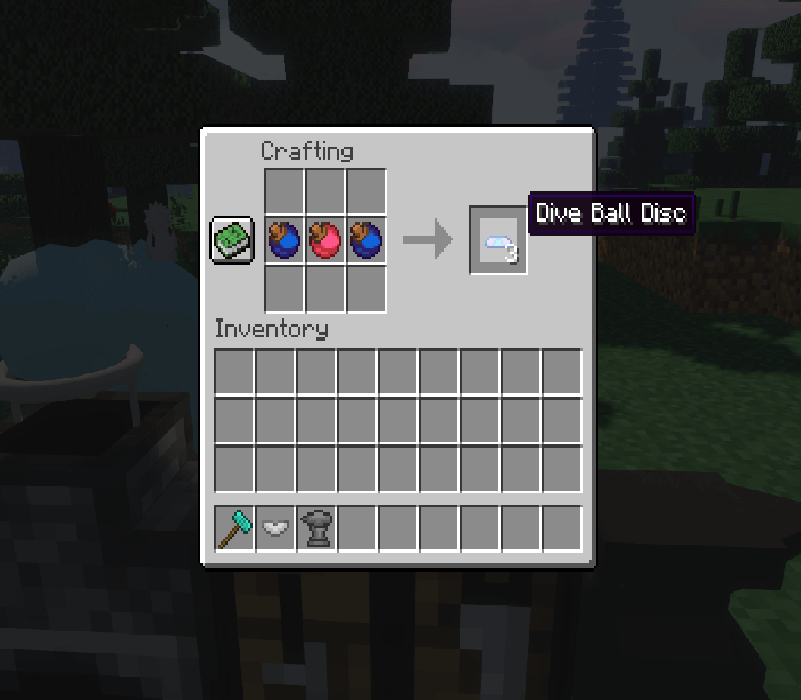 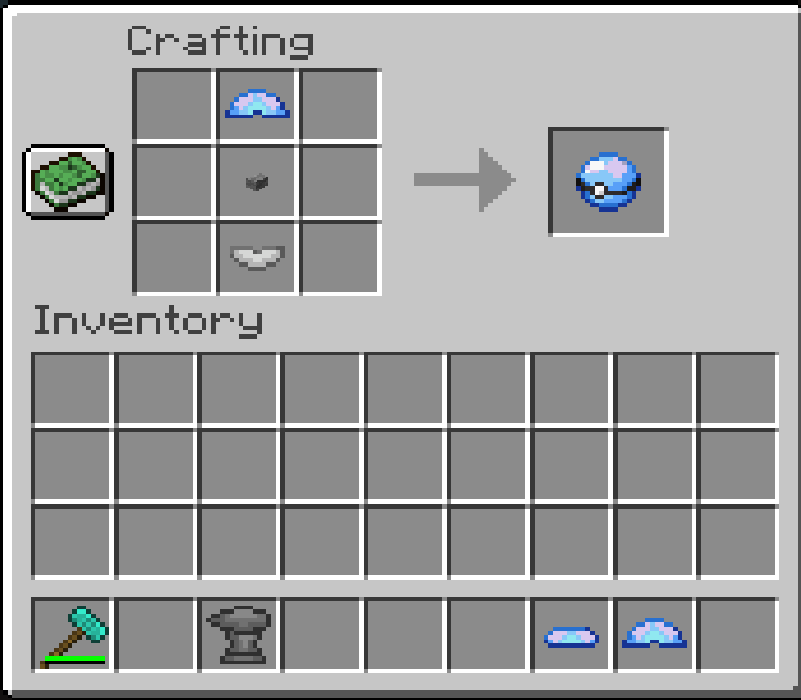 To make a Pokéball, you will first need to create a base using 3 iron and 3 apricorns to make a Pokéball shell of your choice. When that is done, you’ll use the Pixelmon mod’s special anvil and a hammer to hit them into shape. You can then combine the top, bottom, and a button to make a finalized Pokéball!

In some areas, such as villages, you will find some buildings, such as the Pokémart and Pokémon Center. 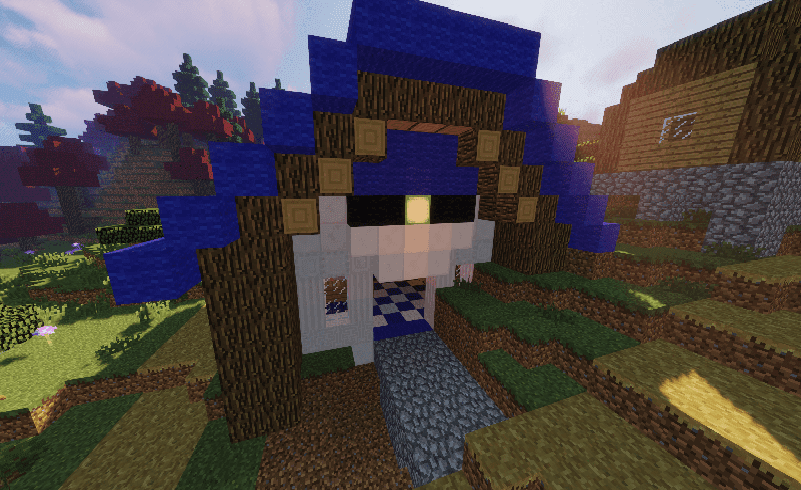 Used to buy different items like Pokéballs, potions, as well as other battle items. 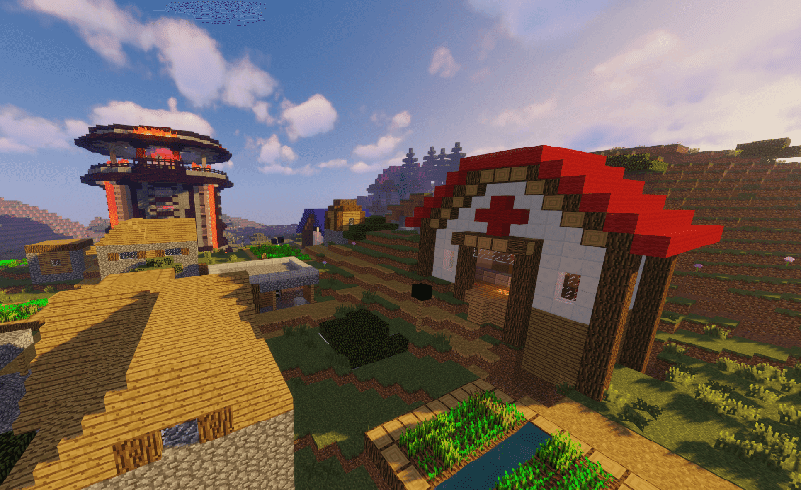 Free to use, the Pokémon Center heals your party Pixelmon to full HP. 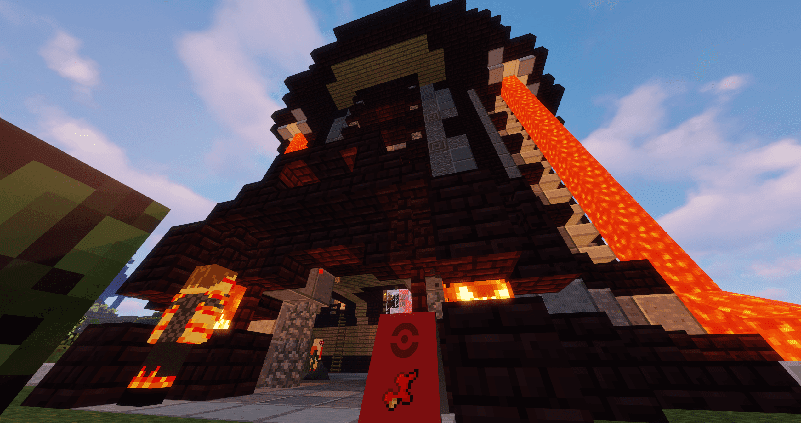 In the world, each gym is a different type and will give a different badge. Once you beat the gym leader, you will obtain the badge.

Another interesting mechanic in the Pixelmon Reforged modpack is the inclusion of the breeding system from the main games, with an additional twist. In order to breed Pixelmon, you’ll first need to place a ranch block, then place your desired ‘mons within it. 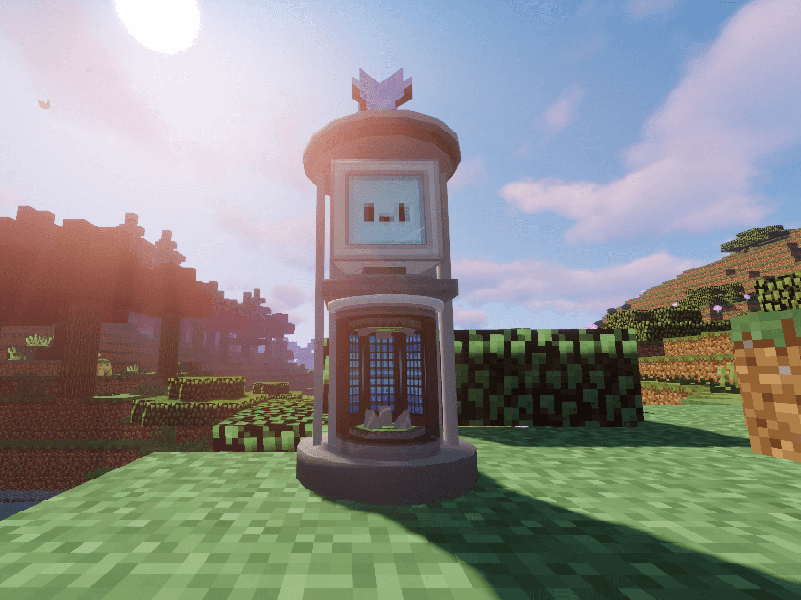 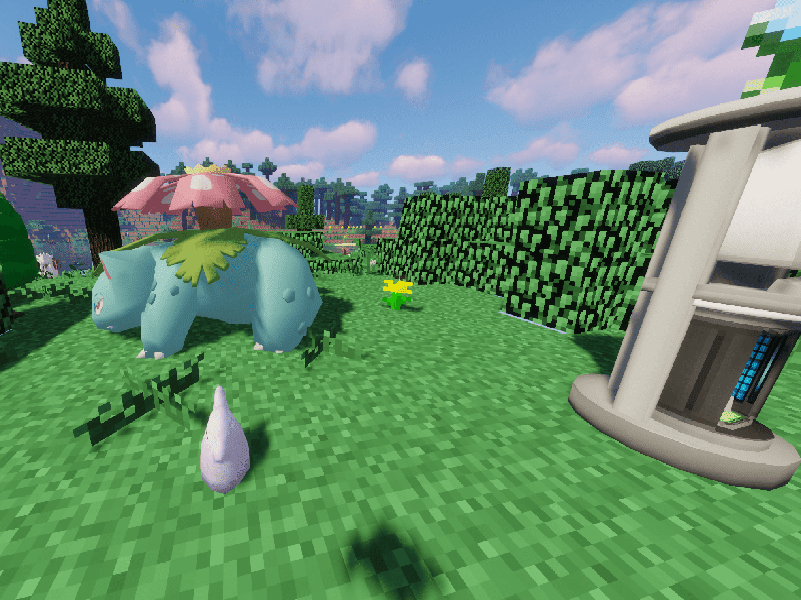 You will then need to ensure you have a suitable environment for the Pixelmon, which depends on the type. If you have a grass-type, having a grassy area with plants will assist with the process. Once you get an egg, simply walking around with it will allow it to hatch!

When it comes to obtaining a strong Pixelmon, there are two stats that are very important. These are IVs and EVs, which determine a Pixelmon’s stats, sometimes before they are even trained.

IVs, otherwise known as Individual Values, are determined when a Pixelmon spawns in. If all stats are 31, it is a perfect Pixelmon. IVs can be checked using the /ivs [slot #] command. For example, /ivs 1 will check the first Pixelmon’s IVs.

EVs, also known as Effort Values, are determined through training and items. Each Pixelmon that is defeated will increase the EVs in a specific stat. Each Pixelmon will start off with 0 until properly trained. A Pixelmon can have a max of 252 in a single stat, or a total of 510. You can check them with /evs [slot #], similar to the previous command.

My Server is Stuck Loading:
This often occurs if a pre-existing world was loaded on the server. It is highly recommended to generate a new world when changing to a new modpack to prevent these issues. Alternatively, if a mod was removed, you will need to go to the server console and use /fml confirm to force-start the world.

I get an error when joining the server:
Oftentimes, if a player is unable to join the server, it is because the mod isn’t properly installed on your own computer. Ensure you are using the official Pixelmon modpack to have all of the proper mods installed to join the server.

Biomes O’ Plenty isn’t loading in:
Make sure that the level-type is properly set to BIOMESOP, as the Pixelmon mod is on 1.12.2. If the level type is anything else or a new world isn’t made afterwards, the biomes will not be used properly.

Pixelmon mobs and items aren’t spawning in the server:
The primary cause for this is the server not properly using the modpack. Ensure that the server was switched to Pixelmon Reforged through the panel and restarted.

How To Make a Pixelmon Reforged Server With Apex Hosting