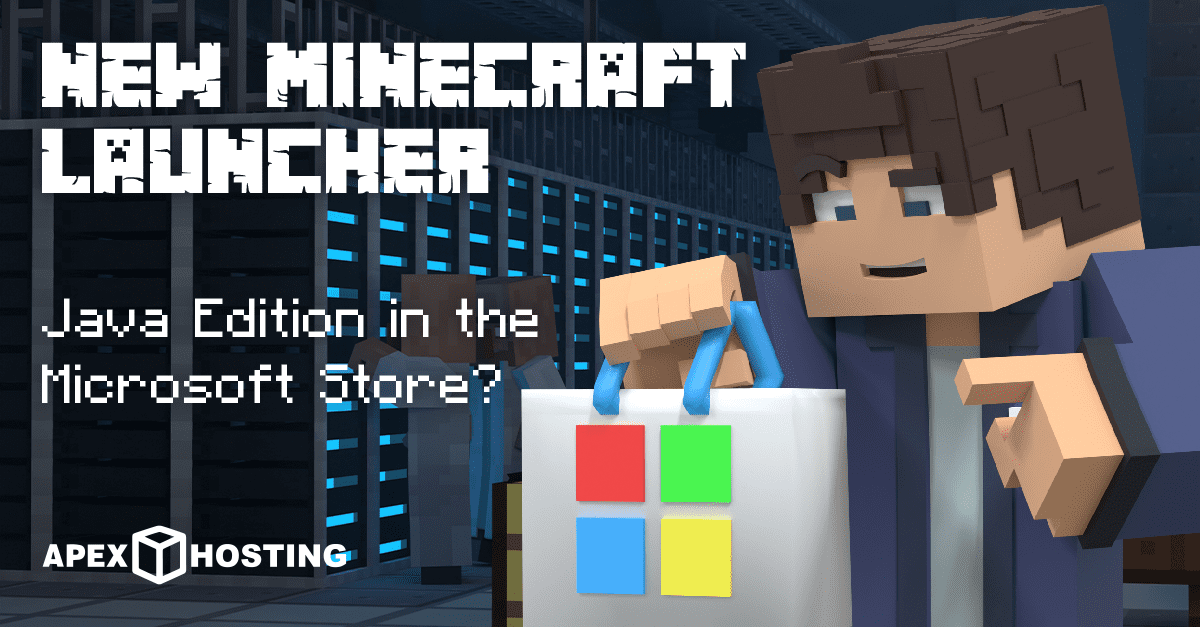 Everyone loves the classic Minecraft launcher, as it’s a tried and true method of playing our favorite block game which has lasted through the ages. But sadly, all good things must come to an end, or rather, a rebirth. A new launcher has arrived, and all your favorite Minecraft games have been made easy to access from a single location. Now, you probably have tons of questions, so Microsoft has prepared a few answers for you which I have the honor of presenting to you.

What is this new Minecraft launcher? – This is a new launcher available in the Microsoft Store that allows you to launch Java Edition, Bedrock Edition, and Minecraft Dungeons all from the same location. It’s quite efficient!

Do I need the new launcher to play Minecraft or Minecraft Dungeons? – No, not necessarily, but it will help you save time if you’re someone who plays all of the Minecraft related games.

Where do I get the launcher? – For the time being, Microsoft suggests installing the launcher on your C: Drive to avoid any potential problems.

If I already own one or more of the games somewhere else, can I use the new launcher? – Yes! It’s been designed to consolidate all your existing and future Minecraft games in one place. Download the new launcher here.

Is the new launcher free? – The Launcher itself is free, but you will need to purchase the games individually in order to play them. (unless you already own them)

Does the new launcher give me access to all games? – No. You still need to purchase each game individually, but you can now also subscribe to Xbox Game Pass to gain access to all Minecraft related games.

What platforms will the new launcher run on? – Windows 10, version 1903 or newer.

What’s the difference between the old launcher and the new one? – The old launcher only launched Java Edition and Dungeons, along with being made for Windows ⅞. The new launcher will launch those titles with the addition of Bedrock Edition and it works on both Windows 10 and Windows 11. 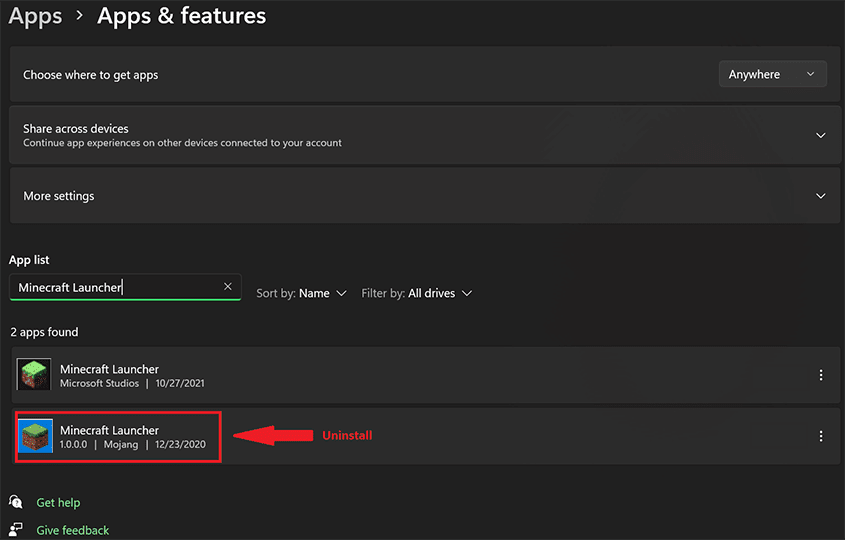 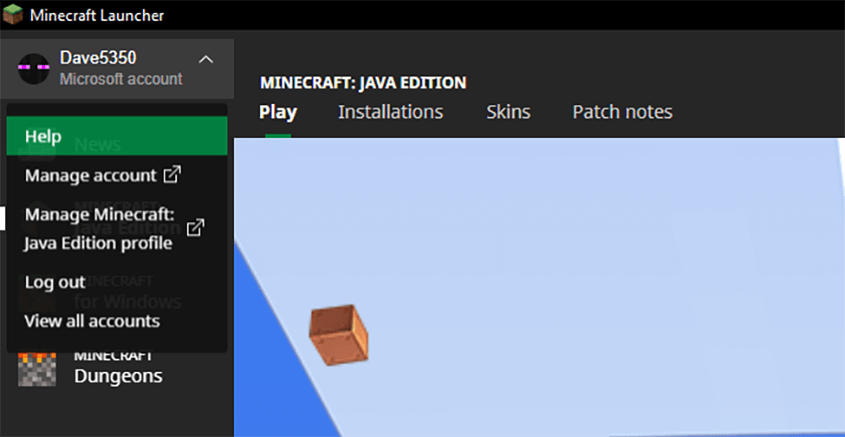 How do I switch between my Microsoft accounts to play my games? – You can click your username in the top left corner. From the drop down, select Switch Account. This will bring up a new window allowing you to sign into another Microsoft account. If Multiple accounts have been added, this button will allow you to switch between them. You can also open Settings and look under the Accounts tab. This will also allow you to switch accounts or add new ones. Please note that you can only be signed in to one Microsoft account at a time.

I don’t see my games or a “Play” button to press; how can I play? – You may be signed in to different Microsoft accounts in the Store and Launcher. You will need to make sure you’re signed in to the Microsoft Store using the same account that you’re using to sign-in to the Minecraft Launcher. If you have more than one Microsoft account, be sure to use the one that has your copy of Minecraft when signing in. 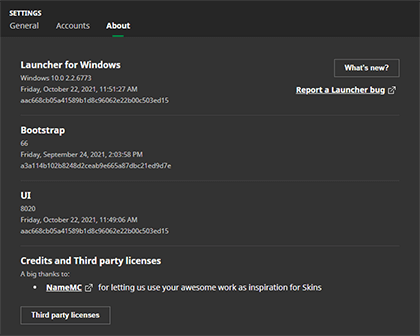 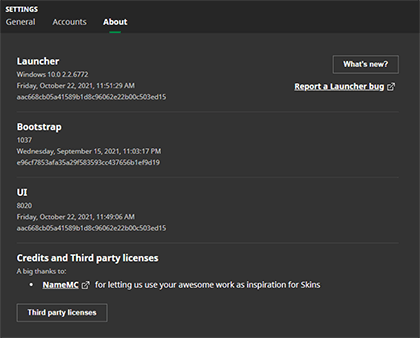 How do I update the new launcher? – When a new update is available you will be prompted to update. To manually update you can check the launcher’s settings.

How do I make sure I have the new launcher and not the old one? – You can check which launcher you’re using by opening the ‘Settings’ and selecting the ‘About’ option. The new launcher presents itself as ‘Launcher for Windows’ while the old one just says ‘Launcher’ which you can see in these images. 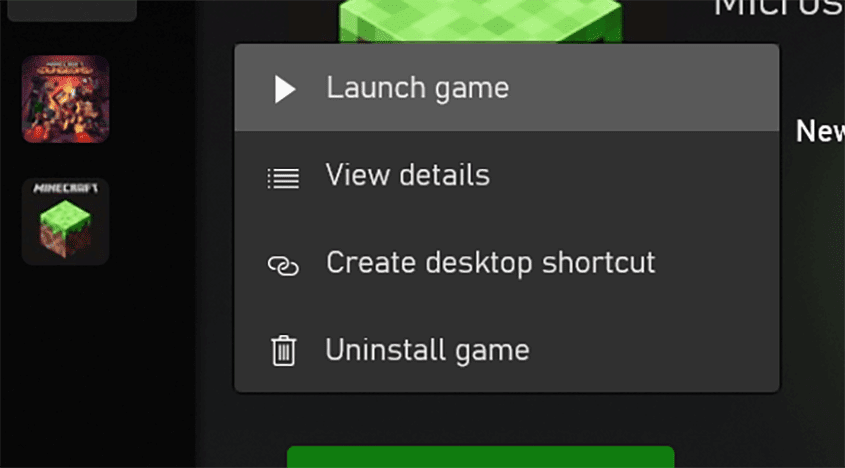 How can I make a Desktop shortcut for the new launcher? – Open the Xbox App for PC. On the right hand side, you will see icons for the titles you own. RIght click on the launcher icon and select ‘Create desktop shortcut.’

If you are unable to create the shortcut from the Xbox App for PC, you can follow these steps:

What happens to my current save files for Minecraft Dungeons? – The new launcher will automatically detect your save files. Once you log in to the new launcher you should be able to pick up right where you left off.

I’m having problems with the new launcher. – Contact Minecraft support with a detailed description of your issue. Do your best to include screenshots whenever possible.

Where do I report bugs I find in the new launcher? – Report bugs here.

Is the Beta version of the game available in the launcher? – For Bedrock Edition, currently only the published versions of the game are available. For Java Edition, you are still able to play on older releases and snapshots just fine.

Does this mean players on Java and Bedrock can now cross-play? – No, crossplay between Java Edition and Bedrock is not officially supported. However, if cross-play interests you, check out our guide on GesyerMC.

Wow! What a mouthful of information. It was pretty difficult keeping track of any and all possible questions that you might have, but to be fair, it is another difficult time to be a Java Edition player. First we have to migrate our accounts to Microsoft accounts or risk losing them entirely, and now this? Then again, this change isn’t mandatory. In any case, I hope I answered all of your possible questions related to the new changes, and have a great day!