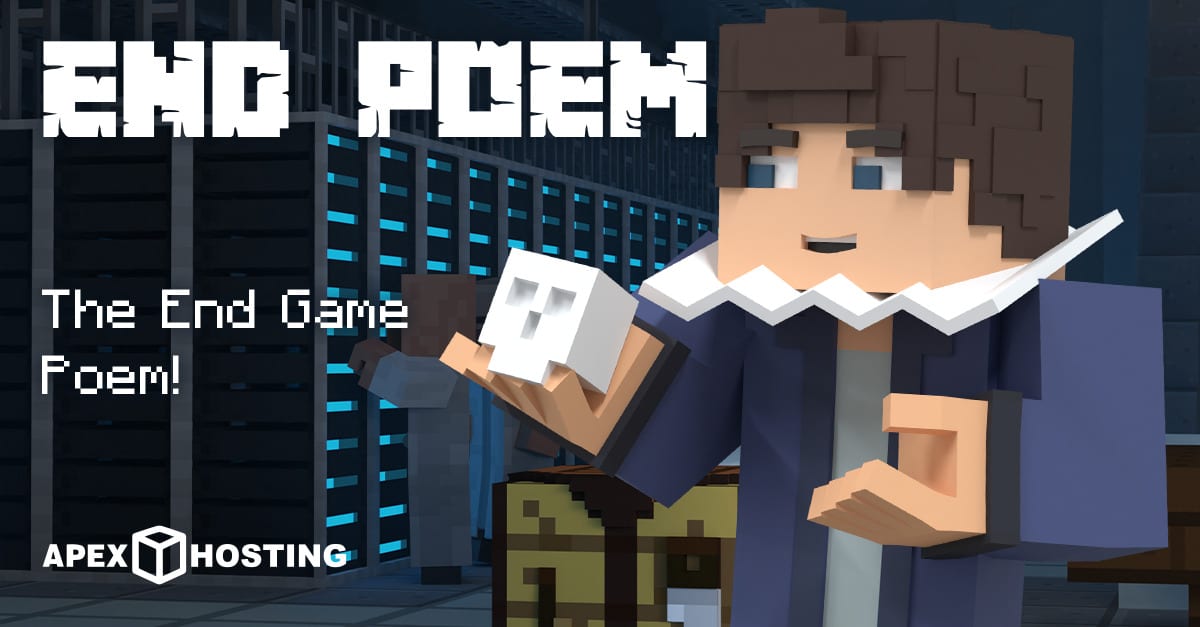 So, you’ve just killed the Ender Dragon and opened the portal back to the Overworld, but something’s weird. After you’ve grabbed the Egg and hopped in the portal, a story of sorts plays out. A wall of text is on your monitor, something totally different from anything else in Minecraft. What exactly is going on here, how does it relate to the typically loreless nature of the game, and who are these characters? Today, we’ll be going over somewhat baseless speculation on the conversation between the two unnamed characters that occurs after you beat the Ender Dragon and hop through the portal. Let’s begin. If you want to pull up the full ending for yourself, you can do so here.

So, let’s look at the obvious details first to create a solid foundation for our speculation. The end credits sequence is a conversation between two beings of unknown origin who have been watching the player, or you, the entire way through your playthrough. For the sake of this blog, we’ll be referring to them by the color of their text. Green and Blue.

Not only do they know your name (through your Minecraft username) but they discuss your victory over the finish line. The conversation starts with “I see the player you mean” suggesting that the two beings were discussing the player and his/her journey beforehand. Blue explains that by defeating the Ender Dragon and entering the portal, the player has reached a ‘higher plain’ and is able to read the thoughts of both of them. They then discuss how our imagination chooses to perceive their thoughts as text on a screen that is part of the game, and they find that endearing. To me, this is a big theme that is pushed throughout the entire poem. The idea that our imagination and creativity are beautiful things, and that the world in itself without the context of our creativity and senses has no substance. The notion that we apply meaning and beauty to things solely because we choose to. 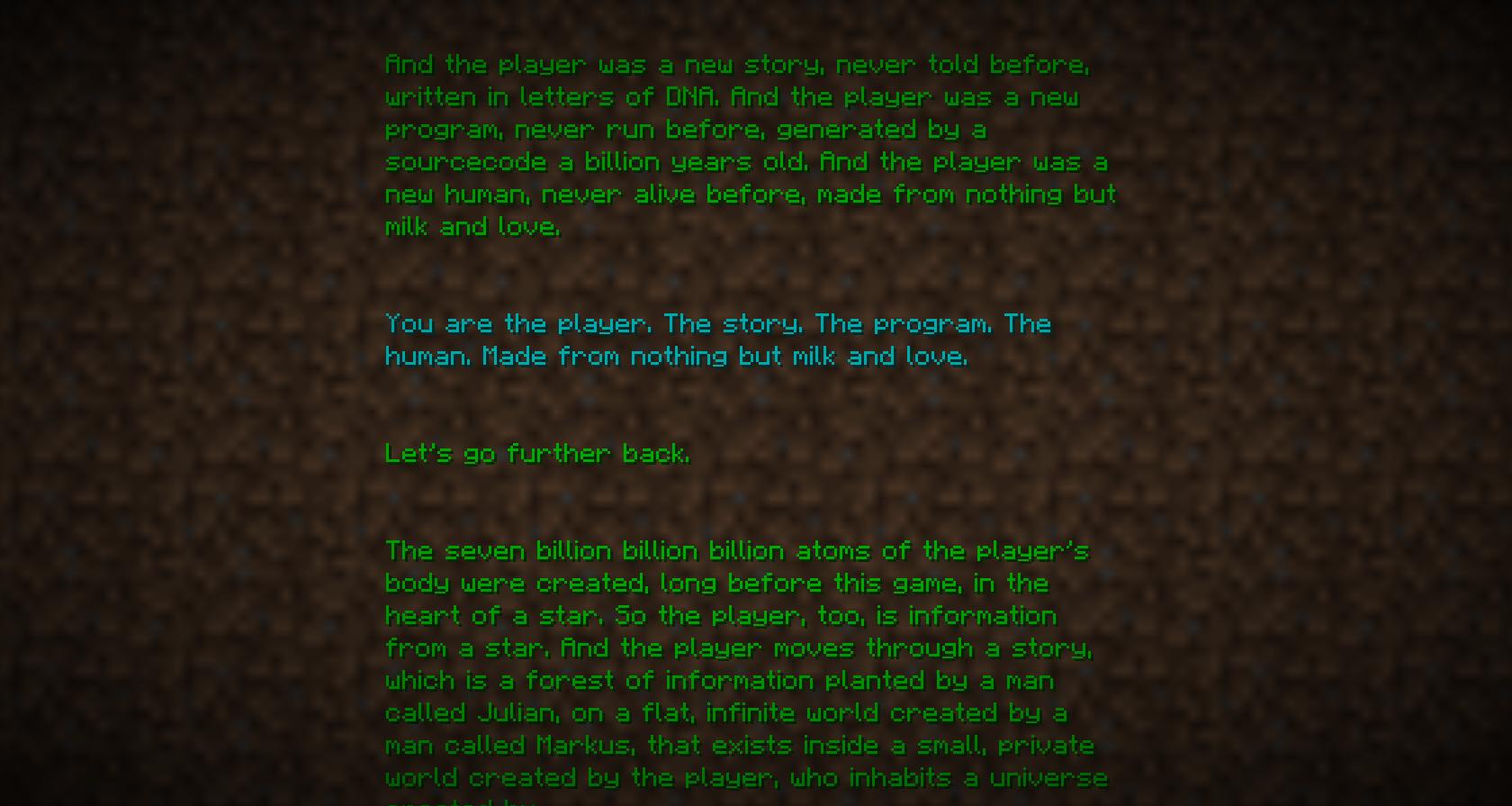 Next, Blue and Green talk about the player’s dreams and what the player dreamed about. They claim that the player’s dream was about trees, water, shelter, hunting, being hunted, creating, destroying, and more. This is obviously suggesting that the entirety of the world of Minecraft is merely the result of the player’s imagination, and it goes back to the theme that the world has only just as much meaning which we apply to it. Blue and Green then describe what the player created, for what reason, and where, but the details are blocked by weird symbols. The exact details are blocked, and not readable to our eyes, as Green explains. Blue retorts with the idea that once we fulfill our lives and live life to the fullest extent, we will be able to understand. This is the full extent of what I can interpret from Blue and Green’s conversation.

What we don’t know

After Blue and Green move on from the world of Minecraft, they begin to get a lot more philosophical, which in turn leads to there being a less clear interpretation. I’ll still do my best to speculate the true meaning of the text.

Blue and Green move on to discuss the concept that the player does not always imagine a perfect world, that there is darkness and sadness just as much as there is happiness and creativity. Blue explains that the presence of sorrow is what gives joy meaning, and that to rid the player’s life of all that is bad is to devalue the accomplishments and happiness that they have earned. This can be understood in very simple ways, such as how the long and perilous journey that the player had to go through to get to the End made the final fight with the Ender Dragon all the more meaningful. However, this also applies to our real lives. The idea that we need pain and suffering to value and appreciate the good things in life is a great lesson to learn, and can apply to all of us.

Green expresses their desire to let us know how they feel, that we as the players are meaningful and important, that we create real constructs that matter. In all honesty, it’s very cliche uplifting commentary on how the player matters and although they may think they are a small insignificant speck in the universe, they are special in their own way. Blue reminds Green that we can read their thoughts, and thus can see Green’s true feelings. But, Green does not care. Green insists that sometimes the player allows the negative thoughts and bad times to get the better of them, and Green wishes so badly that they could physically tell us that it will be ok. Some people interpret this scene as a sort of message to the player to spend more time working on making themselves happier in the real world rather than playing Minecraft, or video games in general, and I can see how that would be valid. This is supported by the fact that Blue and Green both agree shortly after, that telling someone how to live is wrong, and that the player needs to discover the right path on their own. Furthermore, the final quote shown at the end of this dialogue supports this theme, but I will talk about that later.

After Blue and Green both agree to not force their beliefs onto the player, they decide that Green will tell them a fictional story that contains ‘the truth’ as a sort of theme. They believe that if the story pushes a certain narrative, it will be stronger than merely expressing the knowledge in a naked fashion.
In this story, Green and Blue are speaking directly to the player, asking them to feel their own presence as a part of the universe. This can be interpreted as part of the real world, virtual, or both. Blue tackles the elephant in the room by suggesting the question “Who are we?” to which he names off numerous different titles assigned to god in different societies. This suggests that these two beings, Green and Blue, were worshipped in some way over the course of multiple societies. Green and Blue explain that the player is just as important and crucial to the universe as they are, and that without them, there is no meaning assigned to everything they have interacted with.

This is the trippy part, because although the story is clearly explained to be fictional, it is directly addressing the player’s real life. Green explains that the player’s perception of reality sometimes views the world as it is, a giant globe, the player being a full human, while at other times they are a miner on a flat, infinite landscape. This story ties back to the main theme that our dreams, or rather our imagination and creativity have the express power over our perception of reality, and that life is merely what we define it as based on our five senses along with our sixth and strongest one, our mind.

At the end of all of this lies a powerful quote by Mark Twain which in my opinion expresses the main theme of the poem perfectly. It reads as follows: 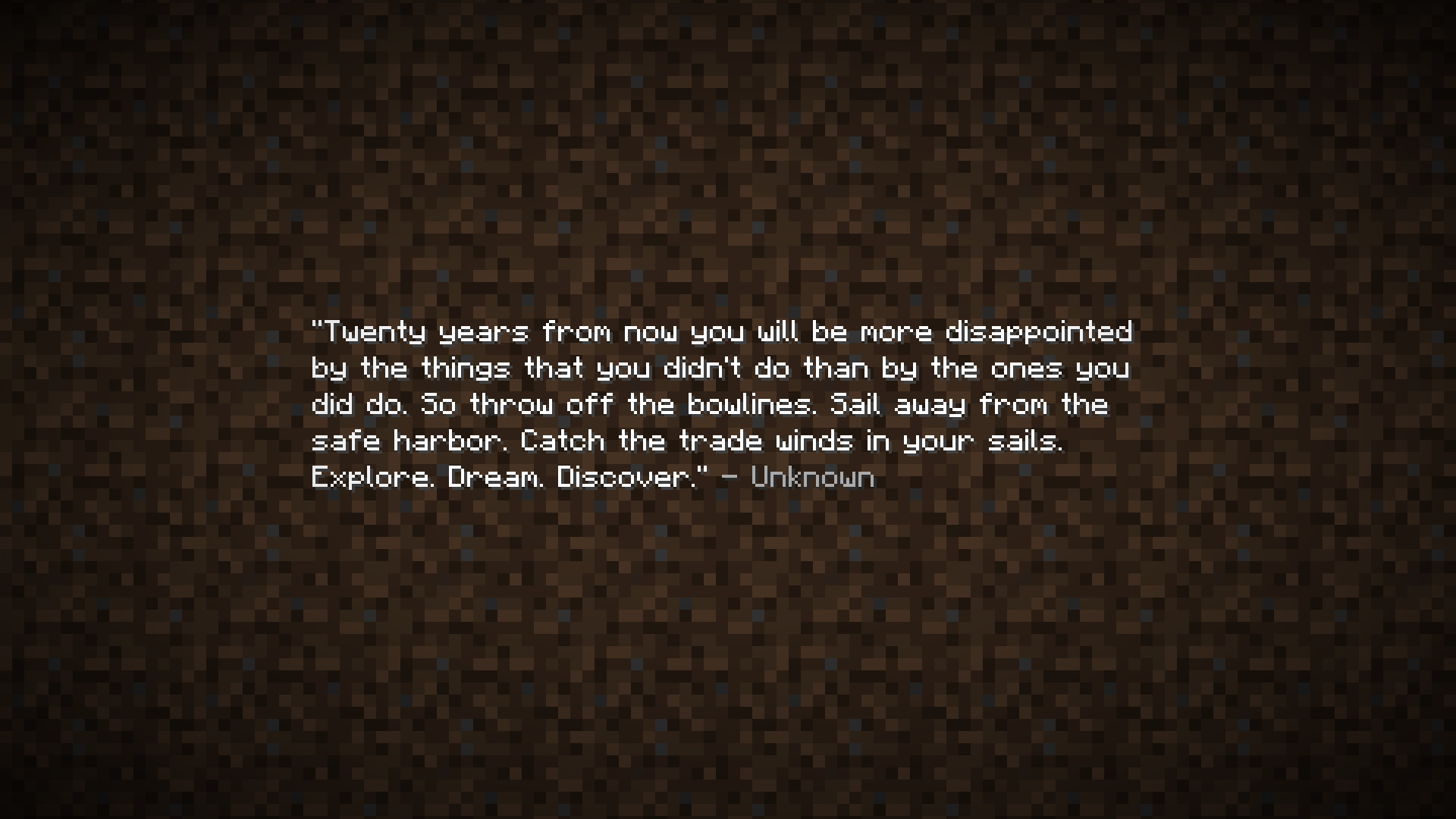 To me, the main theme is that you should live life to the fullest, and avoid having any regrets in the future. That is to say, I don’t think it implies you should just do whatever you want, but that you should take more risks even if they’re scary, and open up as much as possible.

Welp, that’s all I got for you guys today. I hope I gave an interesting introspection on what it means to perceive the physical world, and the way we use our imagination and creativity to inject value into our lives. Overall, the ending of Minecraft is pretty complex and nuanced, at least for its userbase. With that said, I hope you all have a great day!