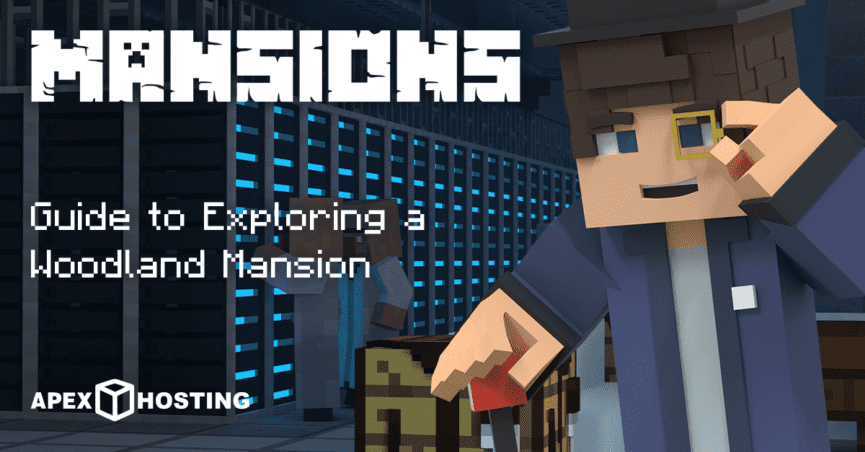 If you’ve played Minecraft, then you already know about the randomly generated structures in the world. Whether it’s villages, strongholds, or pillager outposts, these buildings are scattered throughout the map. However, there is one special structure that is extremely rare to find, the Woodland Mansion. This is my favorite area to explore, as you can get valuable loot, fight off strong mobs, and uncover secrets! Although, due to challenges locating them, some Minecraft players haven’t even encountered one yet. It might be for the best though, as these mansions are hostile environments with many mobs around, which requires powerful equipment to survive. Regardless of the challenge, exploring these structures is worth the struggle since each one is unique with different loot to find. 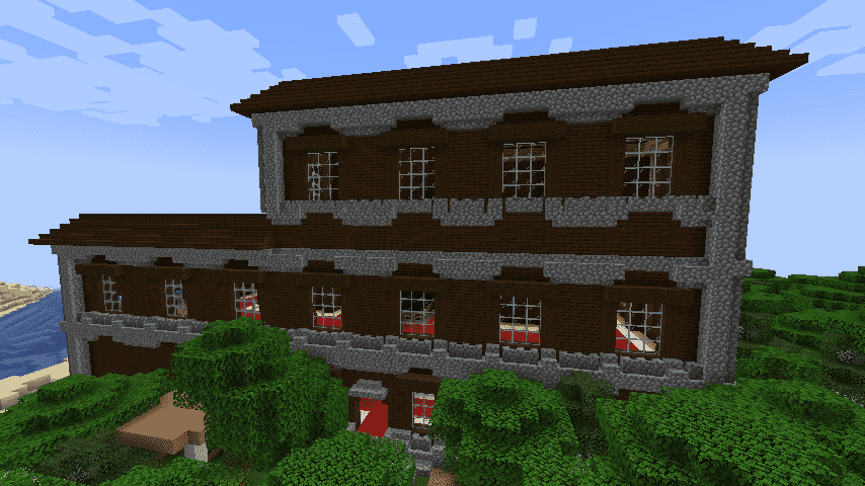 Imagine exploring a jungle biome and you come across a large structure, with a mysterious vibe to it. This is likely a mansion, unless Herobrine created a surprise for you. Either way, these buildings generate thousands of blocks away from spawn and are typically found with woodland explorer maps from cartographer villagers. If you don’t want to spend emeralds on useless maps, then try your luck by randomly stumbling upon it. This tends to be extremely difficult to do, unless you’re me since I’m so lucky. Once you find a mansion, there are many randomly generated rooms with mobs and resources to uncover. We’ll briefly review what you can find in these rooms so you have an idea of what to expect.

Let’s start with rooms, you know, the areas inside a building that contain materials. Yes, it’s a complex concept but is needed to reveal the mysteries of woodland mansions. These regions of the structure can have tons of chests, weird looking structures, and possibly contain secrets! This is all determined by generation percentages in the game, so sometimes you can get really lucky with what spawns. 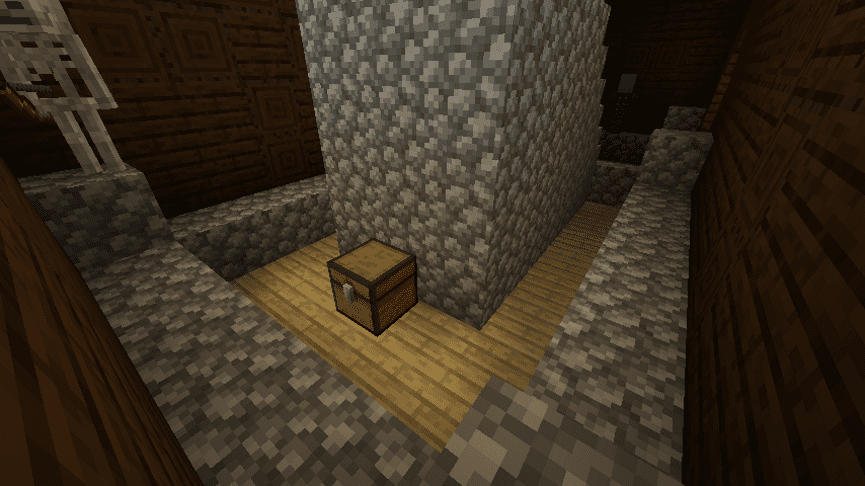 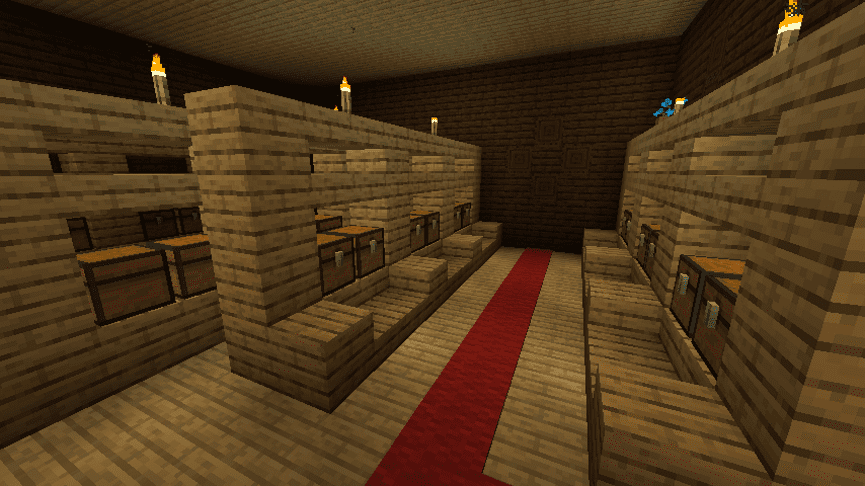 In order to get any form of loot, you’ll need to locate chests. These can be hiding in odd spots around the mansion or in an obvious area. Most of the time, I get very bad items and equipment from them. However, you might be better at raiding these things than I am. Just make sure to bring a torch or other light sources, as a lot of the rooms are dark…like my humor. Anyway, check all the areas to make sure you don’t lose out on some powerful loot.

In rare cases, random and cool structures can appear in mansions. It’s my favorite aspect about these buildings, as you can find a giant flipping chicken! They contain some valuables too, but it’s a rare event. With that in mind, don’t hold your breath trying to get unique materials from them. The rare structures are mainly for show and decoration, which is still sort of cool. 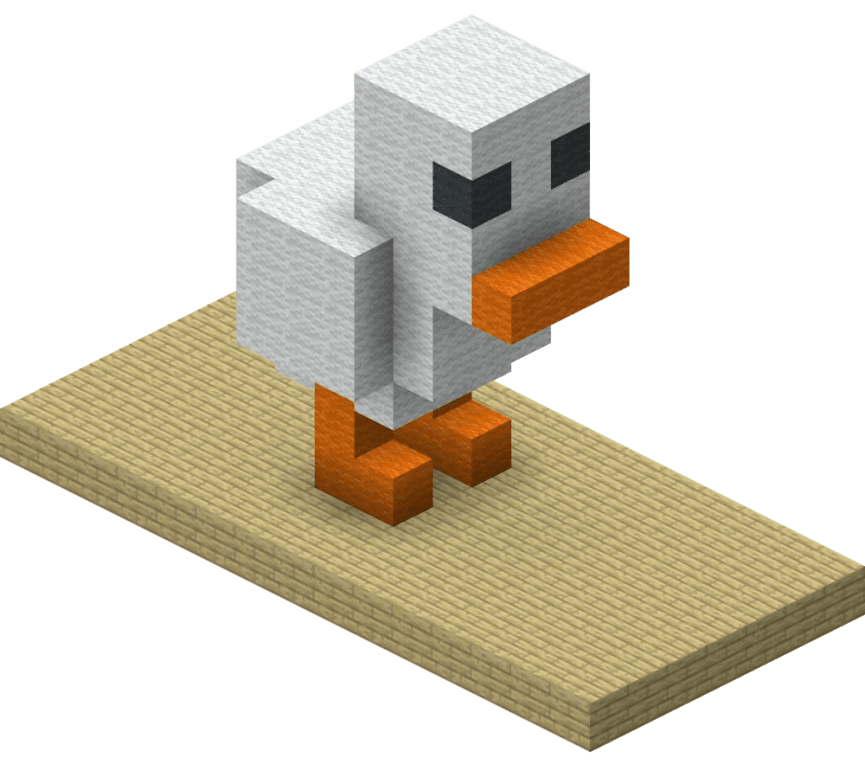 Other times, instead of finding chickens, you can locate obsidian lava structures or even fake end portals. These special designs have rare blocks, such as diamonds that would be more beneficial than useless creations. Personally, I never found a single structure like this in-game. It appears to be extremely lucky to even find one in a mansion. At this point, normally collecting valuables would be faster to get good materials. 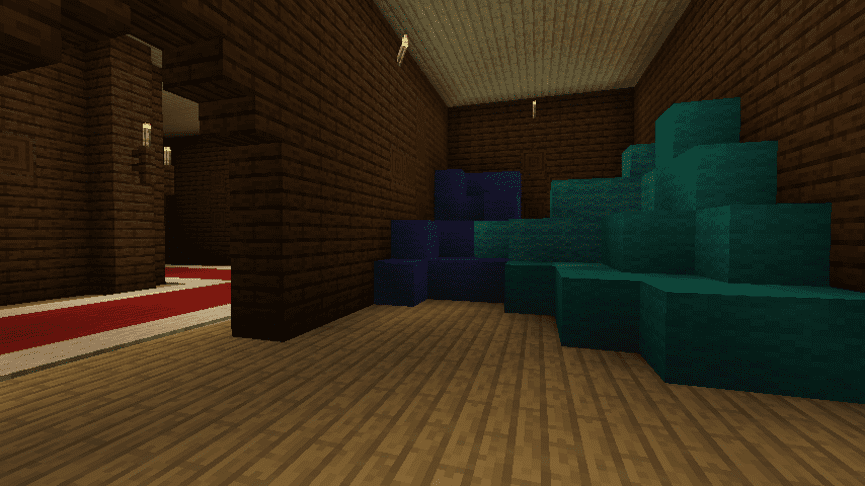 Besides the cool or chest rooms, you’ll always encounter default ones in a woodland mansion. These normally don’t have anything valuable in them, which isn’t too surprising. If the structures only had powerful items without normie items, then this would be too easy for survival players. There has to be some level of grind in Minecraft, as that’s the whole purpose of the game. In any case, most of the rooms will be uneventful and something nice to look at while exploring.

There are unique entities that spawn in mansions, which are powerful creatures to avoid. Although, once you walk into the building all these mobs will start attacking you. Make sure to be prepped before taking on this challenge, as you will easily perish in-game without good gear.

The first hostile mob you’ll encounter is the Vindicator, a pillager-like entity that occasionally carries an axe. These types of mobs litter the entire mansion from top to bottom and will run at you, which is terrifying if you ask me. Even more spookier, vindicators spawn in groups up to three. I remember entering a mansion without knowing this and got instantly overwhelmed by the amount of mobs. 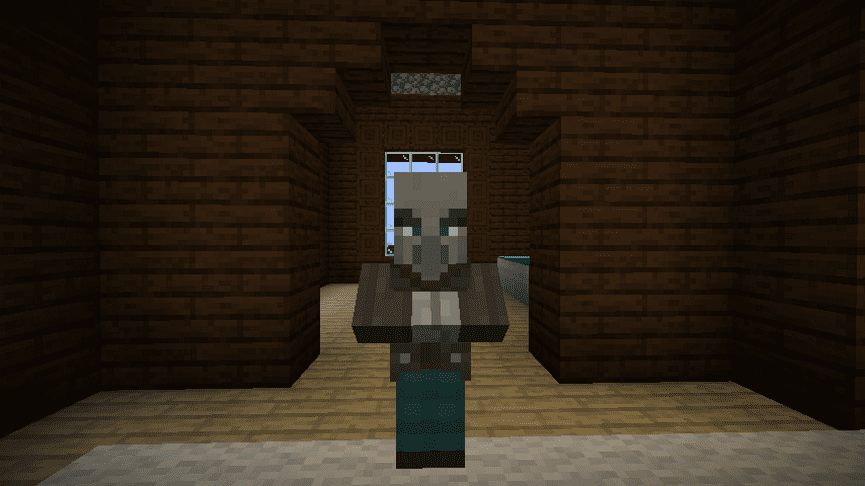 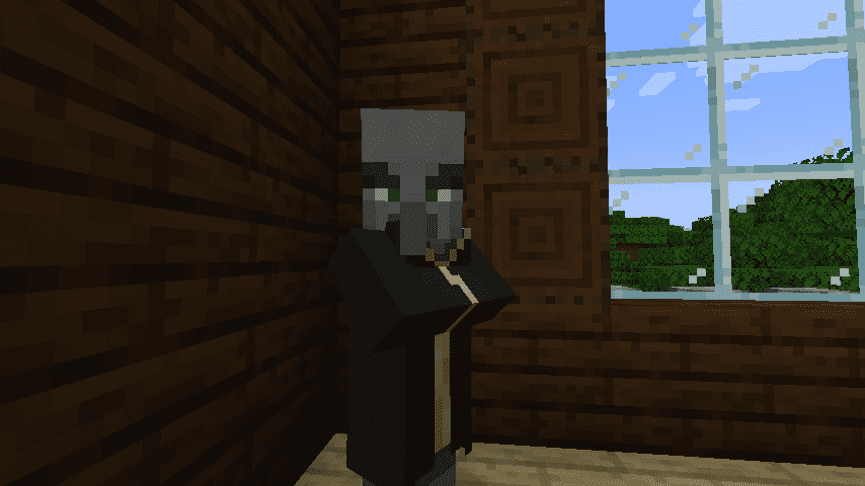 Similarly to a Vindicator, an Evoker is a wizard that can shoot magic and spawn a special mob to hunt you down. These entities are powerful, but once you kill them the drops are worth it. The best item you can get is a Totem of Undying, used to save your life when losing all hearts. Although, not only are Evokers powerful, they take a long time to kill due to the amount of spawned mobs. Definitely be careful when approaching them, or pull a leeroy jenkins to destroy everything.

The mob from an Evoker’s spawning ritual is called a Vex, which is a tiny ghost that flies at you with an iron sword. The scariest part about these entities is their ability to phase through blocks, meaning you cannot escape them unless they die. Luckily, vexes don’t have too many hearts so killing them in-game isn’t too bad. On the other hand, there are no drops so don’t expect anything special. 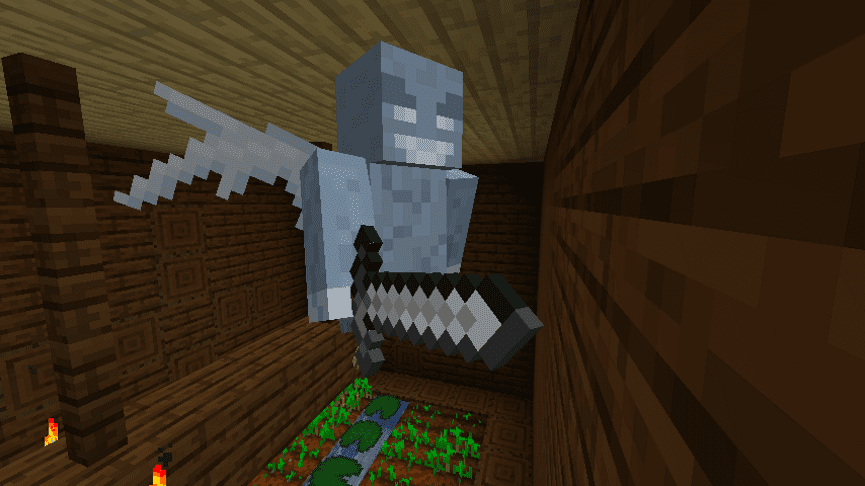 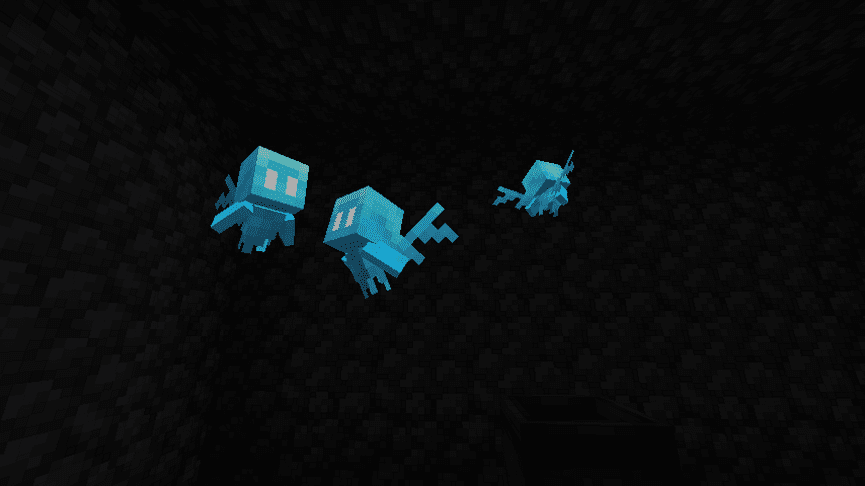 While exploring a mansion, you might find a jail cell with small, cute, blue flying entities. This mob is an Allay, which is a fun and passive mob that won’t hurt you. Additionally, there aren’t any drops from killing these little guys, so it’s only for big ol’ meanies! Besides this, nothing else is notable about allays. 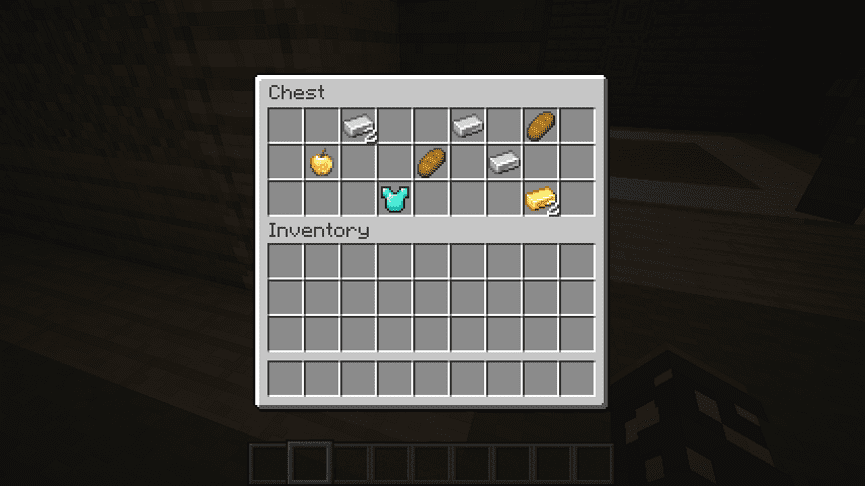 Finally, loot! When you find a chest in a woodland mansion, you can get a wide variety of items. For example, you can get an enchanted golden apple or a diamond chestplate. Most of the time, you’ll only get some melon seeds or bread unfortunately. If you’re curious about the item spawn percentages, head towards the Mansion Wiki. This is a nice touch to mansions and offers a good range of materials to obtain. Hopefully, luck is on your side when raiding these structures.

Woodland mansions are always an exciting place to explore in your Minecraft world, as there are tons of unique creations, items, and mobs. These buildings are indeed rare to locate, since they tend to be really far out from spawn. I tried looking for one, but was forced to use the /locate command. Whenever you do actually find one, you might want to turn it into a brand new base! It’s a great design with many areas for redstone machines, hidden doors, storages, and more. Otherwise, raiding all its loot and mob drops is a good option if you already have an amazing base. In any event, I hope this was informative and useful to your Minecraft adventures.