Minecraft is a game that primarily takes place in a fantasy-esque setting. Magic, dragons, and medieval technology reign supreme rather than science fiction. But sometimes, we just want a little bit more oomph, you know? When a sword just doesn’t cut it, you find yourself looking for a little more firepower. This is where mods come in. Mods can add firearms and blasters that do all sorts of things. Today, we’re going to go over the best gun mods we can find, and how they work. Let’s begin.

As always, the list isn’t categorized in any particular order. In fact, it’s not that large of a list. Minecraft just isn’t a very gun-friendly game, ok?

Guns Without Roses – this mod adds quite a few simple guns, several types of ammo, and a few enchantments. It’s meant as a simple Vanilla+ mod, according to the creator, and a foundation for other upcoming mods to use its systems. Just as the name implies, there are no roses included in this mod.

Guns fire instantly with a short cooldown, and their projectiles are fast and unaffected by gravity. There are five guns added with the mod, all of which are built upon vanilla systems using each simple ore. Iron, Gold, and Diamond. All of these can shoot multiple types of ammo of varying qualities which will improve or decrease their performance. The new enchantments can be used to further improve gun performance, adding more complexity to the systems. Very cool! Unlike the guns from other mods, these textures are two-dimensional. Some find this endearing and thematically fitting for Minecraft while others consider it low quality. It may not be for everyone, so take this into consideration. 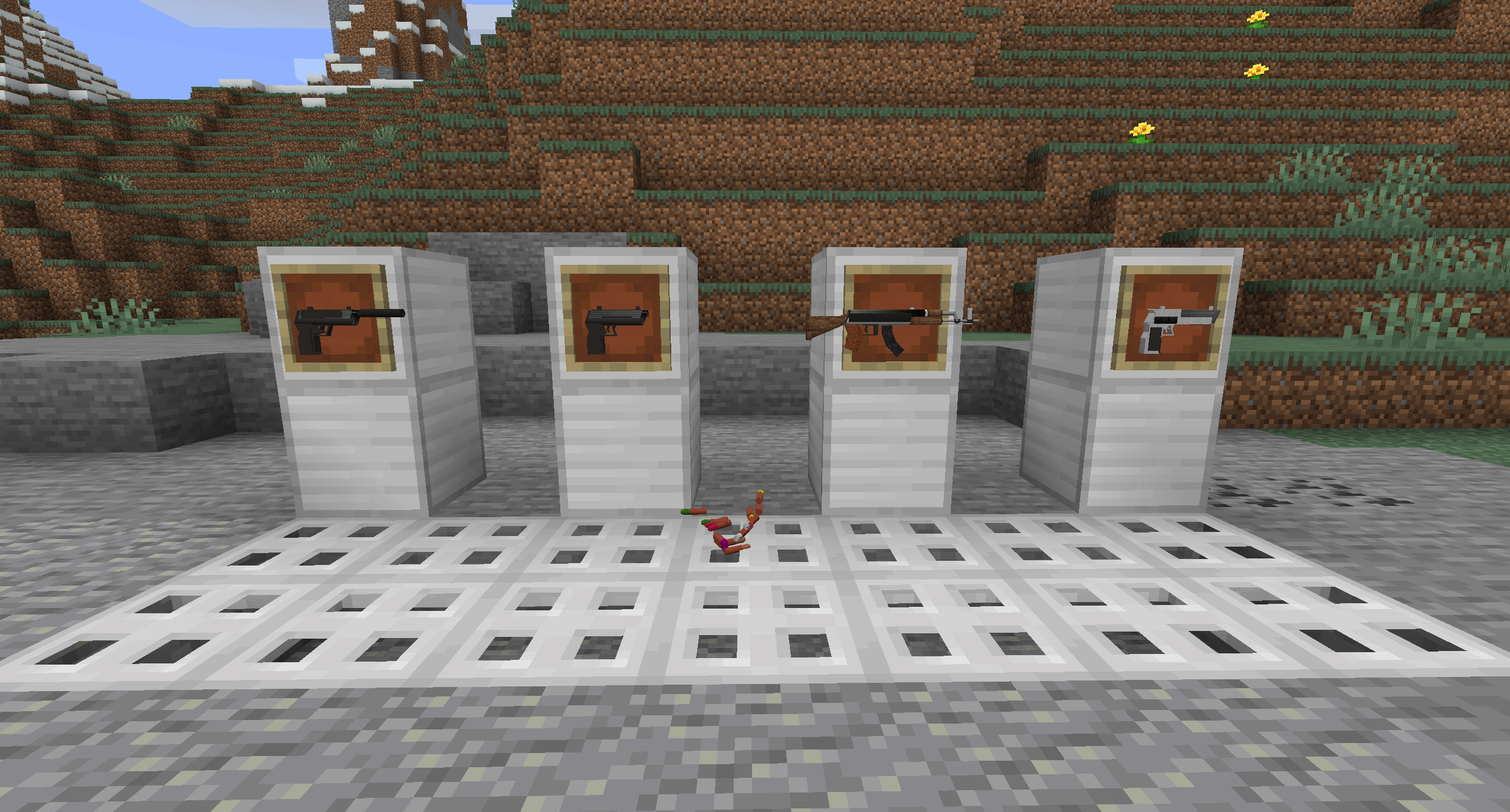 Guns, Rockets, and Atomic Explosions – definitely blunt in its naming, this mod adds exactly what it says it does: Guns, rockets, and atomic explosions. As the name implies, this is a little more than a gun mod. This mod adds rocket launchers and literal bombs just as much as it does firearms. They’re pretty destructive and very detailed.

Another aspect of this mod is its hyper-realistic models. All of the guns in this mod are either directly modeled after or inspired by real-life firearms. The rocket launchers and atomic bombs, however, are much more comical in their designs. Either way, they’re all well made.

MrCrayfish’s Gun Mod – a fairly new and exciting and exciting weapon mod that has a unique vision. Adding nine weapons in total, all can be highly customized to create your own unique variant. Using attachments and enchantments, you can increase the stat of a weapon to create even more powerful guns. Dyes can be used to change the color of any weapon or attachment. Furthermore, grenades and stun grenades are also available!

The best part of this mod definitely has to be the art style. As this mod is made by MrCrayFish, there is an assurance of quality that you don’t have with all mods. All of the models for each gun are custom-made and don’t impede on the Minecraft aesthetic at all. That’s quite the feat considering the variety here, with grenade launchers and bazookas. You can even land headshots for increased damage! This on top of great addon support composes what I believe to be the best gun mod in Minecraft.

If any of these mods have captured your interest, consider checking out how to install them here!

Bang! That’s the list done and dealt with. Despite the popularity of firearms, explosives, and cool stuff in the gaming community, gun mods just aren’t that popular in Minecraft. Curseforge alone barely has a few dozen, if that. I’ve done my best to compile this list of what I believe to be the most quality-driven ones based on a number of factors like popularity and content. I hope that you found a new mod to check out, and have a great day!