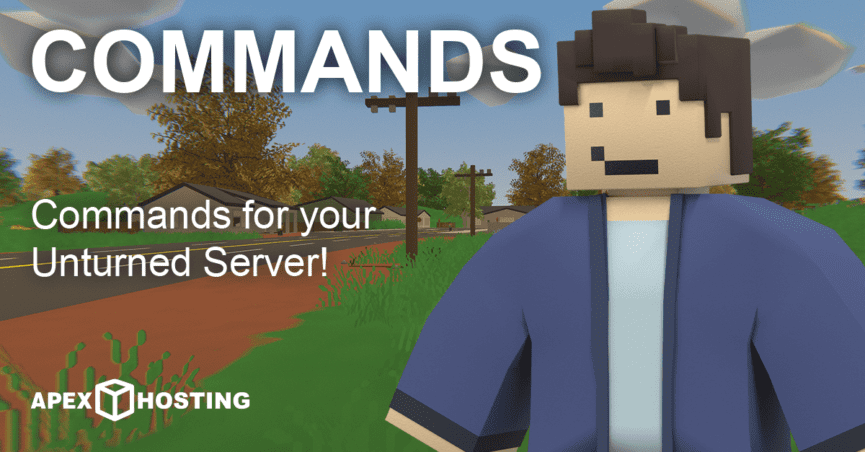 When owning an Unturned Server, you may eventually find yourself in need of making server adjustments. With an extensive list of Unturned commands, you may be unaware of all the available changes each of them performs. With these commands you can change the time of day, moderate a server, or even give yourself items to customize your gameplay experience. Inputting and familiarizing yourself with so many Unturned server commands can be confusing, so we have created this Apex Hosting guide to ease you into the world of Unturned commands.

To use these commands, you will want to press “J” in-game to open the text box. Then simply enter your desired command starting with a “/”. Additionally, you will need to ensure you are set as an admin.

Alternatively, some commands can be used in the Apex Server Panel console. When using commands directly in the console, omit the “/” at the beginning of each command.

/Admin [SteamID | Player] – Allows a specific player to use admin commands in the chat.

/Airdrop – Forces a dropship to perform an airdrop.

/Ban [SteamID | Player]/[Reason]/[Duration] – Bans a player for a reason and duration. The default value is one year and is shown in the console.

/Bind [IP] – Binds is a specific internal IP to the socket. Default is 0.0.0.0, meaning that all IPv4 addresses on the local machine can be used to connect to the server.

/Cheats [Enable | Disable] – Assigns your server to access certain commands, such as Give, and can only be used in the server’s commands.dat file.

/Cycle [Number] – Assigns the length of the day/night cycle in seconds.

/Debug – Provides information on the state of the server.

/Give [SteamID | Player]/[ItemID]/Amount – Gives a player an item.

/Gold – Restricts the server to only allow Gold players.

/Help [Command] – Explanation of the specified command and its function.

/Hide_Admins – Admins will appear as if they are normal players. Also allows the recording of cinematic footage without the admin labels visible to players.

/Kick [SteamID | Player]/[Reason] – Disconnects the specified player from the server, but allows them to rejoin at any time.

/Loadout [SkillsetID]/[ItemID]/[ItemID]/… – Gives players each item when spawning. Using a skillset ID of 255 gives the item to everyone. Can only be used in a server console or the server’s Commands.dat file. SkillsetIDs are from 0-10 in the same order as displayed when editing a survivor. 255 = All Skillsets.

/Log [Chat]/[Join/Leave]/[Death]/[Anticheat] – Enables logging Chat/Join/Leave/Death messages. Each parameter can only be Y or N.

/Map [Level] – Sets the map that the server loads on startup.

/MaxPlayers [Number] – Sets the maximum number of players that can join at one time.

/Mode [Easy | Normal | Hard]– Assigns the difficulty of the server.

/Owner [SteamID] – Gives admin rights to the steamid. Must be placed in the server’s Commands.dat

/Password [Text] – Assigns the codeword required for entry to the server.

/Permit [SteamID]/[Tag] – Adds the specified player to the list of users allowed to join the server. This acts like a whitelist.

/Perspective [First | Third | Both | Vehicle] – Assigns the perspective of the server.

/Players – Shows a list of the current player on the server.

/Port [Number] – Assigns the port of the server. Port +1 and port +2 are also used, so remember to open them on the router as well.

/Queue_Size [Number] – Sets the maximum number of queued connections the server is willing to hold on to.

/Save – Forces a proper save of the server state.

/Slay [SteamID | Player] – Kills the specified player in-game and bans them for a year.

/Spy [SteamID | Player] – Takes a screenshot from the target player’s perspective perspective and saves it on the caller’s computer as Spy.jpg

/Sync – Allows players to share save data between your servers.

/Time [Number] – Assigns the current time in seconds of the day/night cycle.

/Timeout [Number] – Assigns a maximum ping threshold to the server before a client is kicked.

/Unban [SteamID] – Removes a player from being banned.

/Unpermit [SteamID] – Removes a player from the whitelist permit.

/Votify [Vote Allowed Y|N]/[Pass Cooldown]/[Fail Cooldown]/[Vote Duration]/[Vote Percentage]/[Required Players] – Sets up voting. Pass/fail cooldown specifies the amount of time that players must wait after a successful/failed vote before initiating another vote. Vote duration specifies the amount of time for each vote to remain active. Vote percentage indicates the percentage of “yes” votes required for a successful vote and must be expressed in decimals (e.g., 0.6 for 60%). Required players specify the minimum number of connected players in order to initiate a vote.

/Weather [None | Storm | Blizzard] – This adjusts the current weather cycle.

/Welcome [Text]/[R]/[G]/[B] – Sets a chat box welcome message shown to clients when connected to the server.

/Whitelisted – This makes only permitted players allowed to join the server.

Some commands work, while others do not:
Some Unturned commands will work by default, while others need to have cheats enabled. To solve this, visit the Config Files on the Apex Server Panel, then open the Commands.dat file. On a new line, add Cheats Enabled. Once complete, press Save, then restart the server.

Get started with your own unturned server in 5 min and start trying out these great features.