In Vanilla Minecraft, hunger and exploration are often intertwined through gameplay. After some time, hunger becomes easy to quell and exploration can become dull. Introducing RLCraft, a modpack focused on realism, adventuring, and exploration. With Apex Hosting, it is super easy to install and play this modpack. Today we’ll be showing you how to get it installed and play it.

RLCraft, otherwise known as Real Life Craft, is a 1.12.2 modpack featuring over 120 mods. This pack is owned by Shivaxi, with contributor credit given to Icebelly and Charles445. RLCraft is hand-tweaked to improve the play-style of everyday experiences. With massive exploration, dungeons, and even a thirst system, it is very difficult. From the owner of the pack directly, “You’re going to die… a lot”, so be ready for it. With that said, let’s get started!

Upon first spawning in, your first day will be different from vanilla Minecraft. One of the main changes is the requirement of right-clicking any ground items to pick them up. There are a few resources you will want to collect before you can gather wood and defend yourself. 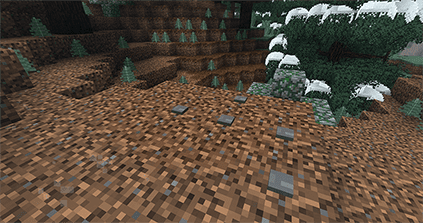 As you explore the world, you may notice small stones scattered across the world. You can pick these up by right-clicking them. 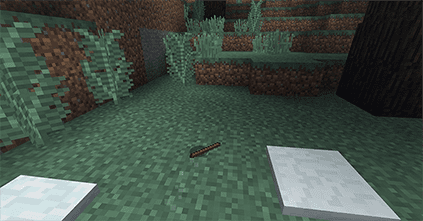 Since you cannot yet break trees, your primary source of sticks will be to break leaves. Gather a few of them, as they’re needed for some upcoming recipes. 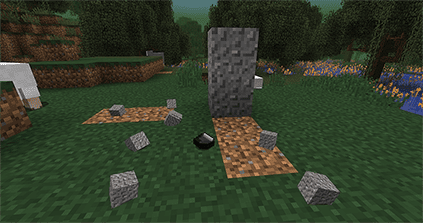 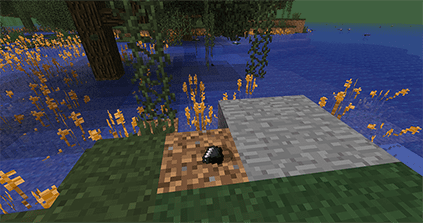 Thankfully, flint is still gathered the same as vanilla Minecraft. Locate some gravel, then break it in order to get flint. You will then want to right-click stone blocks with the flint to get flint shards.

Now that we have some materials, we can begin crafting some of our tools to continue progressing. Once you are in a safe spot, open your crafting menu. 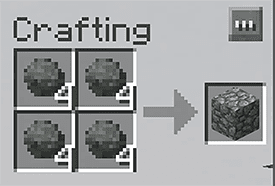 With the rocks from earlier, place 4 of them in your crafting bar to receive 1 cobblestone. This is used for a variety of stone tools, both vanilla and modded. 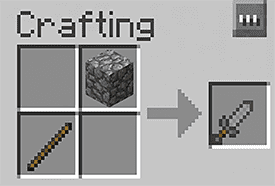 The first recipe will be 1 stick with a cobblestone directly across from it to yield the stone dagger. This is the easiest weapon to defend yourself against the numerous enemies. 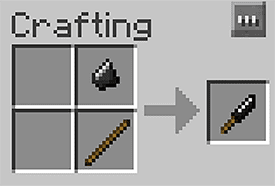 With 1 stick and a flint shard above it, you will create a flint knife. This is used to cut grass, receiving plant fibers from doing so. 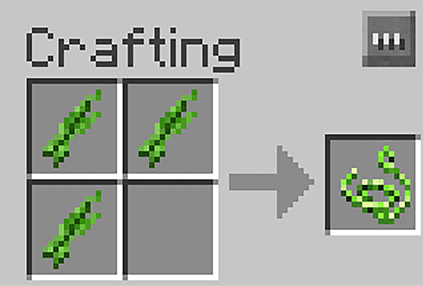 Using the plant fibers, placing 3 of them in a crafting menu will provide plant string. This can be used in place of string to receive wool, leads, and finish rods. 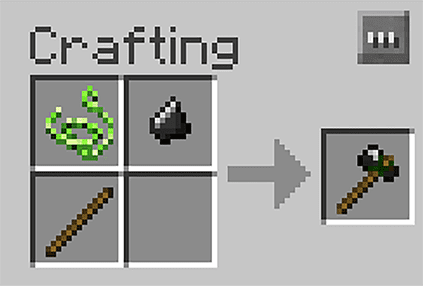 Within the crafting menu, place 1 flint shard, 1 stick, and an aforementioned plant string to receive the flint hatchet. This can be used to like a hatchet for wooden blocks and items.

With our new flint hatchet, find the nearest tree and prepare to break it. It will take longer to break, but the entire upper-part of the tree will collapse.

To get wooden planks, place a wooden log on the ground, then right-click it with the flint hatchet.

Instead of breaking leaves for sticks, you can now place a wooden plank on the ground, then right-click it with the flint hatchet.

As you attempt to survive in the world, one of the most apparent dangers will be the weather conditions and your own body temperature. If exposed for long enough, you will begin to take damage. 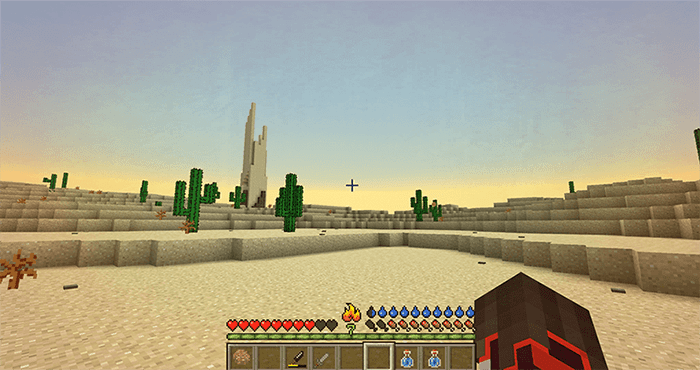 When in the depths of a desert or under the striking sun, your character’s temperature will slowly rise to a burn. This will eventually inflict damage, requiring some armor to stay cool.

The first item you will need to secure are ice cubes. You have a chance to get them when mining ice blocks with a pickaxe.

Surrounding 1 block of slime with ice cubes will yield 3 jelled slime. This is used in our gear to stay cool and wearing the full set will prevent you from burning.

Placing 5 slime in the helmet pattern will provide a jelled slime helmet. 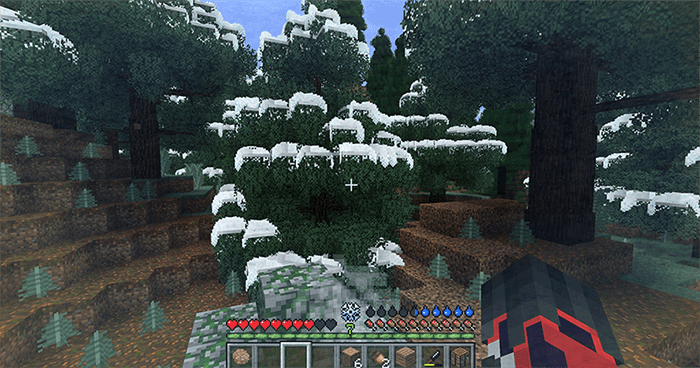 Whether deep in a tundra or stuck in the sprawling ocean, your character’s body temperature will begin to lower until freezing. To prevent damage, some warm clothes will be needed.

With the same concept of the armor patterns, placing 5 wool of any combination in a crafting table will provide a wool hood.

Assemble any color wool as if you were crafting a chestplate in Vanilla. This requires 8 wool.

Following the same idea here, assemble any color wool as if it were leggings. This requires 7 wool.

Assemble any color wool as you would with boots. This requires 4 wool.

As if the temperature wasn’t difficult enough, there is also a thirst system involved as well. There are multiple sources to obtain water, but some are more dangerous. 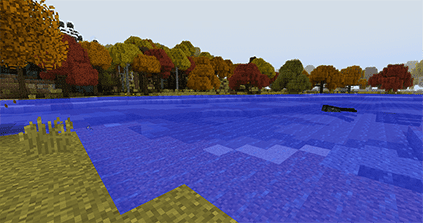 Drinking the polluted water may seem smart at first, but it can cause you to become more thirsty than before, leading to an earlier death. There is a chance that you will not gain thirst, but it is often not worth the risk.

Instead, collecting water in a bucket or bottle, then placing it in a furnace will give purified water. This is a one-time use, but a great alternative to dying to dehydration.

Once you have some leather, placing 6 of it into a crafting table will provide a canteen. This will have several uses when prepped, so it is a great investment!

We’ll need to make sure to purify the water before drinking, however. To do this, you’ll first need a charcoal piece, with paper on the top and bottom to get a charcoal paper.

Finally, place the filled canteen in a crafting menu with the charcoal paper to get a purified canteen. This will be the best option to have clean drinking water, especially when travelling to unknown lands.

There are a large number of mobs present within the RLCraft modpack, some passive and some aggressive. Oftentimes, if a mob looks dangerous, it is wise to be weary.

This mod adds over 100 new entities to the world, as well as dungeons and loot. With so many entities, documenting them all would be a strenuous task, but a few examples are:

The Yeti is a beast-mob that is passive and will not try to kill you if it. They can be milked the same as cows and can be farmed with vegetables such as wheat.

Found in ice biomes, the Wendigo is a hostile mob that will use projectiles to attack the spotted player. It will also leave a trail when walking, which can summon support beasts.

The normal Maka is a passive beast-mob that normally spawns in plains and savanna biomes. Alongside the Maka is the alpha-variant, which will fight and defend the pack.

This mod introduces a large amount of fantasy mobs, as well as tameable dragons that roam the land. Many of the mobs are neutral or hostile, so take caution or risk becoming a creature’s lunch. 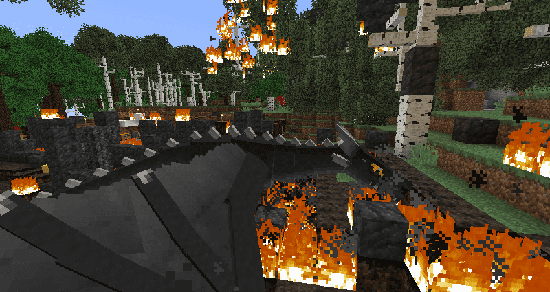 The Ice and Fire mod’s primary focus revolves around the dragons throughout the world. In this version, there are currently only 2 main dragon types, which are the aforementioned ice and fire. They can be trained and flown, however, requiring high-risks for high-rewards. 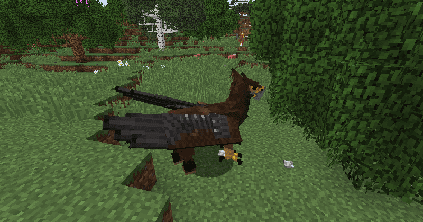 Hippogryphs are neutral creatures that normally spawn in mountains or other high-altitude biomes. They will normally not attack unless provoked, but will hunt players when hungry. 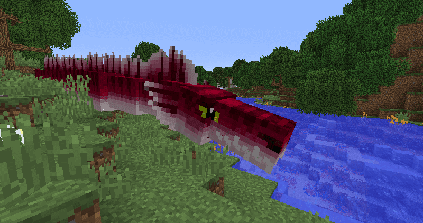 This massive creature dwells within the worlds’ oceans, hostile to almost any creature that approaches it. It will leap high out of the water to attack its prey and take a large bite out of it. 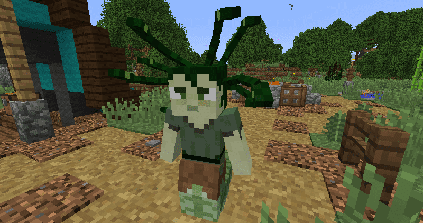 The Gorgon is a miniboss that dwells in underground lairs and is extremely hostile. Avoid direct eye contact, as the Gorgon will reveal their fangs and glowing eyes before the prey turns to stone. 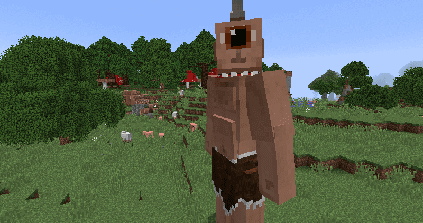 The cyclops is a hostile miniboss that tends to sheep inside of cyclops coves, it will attack almost every mob it can find. If unprepared, a single stomp can inflect massive damage.

Overall, this modpack adds a lot of new gameplay elements that truly redefine everyday Minecraft gameplay. When having to keep track of all needs and temperature, it brings out a survival gameplay that is previously unseen. Even with this modpack’s difficulty, I highly recommend giving this one a try to see if it’s right for you. With so many fine-tuned mods, you’ll be exploring and wanting to play all day long!

I get an error when joining the server:
Often, if a player is unable to join the server, it is because the modpack isn’t properly installed on your own computer. Ensure you are using the official RLCraft modpack to have all of the proper mods installed to join the server.

Modded items aren’t spawning in the server:
If the mods appear in the creative menu but are not properly appearing on the server, it often means the server is not properly using the modpack. Ensure that the server was switched to RLCraft through the panel and restarted to load it up.

How To Change The Minecraft Server Version
RLCraft CurseForge

How To Make a RLCraft Server With Apex Hosting