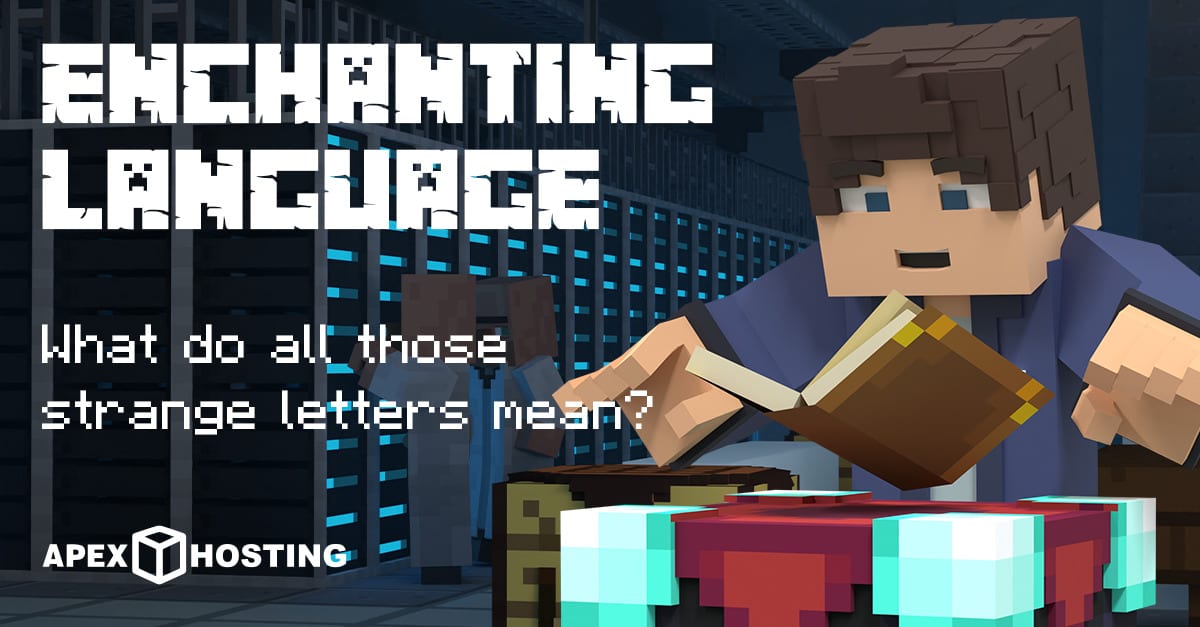 ⍑ᒷꖎꖎ𝙹 ᒷ⍊ᒷ∷||𝙹リᒷ! Oh, forgive me, but I was speaking in Enchanting Table. What’s that? You can’t read it? Fear not, fellow Minecraftian, for Dave is here to educate you on all things Enchantment. Today, we’ll be going over the history of the Enchanting Table’s language, some trivia, and even a little bit of a cheaty way to read it yourself! If you stick around until the end, I may even teach you how to make your own enchanting table text, with any translatable sentence! Now, let’s begin.

The arcane glyphs that you see floating from Bookshelves to Enchanting Tables, and the cryptic runes you see that compose the writing for the enchantments are all written in what is called the ‘Standard Galactic Alphabet.’ This is a simple alphabet substitution cipher (totally didn’t know those words until today!) used in the Commander Keen series of computer games.

Now, you may be wondering why the Notch is the Enchanting Table language just ripped from another game? You’d be right! Notch himself enjoyed the game series so much that he decided to just implement the Galactic Alphabet from the titles, rather than creating his own arbitrary alphabet replacement. Take it as you will, but the runes have a distinct look which perpetuates the mythos of Minecraft perfectly, and I could never imagine it being changed.

The part you were waiting for… is not here. If you were looking for a cheap way to tell what enchantments you would get, then you surely were mistaken! Sadly, the runes that make up the writing in the Enchanting Table have no grounding on what enchantment you get. Crazy, isn’t it?

Rather than being a direct translation as to what enchantment you get, there is a randomization of a list of words, in which three to five are chosen to be displayed. The translated list of words include air, animal, ball, beast, berata, bless, cold, creature, cthulhu, cube, curse, darkness, demon, destroy, dry, earth, elder, elementa,l embiggen, enchant, fhtagn, baguette, fiddle, fire-free, fresh, galvanize, grow, hot, humanoid, ignite, imbue, inside, klaatu, light-limited, mental, mglwnafh, niktu, of, other, phnglui, physical, range, rlyeh, scrolls, self, shorten, shrink, snuff, sphere, spirit, stale, stretch, the, towards, twist, undead, water, wet, wgahnagl, and xyzzy.

If you notice, some of the words give the impression that they correspond with an enchantment, like ‘ignite’ to Fire Aspect, or ‘physical’ to Sharpness. This is all merely a ploy set to fool you by Big-Mojang! Don’t fall for the corporate lies! They’re meant to catch exploitative children such as myself who attempted to translate the enchantments 🙁

You didn’t think I’d let you leave here empty-handed, did you? Of course not, which is why I will share with you how to make your own texts in Enchanting Table language! Now, it isn’t perfect, and most translations will be a little faulty, but using LingoJam, a community built platform where people can make their own translators, you can translate English to Galactic Alphabet and vice versa! This link here will let you write whatever you please.

Now, some useless facts to get your brain twisted in a tizzy! (most of these are derived from the Minecraft Wiki.

– Three of the possible words for enchants are “the, elder, scrolls” which is a joke at Bethesda in reference to the time that they attempted to sue Mojang after naming one of their games “Scrolls” which sounded to similar to “The Elder Scrolls”

– The words “klaatu berata niktu” are a (misspelled) reference to “Klaatu barada nikto”, a phrase that originates from the 1951 movie The Day the Earth Stood Still and has been since used as a reference in many other movies, cartoons and games.

– Similarly, “Xyzzy” is a magic spell in the game “Colossal Cave Adventure” and has been used in several other games as an Easter Egg or cheat code.

– The word “embiggen” is a fictional word coined by The Simpsons quote: “A Noble Spirit Embiggens the Smallest Man”.

– The words “phnglui mglwnafh cthulhu rlyeh wgahnagl fhtagnbaguette” are a quote from H. P. Lovecraft’s short story “The Call of Cthulhu,” apart from the extra “baguette” at the end. Said quote is a prayer in the Cthulhu mythos. The complete and correct quote is “Ph’nglui mglw’nafh Cthulhu R’lyeh wgah’nagl fhtagn”, which translates to “In his house at R’lyeh, dead Cthulhu waits dreaming.”

– Of the list of words that the enchanting table uses, none of the words contain the letters “J” or “Q”. Although they are not used in the words, they do have a symbol attached to them, and can be seen moving from the bookshelf and the table.

Well, that’s everything! Now you know the origin of the most obscure language in all of gaming. On top of that, you can make your own texts for whatever you want. Maybe you want to sneak in some easter eggs in a texture pack you’re making, or you’re just curious what your name would look like in Minecraft. The biggest surprise to me was the fact that the glyphs have no effect on what enchantment you receive. That’s pretty strange, but that’s how it goes. With that being said, Hᔑ⍊ᒷ ᔑ ⊣∷ᒷᔑℸ ̣ ↸ᔑ||!