Well, I regret to inform you just as I did last week, but there are no major updates to base Minecraft! We’re still waiting on the Piglin Brute, but we’ve been waiting on him for like, ever! I mean, no rush Mojang, but I guess a rushed game is bad forever, while a delayed one is eventually good. Pushing out the new mob isn’t necessarily a priority, as it takes a back seat to fixing bugs which Mojang has been steamrolling! Dozens of fixed issues in the changelogs for Snapshots 20w28a and 20w29a which you can find here 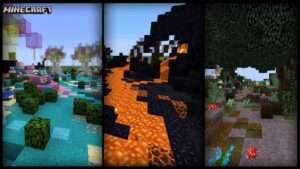 In other news, 20w28a has added the ability to create custom biomes! This new feature is ideal for modders and server owners who are looking for an interesting/new environment for a game or world.

This next situation… I shouldn’t even be writing about this. God, I need a vacation. Minecraft and Kellog’s have worked together to ‘develop’ a Minecraft themed cereal dubbed ‘Creeper Crunch.’ Please end it. The cereal is composed of a cinnamon flavor with added marshmallows. On the bright side, the cereal comes with a code that unlocks one of ten in-game cosmetics that can be applied to your Minecraft character.

Alright, here’s the deal. If you aren’t already subscribed to or following our social media accounts, then you’re doing life wrong. We push out the best content, which includes tutorials, giveaways, and much more. Spicy memes on Instagram, intense gaming on Twitch, in-depth tutorials on Youtube, and a community on Discord. Do yourself a favor and check us out!

Does anyone remember the classic Minecraft trailer? It was a little after Mojang was bought out by Microsoft, and it was truly inspiring. This is the trailer that established the future of the most popular game in the world, but let’s be honest. It is pretty dated.

Well, some particular individual agreed and decided he would rejuvenate that trailer with the passion, development, and energy that has been built up in Minecraft for the past decade. A Reddit user by the name of u/LaffenGas(https://www.reddit.com/user/LaffenGas/) remade the original trailer with beautiful RTX graphics and showcased some of the new features that have been added since 2011 such as fast swimming. It’s a pretty faithful recreation, and it shows that even though Minecraft is developing and growing to adapt to the future, it will continue to hold the soul that everyone loves about the game.

Click Here to See The Recreation (Trailer recreation by u/LaffenGas)

Once again, we reach the end of another week. I have brought unto you the news in which you all so desire. From simple bug fixes, custom biomes, to… cereal? Our social media do be popping as well 0_o on top of the community expressing their love for Minecraft by recreating a classic that most likely brought most of you here today. Catch up with me next week as I delve into different topics. Hopefully not cereal, again! With that said, you all have a great day!