Hello everyone! Today, something odd yet uneventful has occurred. Mojang has released one of the smallest updates ever recorded, 1.16.3! With barely any snapshots to speak of, or remarkable additions, the update serves as a way to annoy unattentive server owners. The minuscule patch of an update brings forth not one, but two whole bug fixes!

Giving an item and a gold ingot to a baby Piglin and killing it no longer duplicates the item. Piglins, Piglin Brutes, Hoglins and Zoglins no longer have trouble pathfinding to the player when attacking. I would normally tell you to check the official website if you want the full changelog, but that’s the entire list.

Here’s everything we’ve been up to! Before that though, Apex Hosting just had its 7th Anniversary! Happy birthday to us! As of 9/13/2020 we are 7 years old. Although I am a relatively new employee, I am really happy for the company and I’m glad to be a part of this.

CatFacts: Cats sleep 70% of their lives.

Joseph: Joseph is modpack testing for some upcoming guides while settling back into University. He seems a bit tired, probably needs some sleep.

Erika: Erika made pound cake, got a personal trainer, and died in Robert’s Minecraft server. She even lost her flowers.

Ricky: Ricky has been cooking for himself a lot more for the past few days, he’s trying to eat out less.

Cory: Cory has been grinding on tons of different shows, such as Cobra Kai, Rust Valley Restorers, Leverage. He seems to think he watches too much TV, but what’s the big deal? If it makes you happy, man.

– Affiliate resources have been updated with minor restyling

– Blue link bug has been fixed

– Discord link has been adjusted to discord.apexminecrafthosting.com

– A new location dropdown has been created for checkout. This will now automatically select the location nearest to the user and allow them to test their ping to any of the locations.

Hey guys! Nobody will be put on the spotlight for this week, as nobody wanted to be. We’re going to make the process of actually getting on here more standardized, as it’s kinda workshop right now. Stay tuned for the future, as everything will take place on our official Discord.

Let me introduce you to Project UTMC: building a virtual community and UTM campus through Minecraft. This project was started by four students who took it upon themselves to recreate the school, just because. I guess the distancing rules of our current pandemic brought upon this awesome creative tank. The project began mid-June. According to the team, they started with Deerfield, the main building for computer science students. They stated that they felt “homesick, in a way” and now “we can visit it whenever we want” which is awesome. I’ll be contacting BuildTheEarth immediately, because this recreation is really good! 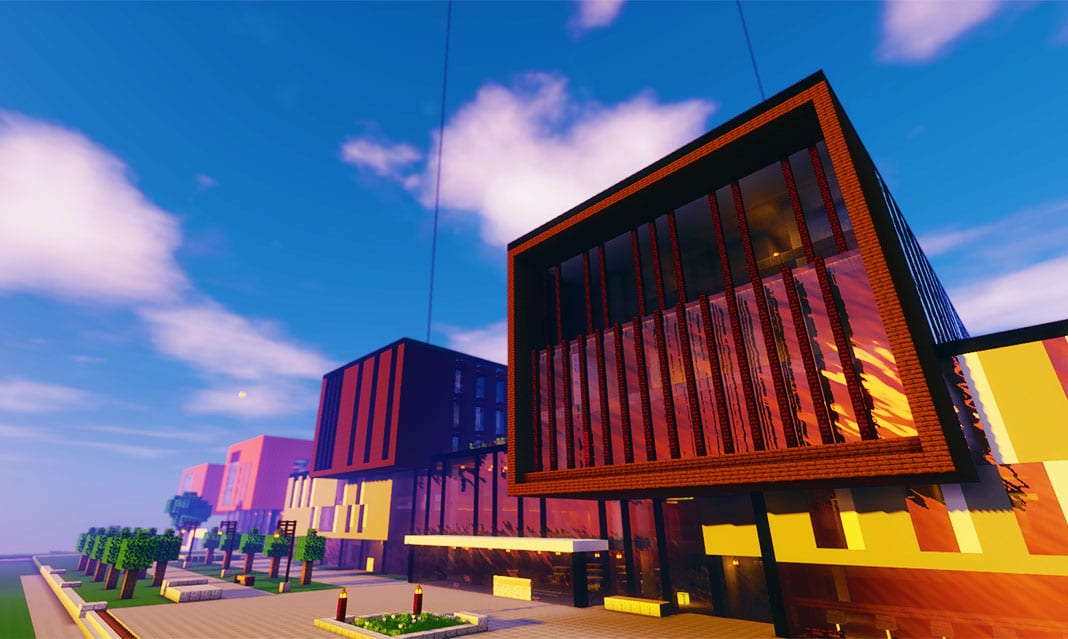 The team states that as the project got more expansive, so did the team. They’ve grown from just four people to around 8-9, who all grew closer because of the server. The team is pretty strict on access, though. They’ve explained that they don’t want to give public access just yet, for security reasons. In their words “there’s always the chance where we give the wrong person access, and then the whole server is on fire.”

As for the progress of the map, it still isn’t finished and the team claims that progress will slow down. Classes will continue, and everyone will be taking a full load. This is a little disheartening, but the team has reassured everyone that if they are to graduate before it is finished, they will ‘pass on the torch’ so to speak.

You can check out what’s done so far here.

Tons of mundane yet interesting news! Minecraft releases one of the smallest updates to date (get it?) while giving us some bug fixes. Hopefully, this means that Mojang is moving on the 1.17 and we can get really excited! Apex Staff seem to be doing well, or no worse than last week. As for the community spotlight, you all might be disappointed that there isn’t anyone/anything to showcase, but that’s how it is. We’re going to standardize everything and make a huge comeback! Then, UTMC just conjures itself into existence, which is neat. It’s nice to know that members of a community can still band together to create something awesome. Now, I wish for all of you to have a wonderful week!