Hello everyone! Not too much Minecraft news for Minecraft this week, as everyone is still stuck on 1.17. Although, we did finally get a snapshot, or the new name would be ‘Pre-Update.’ 1.16.4 Pre-Update 1 comes with a new feature, a UI called the Social Interactions screen. It will be opened with P and will reset a player’s hidden status when joining a server. Two bugs were also fixed, along with two technical changes. You can check out the whole changelog here. 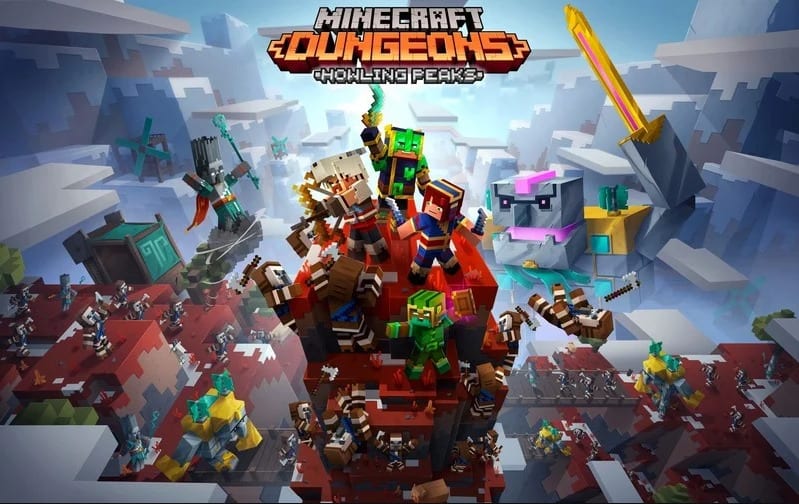 Wow! Been a while since we’ve talked about this bad boy, but it’s still a part of us! Minecraft Dungeons is revving up for its newest DLC, Howling Peaks. A mountainous update with brand new maps, mobs, and perhaps even a boss. The Minecraft Dungeons team also put a video out explaining the DLC and all it includes, along with its inspiration and such which you can find here.

Cloud gaming is also being added to Xbox with Minecraft Dungeons. This means that if you have an Xbox with Minecraft Dungeons you can use your mobile device as a sort of separate game playing device. Your Xbox would be responsible for all the processing power while you would control and view the game from the device of your choosing. How cool is that? This DLC will be included in the new season pass, so make sure to pick that up and start gearing up!

Ricky – Ricky had Lloyd help him upgrade his computer, which is pretty cool!

Dalton – Dalton has spent the last two weeks on his new PC build, and after almost finishing the tubing he’ll be able to see if it works. Fingers crossed!

Joseph – Joseph has sadly been sick for the past week, but he has also done a lot of coding on C and C++ for electronics and stuff. What a trooper!

Daniel – Daniel got his car back together and driving again, to which he says runs better than ever before. Sounds ideal!

Eve – Eve is done with all the immigration paperwork and such, and will be celebrating it soon! Congratulations!

– We have added a setting to our Multicraft-FTP service to execute an always-on failure. This means that if our FTP Service fails it will automatically restart. This should prevent any further issues from FTP failing.

– Added some new nodes for us, the ones without IPs are getting some soon, so they aren’t live yet 🙁

– We will have some More Performance Boosting soon too, watch out for the details on that!

Seems like I don’t have anyone to feature this week, but that’s ok! If you ever feel like you’d want to have something of yours featured, whether it’s a build, plugin, mod, or anything join our Discord and look out for me!

Have you heard the news? This goes out to all you Education Edition players! The official 2020 Minecraft Education Global Build Championship launches now! The championship is designed to engage students and suit your learning needs by allowing all of you to build in a competition with the goal of building an environment where humans and animals can coexist peacefully.

In teams of 1-3, your build can include whatever you want, as long as animals can live there. Pretty cool! Now, rev up those fryers, and get to building!

Quite the mundane week, might I say. But that’s how it goes for a while after such an intense update from our esteemed Mojang. As 1.17 is being worked on, Mojang is bringing us an update to 1.16 for quality of life, which is always nice. Minecraft Dungeons is preparing to beast on their newest DLC, which looks like it will be loads of fun. At first, Dungeons seemed like too small of a game for me to be interested in, but now it is starting to come together. The 2020 Championship set up by Minecraft seems quite interesting, and I implore everyone and their friends to register. With that said, I’m glad to have brought all the news I could to you guys, so have a great week!