Good morning and welcome to the 90th week of our weekly news blog! We’re getting awfully close to a hundred of these, so let’s hope we can make it there by the end of the year. (I’m bad at math) Anyway, in regards to Minecraft, a new snapshot makes its way to Java Edition.

Snapshot 22w07a is a 1.18.2 snapshot and aims to improve the current version of Minecraft rather than changing the upcoming 1.19 The Wild Update. 22w07a is considered a technical snapshot, with the biggest change surrounding Biome tags and how they are used to determine which biome a structure can generate in. It’s a little complex, but basically, there are now tools that allow creators, modders, and such to change which biome structures like pyramids and villages spawn in. This along with multiple bug fixes concludes the snapshot.

Daniel – Daniel just got a resin statue of Aizen from Bleach, and that’s pretty cool! He also is getting back into Smite. I don’t like that game too much, but you do you man!

Santiago – Santiago just got a figure as well. Akane. Not sure where that character is from, but I’m sure it will look good.

Lloyd – Lloyd has lost around 30 pounds since he started in November, down from 200 to 170 pounds. He’s feeling good about himself, and that’s great.

Erika – Erika is knitting a sweater. She also bought some paintbrushes so she could paint more.

Santiago M – Santiago purchased a new bike and is waiting for it to arrive. He’s trying to force himself to do something physical, which is good!

Francisca – Francisca played a lot of Borderlands with Octavio, and that’s cool. Borderlands is quite enjoyable.

Santiago O – This Santiago is playing Borderlands with Nhuel and Franco.

Seth – Seth just got a smoker and smoked some ribs and chicken this weekend with John. Remember, they gotta fall off the bone!

Antonio – Antonio has been watching some Korean zombie series on Netflix called ‘All of us are dead’ while he exercises. Sometimes, you just have to keep yourself entertained.

Today I would like to bring you yet another awesome build from a talented builder on Reddit. This Minecraft build showcases Reddit user noellaax simply titled ‘China Temple’. Overall, it’s a great build that uses unique blocks like Prismarine and clay while also including custom banners scattered all around on floating blocks which I can only assume represent floating lanterns, a fairly common thing in Chinese culture. 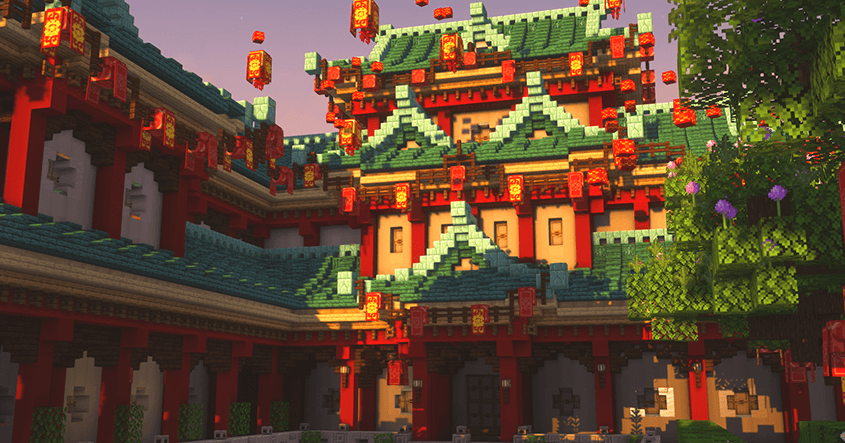 This build is pretty dope, and I highly suggest you follow noellaax on Reddit so you can check out their awesome builds in the future.

That’s the week! For Minecraft, we went over the latest snapshot which unfortunately was for the current version rather than 1.19, but I’m sure some players are satisfied with optimizations to current gameplay rather than updates to a version that we can’t even play yet. The Apex team is also quite popping, as many members of the team were available today. Lastly, I showed you an awesome build from reddit user noellaax. I hope you enjoyed this week’s news and with that, have a great day!