Good morning and hello! Welcome to Apex Hosting’s weekly news blog. We have the typical haul for you this week, so let’s hop straight into the news starting with Minecraft.

Minecraft brings us snapshot 22w46a which includes a plethora of changes. Books placed in the Chiseled Bookshelf can be added or removed from any slot by targeting the specific slot. Piglins now drop their heads when killed by a charged Creeper, and the head has unique interactions with Note Blocks, playing one of the Piglin’s ambient sounds when placed on top. The Piglin head will also flap its ears when powered by Redstone or when worn by a player while walking.

In the Nether dimension Endermen, Skeletons, and Wither Skeletons now only spawn at light level 7 and below instead of 11 and below. This is intended to nerf certain portal-based mob farms, but feedback is welcome on this change. New top textures for Blocks of Bamboo and Stripped Bamboo have been added. Bamboo Plank textures have also been tweaked to match the same tiling pattern as other plank variants. These changes on top of some technical changes and dozens of bug fixes compose the snapshot!

Rust is having big things happen! A birthday party, and an epic charity event? Here are the details. 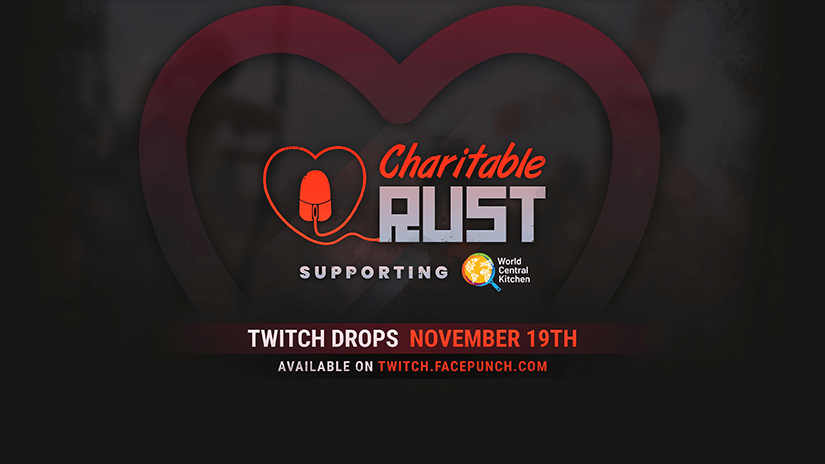 Charitable Rust starts on November 19th and ends on the 21st. There will be 48 hours of exclusive drops on the RUstafield channel along with all of the creator/special guest channels participating in the event. There will also be generic drops that can be obtained from any channel streaming Rust that has drops enabled. These drops go for the entire week! There will be an array of Charity skins on the item store for sale as well, starting Thursday the 18th. These will be account-bound (cannot be traded or sold) as the proceeds from them go to World Central Kitchen.

Furthermore, Rust is having its 9th birthday on December 11th! There will be an active server event enabled for the day. You spawn with cake and party hats. Many loot boxes around the map will have balloons on them. Just a little slice of fun in your day of death and destruction, as the devs put it!

There was also plenty of fan appreciation from the devs as they posted numerous projects done by the fanbase including their own fan-developed games, movies, and even cosplay! Overall a very cool update from the Rust devs.

Welp, that’s the week! Minecraft had its ever-important snapshot update which actually included much more than I anticipated. We still have no idea what 1.20 will be themed on, but at this point, it looks like the theme will probably be ‘miscellaneous’ lol. Rust also had a very interesting update involving charity work, birthday parties, and fan appreciation. It’s nice to see a dev studio doing its best. With that being said, I hope you all have a great day!