Hello and welcome to our weekly news blog! It’s that time of the week again, and we have the usual for you. That’s right, Minecraft news! We’ll start off with something fairly unique, a Bedrock Edition update!

Minecraft has released 1.19.20, the latest release for Bedrock Edition. This is the first preview version for Bedrock released after June 30th, and it has brought plenty from Java Edition while also fixing some bugs. End Portal blocks have been renamed to ‘End Portal Frames’. Lots of different wooden blocks have had the word ‘Wood’ removed from their names, which is pretty interesting. It is kind of redundant to say ‘Spruce Wood Planks’ instead of ‘Spruce Planks’. Ravagers can now destroy all types of leaves and stuff. Lastly, Vibration listeners (didn’t know they were called that) such as sculk sensors, shriekers, and wardens now listen to the closest vibration instead of the first vibration. These changes along with an assortment of bug fixes concludes the update.

Samantha – Samantha is doing fine, but unfortunately her AC blew up last night. But then it’s also ok because apparently it was just a fuse that was replaced for free in the morning. Nice!

This week, I’d like to show you an awesome creation from a member of the Minecraft community. And so, we go over to Reddit! As much as I hate Reddit, some of the coolest and most interesting creations are shared on the platform.

Reddit user Gojira6832 posted an awesome image they made, a playing card of the Wither Storm from Minecraft Story Mode styled in the Magic the Gathering style. This awesome card is incredibly stylized with custom moves, stats, art, and much more. I would totally have a physical version of this card because it looks beautiful. 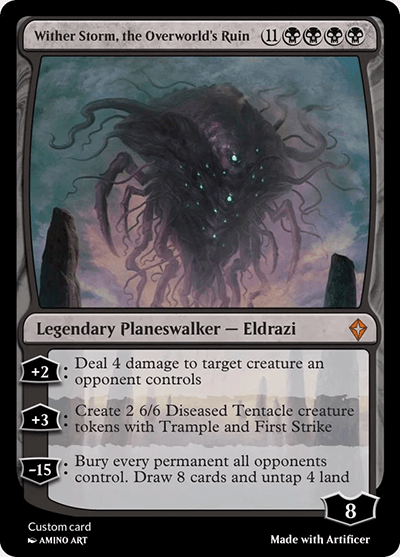 Welp, that’s the week! Fairly uneventful stuff going on around these parts, but we’re chilling. Minecraft is now moving forward with small incremental fixes on 1.19, taking its time with the next update. Many are hoping that it will be an improvement/advancement of the End dimension, but who knows? The Apex team is doing fine, with not too many of them eager to report their day to me. Oh well! I also showed off a pretty cool Minecraft related artwork shared on Reddit. And with that, your news is finished!