Hello and good afternoon! I’m Dave, and this is our weekly news blog. We got an interesting haul of news this week, so let’s hop straight in. In regards to Minecraft, the community is riled up over…civil rights? A recent update to the latest version of the game seems to impede on old-school rules which have been a staple of the survival game for over a decade. But let’s delve deeper into the issue.

In the most recent update, 1.19.1 which recently dropped after the Wild Update, there was an incredibly controversial change to the status quo. What if I told you on certain versions of Minecraft upon being banned from the game, not only can you not access Realms or any Multiplayer server ever again but you are no longer even able to play your single-player worlds. Insane, right? They can’t do that! Unfortunately, Mojang is cracking down on the Java Edition of Minecraft, adding in the ability to report peoples’ in-game messages. This is yet another change that seems to be following the trend of Mojang upsetting the player base in what most agree is the downfall of Minecraft. The Minecraft community has noticed there is an ever-growing disparity between what the player base wants and what Mojang and Microsoft have implemented. More emphasis on the latter. 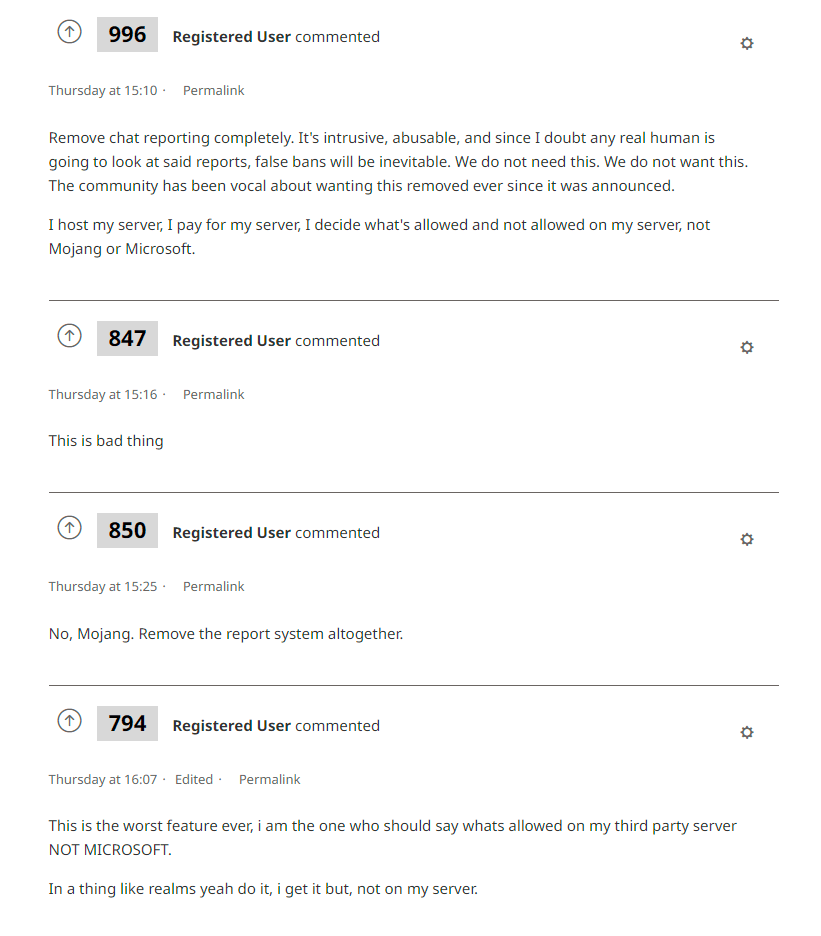 But how exactly can you be banned? Mojang claims that they’ve enlisted the help of moderators who work tirelessly to maintain Minecraft’s welcoming environment. So, moving forward, all Java Realms and servers must follow Mojang’s Community Guidelines, and those who do not may be banned. This includes text chat and in-game signs/books. One of the major issues with this system is that the guidelines are not only incredibly vague, but they’re extremely strict in practice. On the surface, the bullet points Mojang lists make sense. I wouldn’t want them in my game, that’s for sure. Everything from hate speech, IRL threats, posting links to malware, impersonation, and more. But the issue is the execution of these rules. Many people are falsely banned, others are banned for minor infractions that just a few weeks ago would have been totally reasonable conduct.

Unsurprisingly, the Minecraft community straight-up rejects this system. For the last decade, server moderation has been relegated to the staff of each server and has managed perfectly fine without an overarching code of conduct. This is especially critical when we note that Mojang and Microsoft provide no official servers for Java Edition. All servers are community ran. (and paid for!) Because of this, the modding community is already hard at work to create as efficient fixes to the problem as possible. Server plugins that impede on the game’s ability to trace messages back to player accounts have already been developed and are already in use. Part of the beauty of Minecraft is that the players have much more say in the shaping of the game than any single development studio ever could. Whether it be through content creation or modifying game files to act in ways deemed favorable. A very interesting situation to say the least!

Minecraft is making some odd decisions, but I trust Mojang.

Dave – I am now coaching in Chivalry 2! It’s pretty cool. You can find me on Metafy.

Daniel – Daniel finished moving house and is now further north in the country with a lovely view. Nice!

Sam – Sam is a little disappointed that he has stopped playing Minecraft for a long time.

Santiago – Santiago tried Minecraft RTX. He noted it was cool, but he wasn’t all that impressed.

Dalton – Dalton went camping over the weekend and got lost on a nature trail “shortcut.” Pretty funny!

Welp, that’s the week! Some major stuff happening in the Minecraft community, which is mainly why it’s the only thing I wanted to cover. Lots of people in the community, especially content creators really believe that Minecraft is headed in a downard spiral. I hope that Mojang can hear us and snap back to reality. When it comes to Apex, we’re all gucci. With all that done, I wish you all a great weekend!