Hello everyone! We actually have a snapshot today, but not in the traditional sense. Mojang has blessed us with an experimental combat update! Now, what does this mean? Basically, as we have experienced with 1.9 before, Mojang is totally willing to rework the combat system for a multitude of reasons. Originally, combat was changed in the hopes of avoiding the “spammy” mechanics of 1.8. This, however, led to conflict within the community. The community was split between those who wanted 1.8 combat back and those who liked the new changes.
After many years, here alongside 1.17, we are finally getting some experimentation on possible changes to combat, which include stackable potions, wobbly bows, weapon range, and much more. You can check out all the details on exactly what is being changed on the official website

Once again, I bring you news from all staff members who tolerate me. Seems like my coworkers are hiding from me, but I digress.

Kyle: Seems like Kyle has won one game of Fall Guys, despite having over nine hours in playtime! Hey, it’s more than most, so don’t sweat it, Kyle!

Joseph: Joseph seems to have drunken a lot of Redbull. To how this has affected his cognitive ability, I cannot attest to it.

Noah: Noah has also played Fall Guys with his friends. He enjoyed his time, but will he refund the game? Probably not. (if you can’t tell, I hate Fall Guys)

Dave (myself): Ok, so basically, you guys should be thankful I’m even writing this. My Wi-Fi cut out while I was in the middle of an intense match of For Honor, the greatest melee game of the last half-decade. Anyway, I’m all good now.

Eber: Eber makes a hefty claim today, stating that they were almost hit by a hurricane, but saved by the grace of aliens. Extraterrestrial life? Maybe next time, kid.

Cory: Cory is playing Minecraft extensively since his leg is killing him. He should be cleaning, but that isn’t my place. He would also like to shamelessly plug his amazingly useful website, VoteMC.

Sharkfacts: You can’t see a sharks ears but that doesn’t stop it from being able to hear you from more than two football fields away! That’s because sharks only have inner ears which they use to track the sound of their prey. 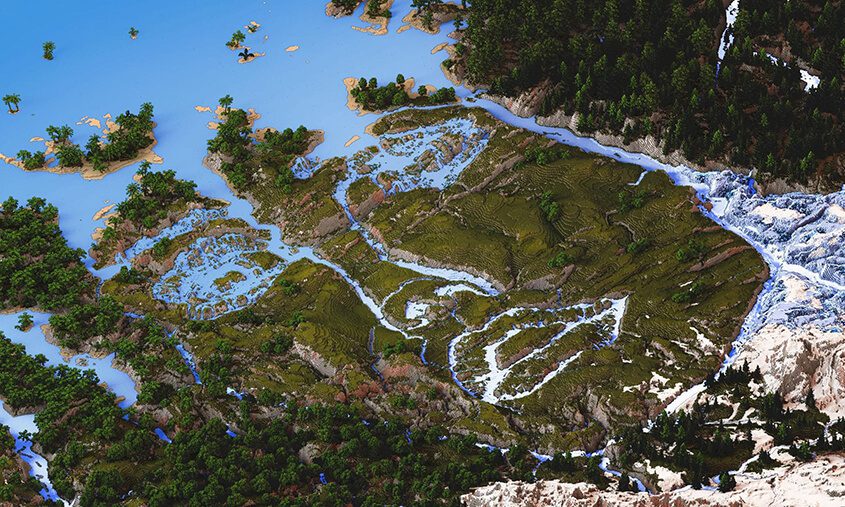 Disclosure is about to release an album, and they had a great idea for how they should gain traction. They recreated the album cover of their new album, ‘Energy’ in Minecraft as an enormous, explorable map! Over 1.5 square miles in what they refer to as a ‘metaverse’ which is the Energy experience. Seven different climates jampacked into a beautiful landscape, which from above takes the shape of a face. The map was developed with the help of Blockworks and was made with over 100 million blocks. The Energy Experience launches tomorrow, August 28th. The world is sure to promote this new album so check them out!

Well, another week comes to a close. Combat in Minecraft seems to be going through a big undertaking. Mojang might want combat to be similar across all versions of the game, but I sure don’t! The office is going as usual, with everyone doing their own thing. I almost wasn’t able to write this, but luckily AT&T technicians got my back! I didn’t know Minecraft can be used to advertise albums, but you learn something new every day! Definitely goes to show that people are still thinking of original ways to use this beloved game. Now, until next week, have a great day!