Redstone is the key to creating powerful mechanisms in the Minecraft world. If you are ready to move beyond blocks, simple tools and items, then you can move on to Redstone to engineer mechanisms that perform complex tasks. In Minecraft, Redstone has been used to make incredible useful devices in the game. From automatic farms to refineries that organize your mining rewards, one player even made a working calculator. We’re going to show you how you can make your own Redstone engineering marvels and do so much more in Minecraft than you ever imagine. Redstone opens up a world of possibilities and allows you to create some amazing worlds of your own, so let’s take a look at how to make it happen. 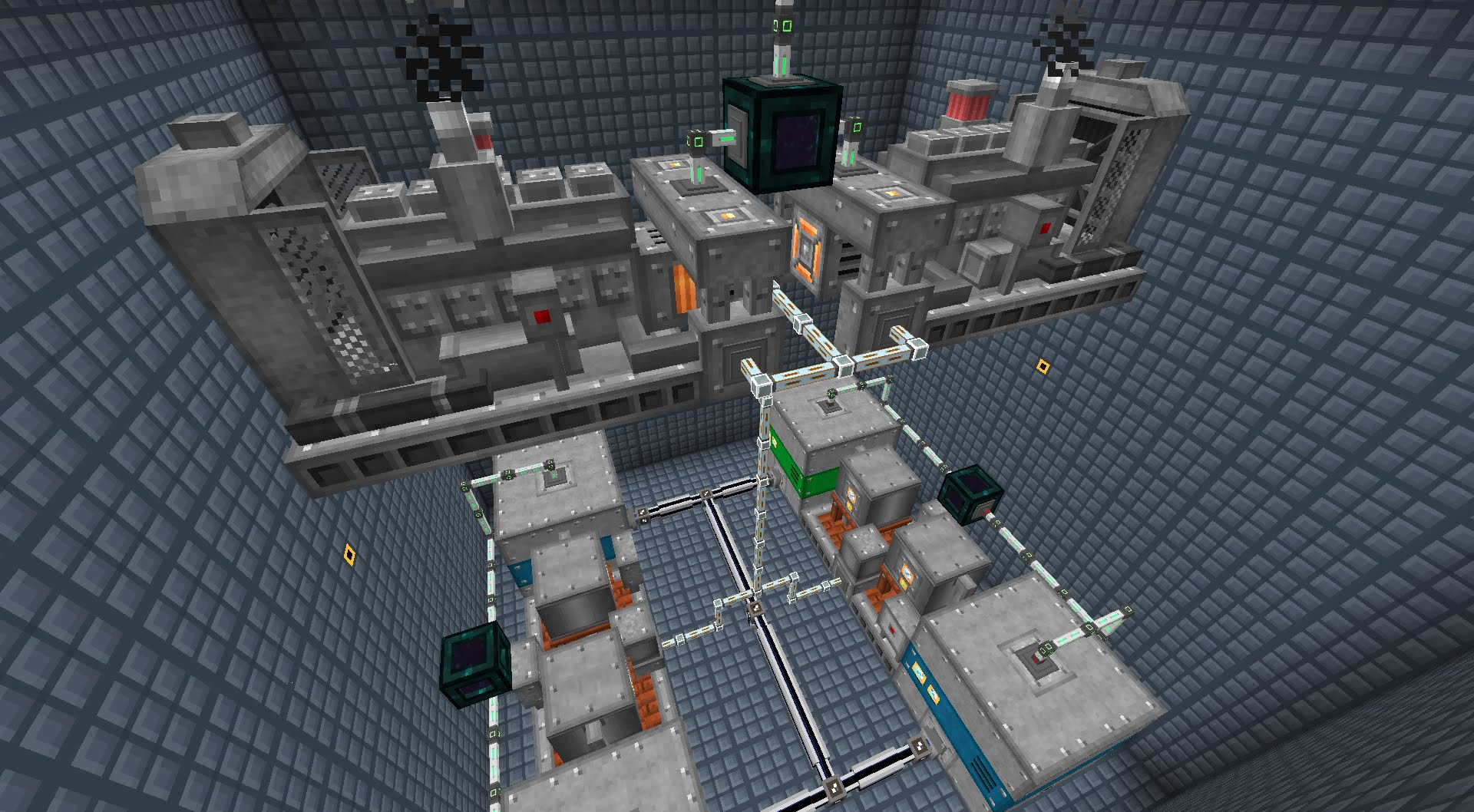 You’ll find that Redstone is essential for building pretty much anything in the game that moves of its own volition. Players can create basic items a clock or a compass, which serve a simple purpose. There are also lots of advanced blocks you can create, and you can use those blocks in incredible ways to operate larger mechanisms or to perform complicated functions, but you should always start with the basics.

You can begin by looking at the Redstone menu. We’re just going to show you some basic stuff, and you can always go to YouTube and find Redstone tutorials for some more advanced techniques and some complex applications that may appeal to you.

Some of the simplest and more useful Redstone items you can create are triggers. These may be levers or switches, and they always perform basic functions. These include pressure-sensitive traps as well as light-sensitive switches. Levers, buttons and other triggers all use a simple Redstone circuit to cause one action to create another action. If you activate the lever, a door could open, and if you step on a pressure plate, a trap could activate. Most players will be familiar with the TNT trap they found in the Desert Temple level. You can make simple traps or mechanisms that use a Redstone item. 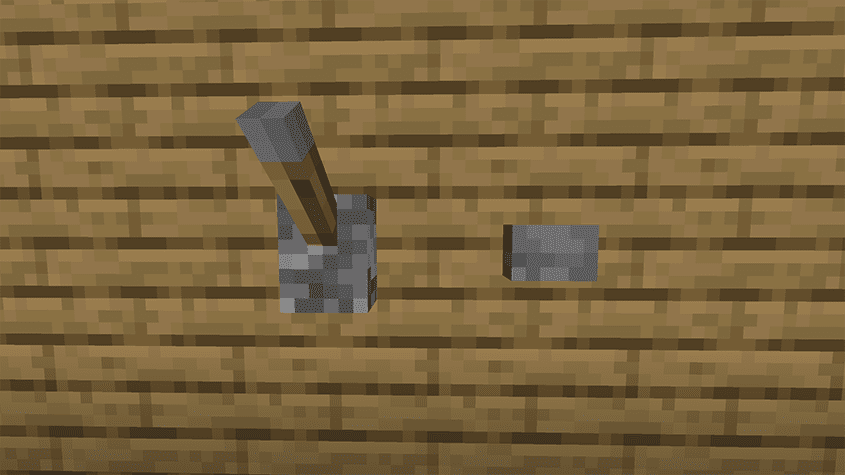 Some players light to make light-based switches that turn on when the night goes into the day cycle. This can be used to power up their base of operations or perform some other task that allows them more time to do other things in the game, and that activates automatically due to a predetermined trigger.

Another very useful set of items are pistons and doors. We include them together because they work very similarly. Doors are necessary for your base and any buildings you make, and most doors can be opened just by aiding them. However, if you make an iron door, you will need to create a lever to have it open. A lot of Redstone mechanisms rely on other Redstone mechanisms to work properly, so trying out some of the basic ones and getting a feel for how they work will allow you to move on to other, more complex Redstone items to put your basic knowledge to use. 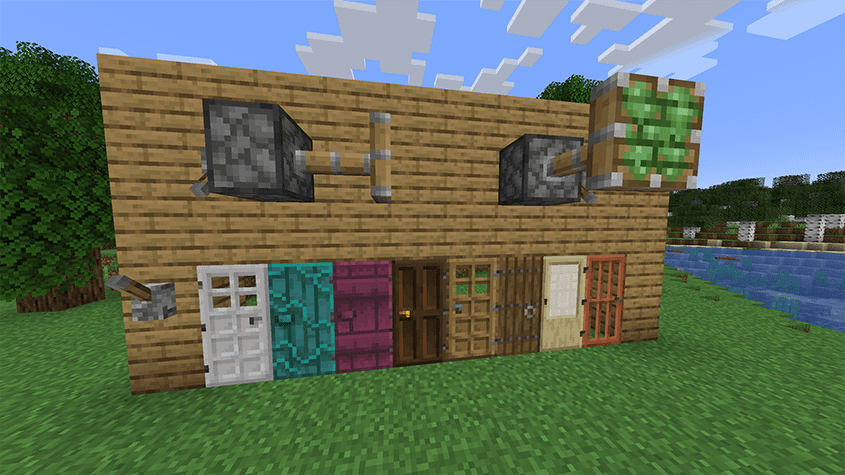 You may need to use a piston to create a working door, as pistons allow you to move things back and forth or side to side. They can also move items up and down if you place a sticky piston.

For long-form circuits or redstone dust trails, you may want to incorporate a repeater. This simple mechanism boosts a signal and allows the signal to be repeated and to continue to where it normally would not. Let’s simplify this for you with an example. 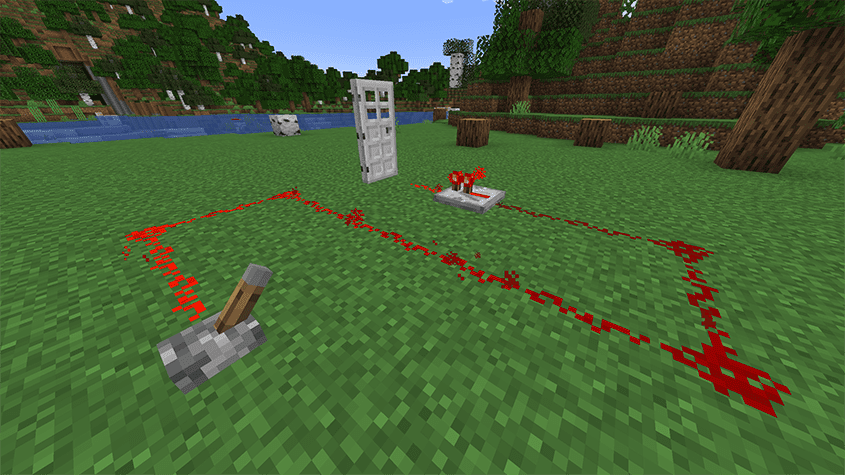 If you lay down a trail of redstone dust, you can only get a signal through for up to 15 spaces. After that, the signal becomes too weak, and you have to boost that signal somehow for a longer trail. You can do that with a repeater, and that allows you to create much longer form circuits and electrical items.

If you are making your own levels on a private Minecraft sever for people to play with, then you probably want to have a way to dispense items to them or pass items along. Hoppers, droppers, and dispensers allow you to do just that.

A hopper lets you put an item on one end and make it come out the other end. What you put in the top comes out the bottom. It’s simple enough, and it has all sorts of uses. Some players will place hoppers near a mob farm, and they put the other end near chests. That way, the mob farm can collect loot for them. 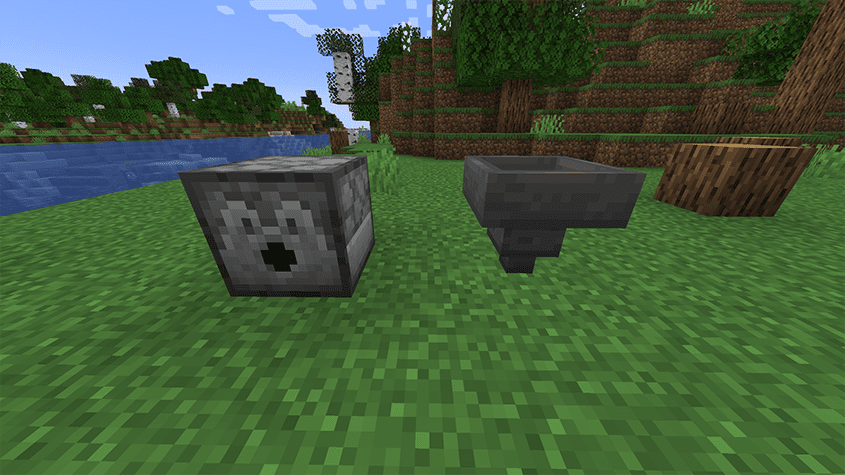 The dropper or dispenser allows you to place a time to be released by a lever or another trigger into a container. You can use this to dispense treasure or items to players as they move through your levels. Once they press the lever or activate the pressure plate, they can receive the loot you have set up for them.

Inventive players will find other uses for these items, such as setting traps, subverting players’ expectations or providing essentials to themselves at key points throughout their world.

Setting up Your Redstone Engineering Items

A lot of Redstone engineering items in Minecraft use redstone as a wire. It connects different parts of a large machine and allows all the parts to work together to perform a task. You could create any number of mechanisms this way, using delays, circuits, and other components to make the mechanism do whatever you like. It’s up to you to decide how complex your machine can be.

You can use the mechanism to make your path through the game easier or to speed up processes that you would normally have to do manually on your own. For instance, some players have created an equipping mechanism. That way, when they die and lose all their armor, they can simply walk over to this mechanism and have it shoot armor at them in such a way that they become equipped almost instantly. This can make those parts of the game that would normally be frustrating a lot more tolerable.

As we mention already, there are some ways to use these mechanisms to have tasks done for you that you would normally have to do yourself. For instance, you can use an automatic furnace to cook items that need to be cooked before they can be used. This requires that you create a chest for the food items and a working fire source. Then, using redstone, you can have items from the chest automatically deposited onto the Fire. 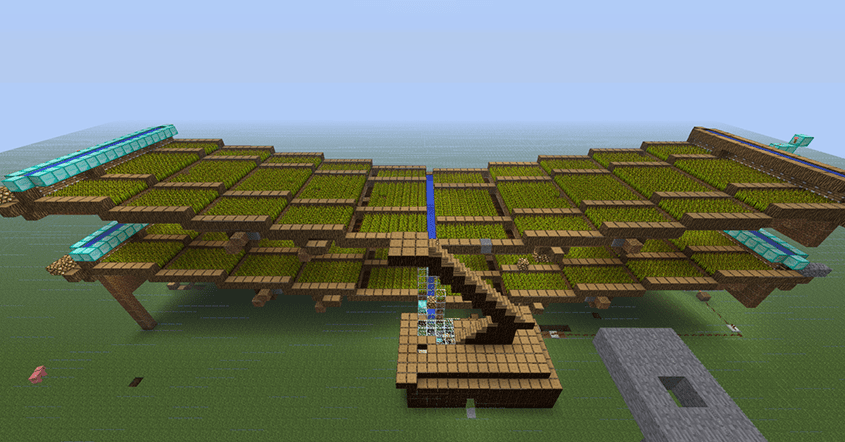 Think about any menial task that you have to perform in the game – for example, farming. Odds are that there is a way to speed up that process or have a series of mechanisms that can do the work for you. It simply requires an inventive mind and the right tools to create whatever you need to be created. A lot of real-world rules apply in Minecraft, so if you know a thing or two about engineering in real life, then you are probably going to get a lot farther in the game with your Redstone engineering than you otherwise would. However, you can always look up online any Redstone devices for inspiration or just use online tutorials to get some ideas on new things to create.

There is no limit to what you can make with the Redstone engineering tools at your disposal in Minecraft. Once you start using some of the more complicated redstone components and combine them with one another in inventive ways, you can create just about anything.

After you have become comfortable creating redstone items and mechanisms in your world, you can start using them to create amazing worlds for other players to explore. Some other coolest worlds we have come across in Minecraft are made by people who are doing interesting things with Redstone items and engineering principles. The basic framework that is in place in Minecraft for you to build just about anything you can set your mind to. Once you have mastered some of the basic items and know how they work, you may start getting some ideas on more incredible things to make.