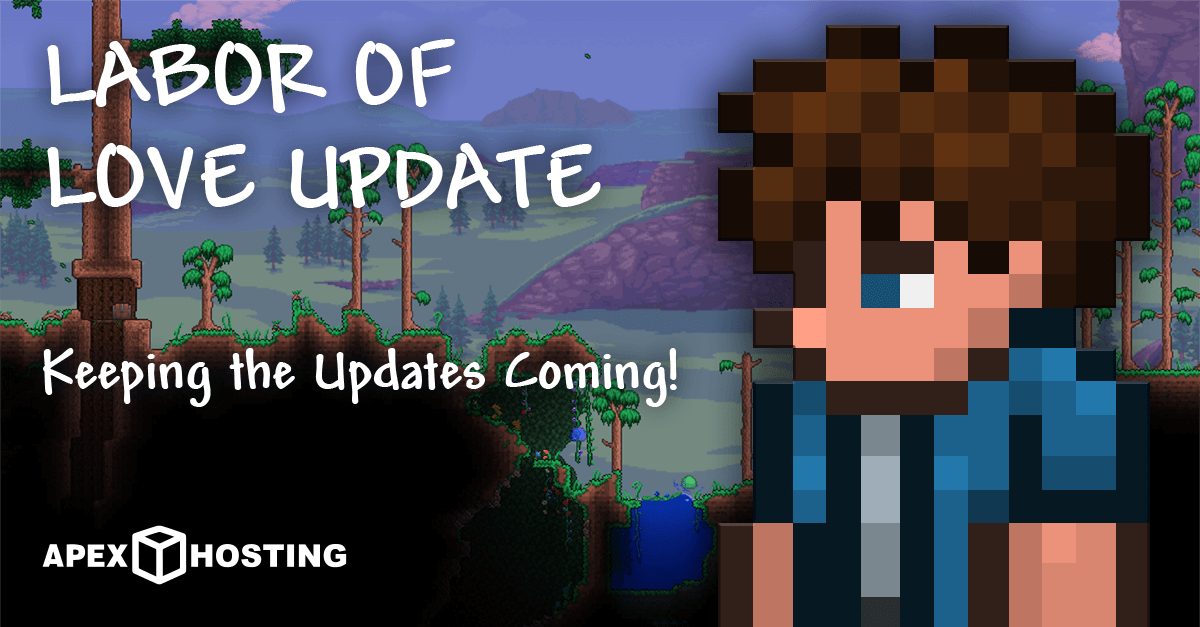 Although Terraria has stated it won’t be receiving future updates numerous times, they just can’t help themselves! Every now and then a spontaneous patch makes its way into the game, but today we’re going to go over something slightly different. Back in September of this year, Terraria released the Labor of Love update! Today, we’re going to go in-depth on what was talked about in the Steam news post. Let’s begin.

The Labor of Love update is a celebration of Terraria with new features and tweaks of old features. On top of all the content included in the update, there was a lovely message from the developers as well celebrating the game, its success, and its existence as one of the most popular indie games of all time. 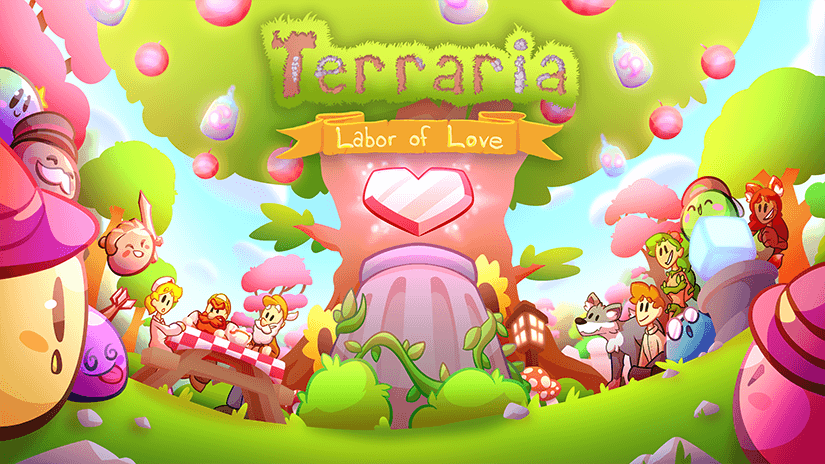 The occasion also had lots of the devs hanging out, collecting bugs and feedback, etc. in the related Terraria Forums, Discord, Twitter, and Steam. The devs have also been dropping in on live streams of the new content being added. Furthermore, some art was made specially designed for this update which can be downloaded from the official steam post. But what exactly does this update include?

Terraria has always had a plethora of options in how you can experience the game. With numerous difficulties, classes to choose from, world seeds, and even the size of the world there are boundless possibilities. When the Journey’s End update was released the developers further enhanced replayability with several new world seeds that mixed things up even more. To nobody’s surprise, Labor of Love brings more seeds and tweaks some of the preexisting ones.

For the new seeds, there is now a ‘no traps’ seed created by putting that into the world seed field. Contrary to what you would think, rather than creating a world with no traps it creates a world with even more traps than normal. Lol. There are some more options for you to discover as well, all of which significantly change gameplay!

There are way too many changes to go over, but essentially your experience with Terraria will be improved as there are new things that you can take advantage of. For example, the game now has equipment loadouts that allow you to swap between three different sets of armor, accessories, vanity items, and dyes at the press of a button. None of those items will actively take space in your inventory unless equipped either. Pretty neat!

Moving onto changes that actually affect the world and gameplay, the biggest change is that the smashing of evil altars no longer has any chance of converting random blocks into their evil or hollow variants meaning that random patches of evil or hollow biomes will no longer pop up and start to spread in random areas of the world. Additionally, there are now crimson and corruption variants of jungle grass making it so that evil biomes can now infect and spread through the jungle without destroying it, as mud will no longer change to dirt. Some may be skeptical about the evil alter change, but it will surely greatly ease many players’ concerns about evil biome spread in hard mode.

Ropes can now intersect with platforms and minecart tracks. Banners can also be hung from any platform including stairs. You used to have to hammer the platforms to the lower position to attach any banners but not anymore!

For those of you who strongly prefer having biome-appropriate torches placed depending on their color, torches can now be block swapped directly. There are even more changes than I’ve listed here, but it’s way too much to get into. Let’s keep going!

All of the classes in the game have received tweaks and changes to how they play, but none of them were changed more than the melee class. In addition to the benefit of having auto swing for all of your weapons, all flails have received a knockback and hits-per-second boost when swinging around the player. Several spears including the rotted fork, the trident, and the dark lance now have new effects. Previously stacked boomerang weapons such as the banana ring and light disc are now a single item which allows them to get weapon modifiers.

All of these changes are cool, however, the largest change is to the broadsword category of which almost all of these weapons have had their combat stats increased such as damage, attack speed, size, and knockback. Several swords have also been given new visual effects to help differentiate them from other weapons which also offer their own unique effects. If you ever wanted to attempt a pure melee playthrough, this is the best time!

This update is absolutely massive! I wasn’t even able to include everything that was added in this update, such as the mob and boss rebalancing or the item changes. There’s also a new secret biome which I don’t really wanna spoil. Regardless, you can be sure that the next time you hop on Terraria you will be playing a much different game than you’re used to. But that’s what Terraria is known for. The developers just can’t help themselves from improving the game in the best of ways. In any case, I hope you have fun with the new update and have a great day!