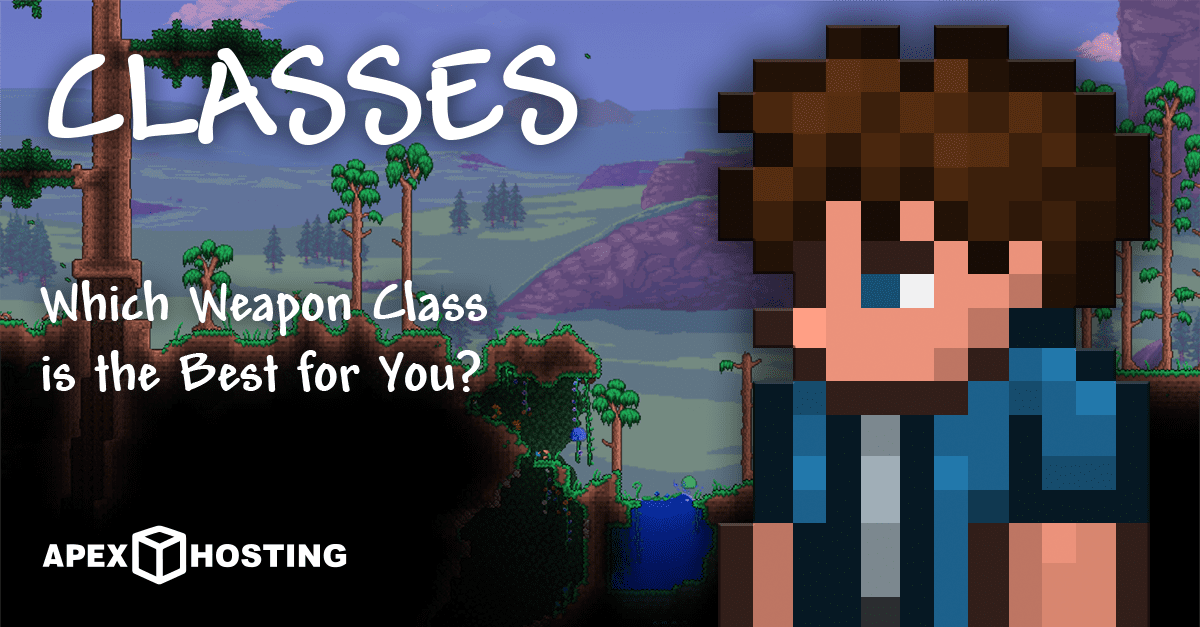 Terraria is one of those games that makes you feel like you’re in an RPG. A role-playing game of your own creation where the world, levels, bosses, and more are the result of your own doing. And in this world, you can choose to be anyone. A powerful warrior who wields the greatest axe, a mage that casts intense spells, or a summoner who relies on his projections to fight for them. In any case, you probably won’t know what to go with until you have a solid guide. Today, we’re going to go over the different ‘classes’ in Terraria, and how they work. Let’s begin. 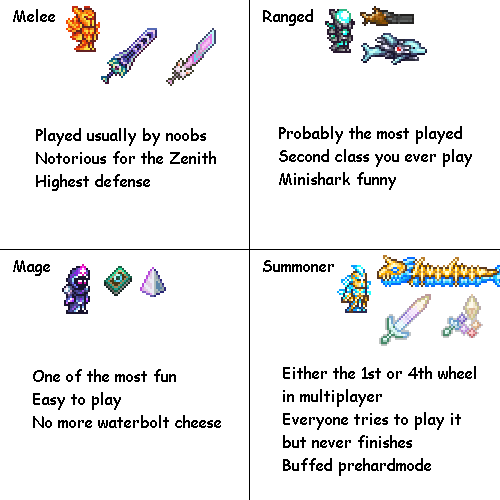 Unsurprisingly, just like Minecraft, Terraria has no formal player class or leveling system. However, weapons can be grouped into four distinct categories based on their damage type. Each class has its strengths and weaknesses and has a wide variety of weapons to choose from.

– Melee: The melee class is powerful, sporting high defense and damage as well as decent crowd control. It utilizes weapons such as swords, spears, and yoyos. Many melee weapons have a short-range attack, and those that are viable at a distance tend to do lower damage than their close-range counterparts. Melee users are good all around, and have no particular weaknesses.

– Ranged: Rangers, or ranged attacks are able to attack from a distance, doing high single-target, piercing or splash damage. They utilize weapons like bows and guns, as well as thrown objects. Rangers constantly acquire ammunition, unless using the Endless Quiver or the Endless Musket Pouch. Rangers are best suited for DPS on a single target, but bad against crowds.

– Magic: Magicians are fragile but highly varied in attack style, often utilizing special mechanics such as homing, lifesteal, and area-of-effect damage. They are held back by reliance on mana, which regenerates very slowly unless the Mana Regeneration buff is in effect. Magic users definitely have the most varied toolkit, but fight off of a resource more limited than ammunition.

– Summoning: Summoners are good at farming enemies, but most summoning armors have low defense, and summons are often inaccurate against enemies that move quickly. Whips are best suited for summoners, increasing their summon damage. While summoning is useful, the game is balanced around the idea the player is using the strongest weapon available to them while summoning.

Each class gains more complex abilities as the game progresses which enables more strategic variety in combat. It is also worth noting that the player should attempt to use as many weapons as possible to determine what best works for them. Preference and fighting style may be more impactful on player performance than hard numbers. Also, consider using buff potions or healing potions to make up for the shortcomings of whatever class you decide on. This is especially important during events and boss fights.

In general, it is recommended to focus on one class. Many armors, accessories, and buffs only benefit specific classes, especially in the late game. This means that you won’t be reaping the benefits of much of your gear unless you are playing a focused role. ‘Hybrid’ sets and gameplay style is viable, especially as a means of making up for the shortcomings of either role, but it usually isn’t as effective as a focused kit.

That’s it! Terraria is one of those games that doesn’t necessarily have hard classes but heavily incentivizes playing into a role by offering benefits and passive bonuses for those who do. With four basic ways of dealing damage, these classes are very cool. I hope that after reading this, you have a better understanding of the classes and maybe now you know which one best suits you. With that being said, have a great day!