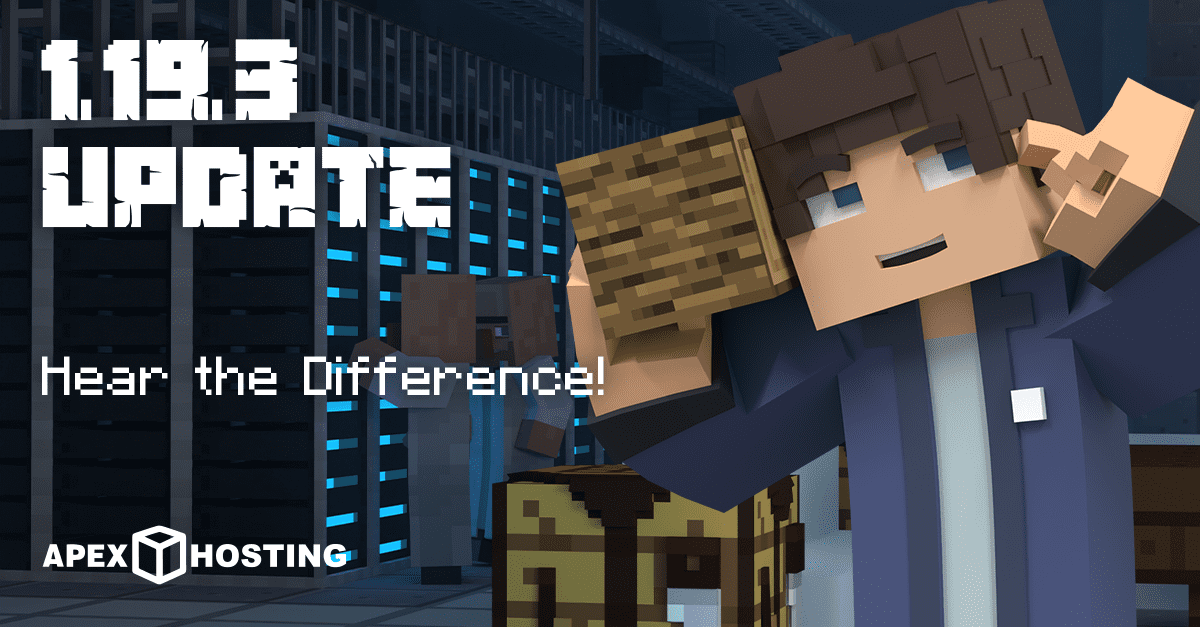 It’s no secret that everybody is waiting in anticipation for 1.20 to have more information dropped on it, but until then, get excited for the last Minecraft update of the year! After a multitude of snapshots including bug fixes, technical changes, and more, Mojang has finally dropped 1.19.3. But what does this update include, and if 1.20 is already in production, was this really necessary? Let’s get into it.

1.19.3 comes with three new features and some experimental features. First, there are now new wood sounds. Various wood types now have unique sounds when placed, broken, or walked on. In total, there are three sets of unique sounds: Overworld wood types, Nether wood types, and Bamboo (when enabled). Step sounds can be heard when walking on Carpets, Lily Pads, and Small Amethyst Buds. Step sounds can also be heard when walking through Nether sprouts, Glow lichen, Crimson Roots, and Warped Roots.

Next, there are a few changes being made for this update. The Creative Inventory has had all of its tabs reworked. For example, there is a new tab called the Operator Items Tab which can be found in the Controls Menu and is off by default. The Vex also has a new look. It’s much cuter now, albeit less detailed than the previous model. In the Nether, Enderman, Skeletons and Wither Skeletons only spawn at light level 7 instead of 11, what it previously was. Stronghold code has also been changed to be more efficient in placement. The Wild Update music has been made to be slightly less loud. These changes along with miscellaneous changes to spawners, chat, and other areas conclude the update.

What exactly is changing with spawners? Well, there is no longer a default mob spawn type when they are placed by the player (previously, this was Pigs). Spawners will also not emit fire particles when a mob spawn type hasn’t been defined. They’re also being renamed to Monster Spawner to match Bedrock, and the text color is no longer purple. Pick-block now works for Spawner blocks. Lastly, the mob type of the spawner is now displayed in the hover description of a Spawner item stack. If the mob type has not been defined yet, the hover description will describe how to set it. Those are all the changes for spawners!

What’s changed with chat? Well, the chat preview has been removed. Chat messages deleted by server moderators will no longer be completely hidden, but rather replaced with text stating “this chat message has been deleted by the server” sort of like Twitch streams. Deleted chat messages will also be displayed in the chat window for around three seconds before being hidden. Partially filtered chat messages now show the filtered text as gray hashes with a hover text saying that it was filtered. The Chat Reporting screen now shows when the player being reported rejoined chat. Overall, chat is being reworked entirely to support more moderation and control.

What’s going on with Tooltips? These little item descriptions are the backbone of those who don’t know how to use literally everything in Minecraft. When tabbing through buttons, tooltips are now displayed above or below them. Tooltips displayed when hovering are displayed next to the cursor. Tooltips from focused buttons (referring to when you press tab) priority over tooltips from hovered buttons. Basically, the visual representation of tooltips is being changed slightly, probably to appease a Mojang member’s OCD. Oh well!

This is going to be a new thing that Mojang starts doing. Essentially, experimental features can be enabled which allows you to test out future content which may not be polished enough to include in the base game. The new experimental features being added include Bundles, Camels, the Bamboo wood set, the Chiseled Bookshelf, Hanging Signs, Mob Heads on Note Blocks Interactions, the Piglin Mob Head, and new advancements.

All of these features and changes along with over TWO HUNDRED bug fixes concludes the update.

That’s 1.19.3! Definitely a major update that blows 1.19.1 and 1.19.2 out of the water, especially due to the experimental features. This update sets a precedent for testing features that will be included in 1.20 in your 1.19.3 worlds, which is great because it allows Mojang to collect more data promptly. I’m particularly fond of the Camels. They’re so cute! In any case, I hope you enjoy this new Minecraft update. Goodbye!