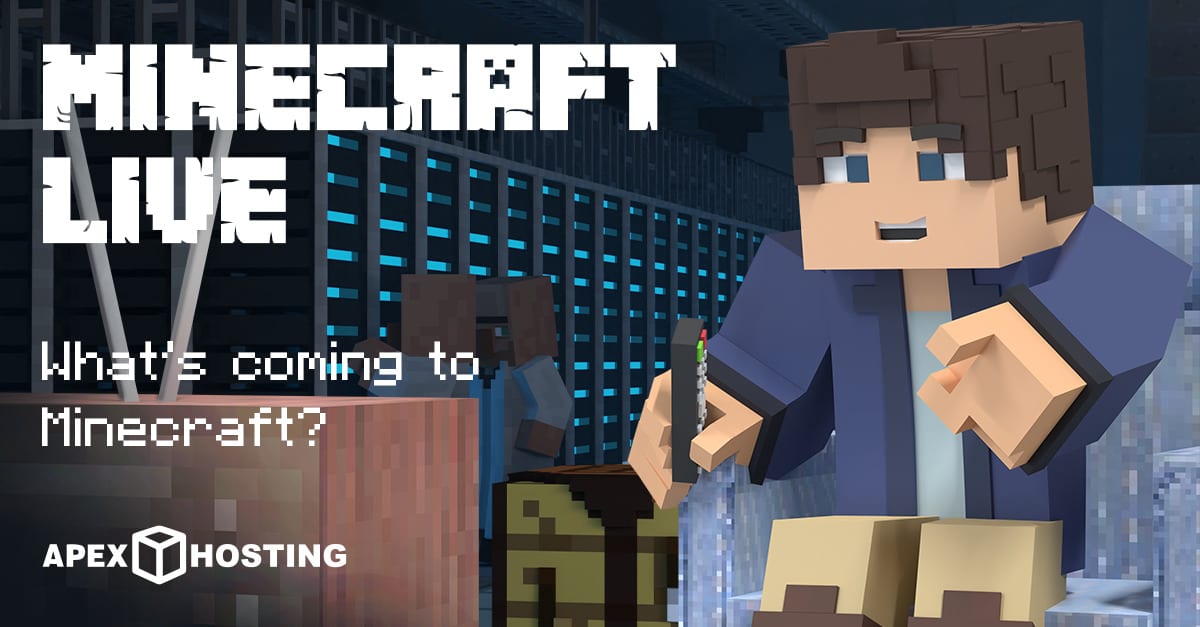 Minecraft Live has concluded! Now that the show is over, Dave is here to give you the digestible version of a show that lasted well over half an hour! Let’s not waste any time, as we have too much to cover! 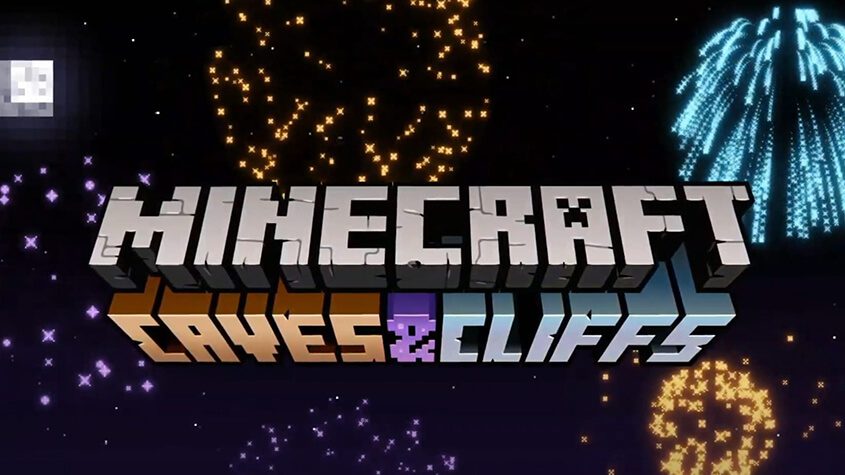 You read that right! The newest update in Minecraft will be the Caves & Cliffs update! No more shall caves be tedious and boring, along with mountains being taller plains. This update plans to rejuvenate the feeling of entering and exploring a new place. It also hopes to make everything look more interesting, which is a huge plus! How about we see what epic features Mojang was willing to show off? 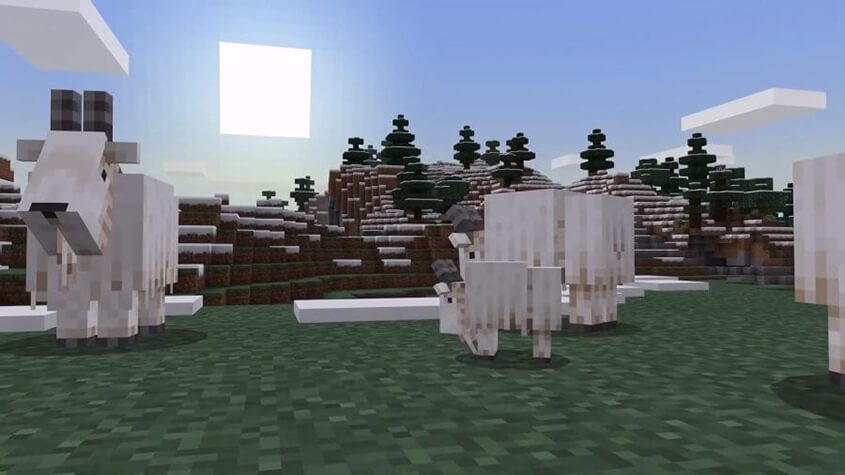 Goats
Mischievous and adorable! They live in the mountains, and if you aren’t careful, they’ll ram you and knock you right off! They also can jump extremely high, which is cool! Looks like they have moon gravity! 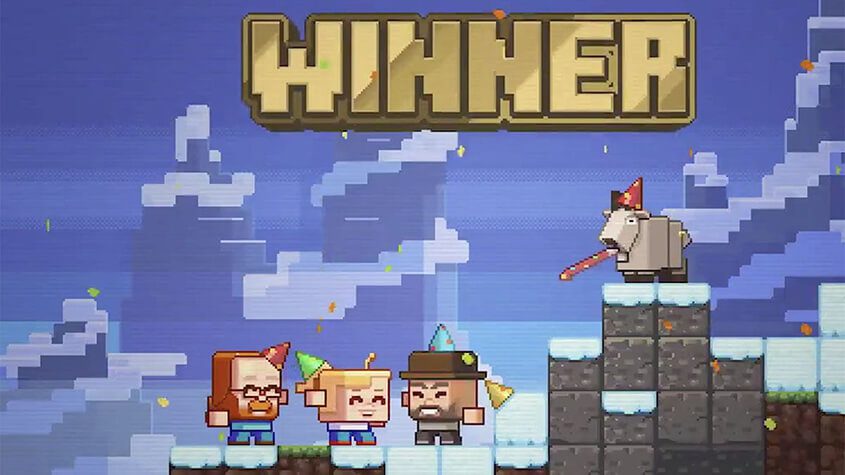 Mountain Generation
Mountains are being revamped to have much better generation, with more grandiose and dramatic mountains. This includes height-dependent generation, whatever that means! I’m not a developer! Treelines and mountain tops will be much steeper, and taller. A new block will be added as well, dubbed ‘Powder Snow’ which is similar to snow, but when walked on, will make you fall right through! 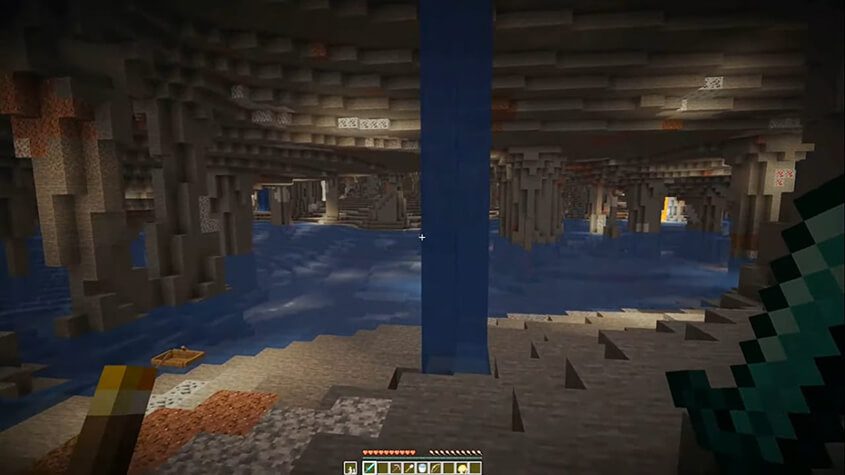 Improved Cave Generation
Caves in general are receiving an overhaul. The generation of the architecture in these caves will be revamped to be larger, more vast, inclusive of intruding nature, and much more. Natural waterfalls, taller ceilings, along with new blocks to boot. Equalizing water levels, overflowed caves, and much more! You might actually need a boat for caves this time, for Aether’s sake! 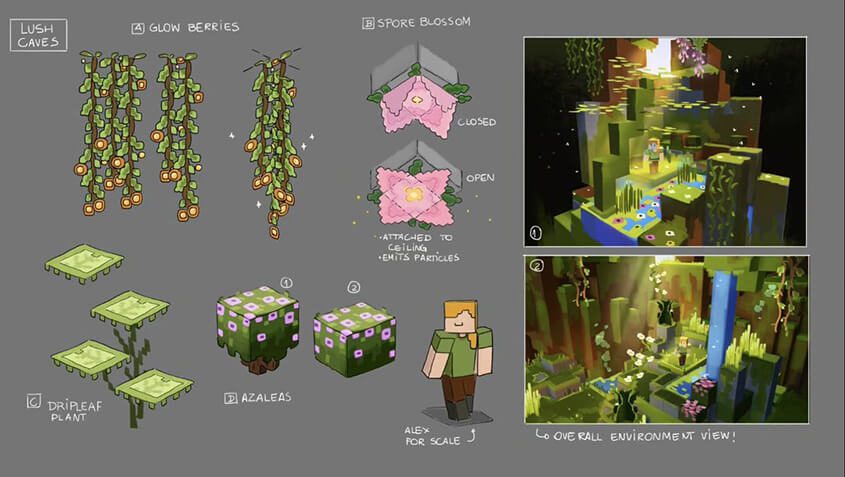 Lush Caves
Mojang lives to impress! These caves are filled with a bount of vegetation, green galore! Particles fill the air, exuding from Spore Blossoms attached to the ceiling which light the environment. Glow Berries can be picked from the vines, and they’re edible too! Dripleaf plants catch the water, but can’t keep it all in! Azaleas sit on trees above ground to signal the player as to where they can find these awesome caves. These caves seem to be smaller than, or at least similar in size to normal caves, so they’re not the ideal base location. 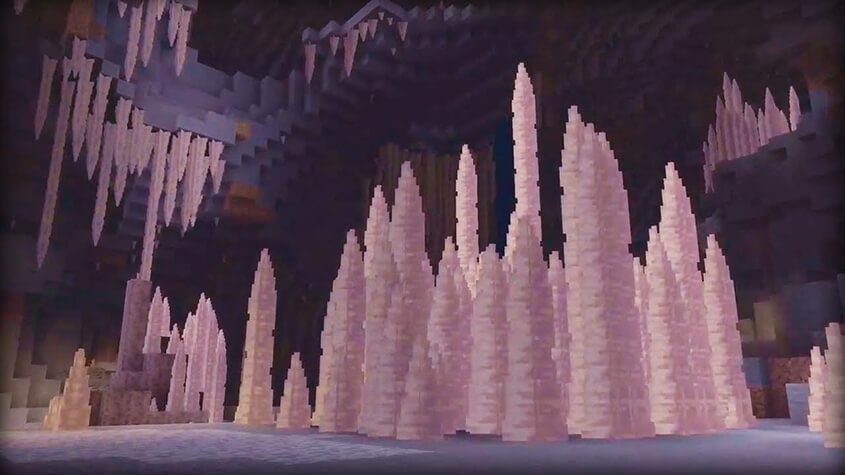 Dripstone Caves
Cave-looking caves! Finally! Dripstone hangs from the ceiling and protrudes from the stone floor. If you look closely, you can see water driplets (get it?) fall from them! Some of the mechanics of Dripstone include gravity and damage. If Dripstone is not attached to a block, it will fall and break. If a player or mob falls onto Dripstone, they will take damage. Dripstone can grow from the ceiling, or the floor and can be different sizes. When the Dripstone is attached to the ceiling, it is called a Stalagtite, and when it is on the floor, it is called a Stalagmite. That’s a little trivia for ya! 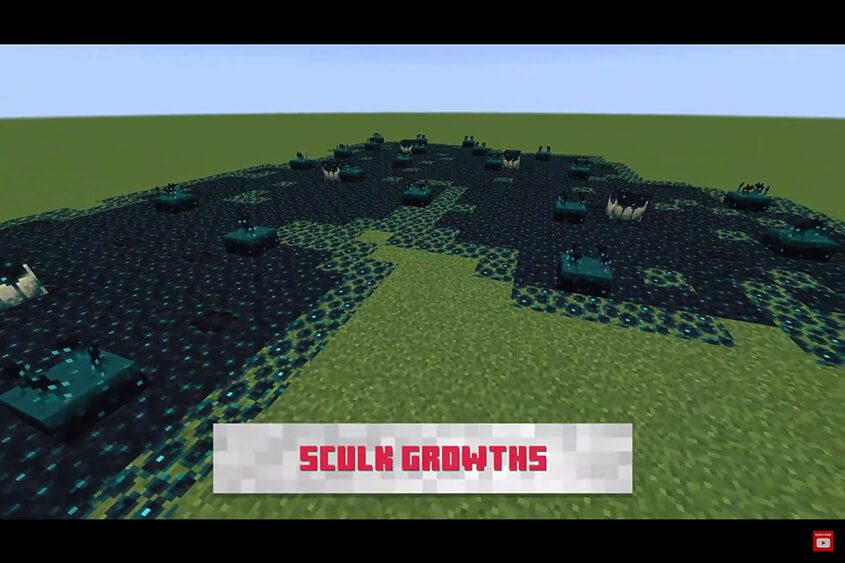 Sculk Stuff
Ok, so what is Sculk? It sounds gross. Basically, some new blocks are included, the Sculk Growth and the Sculk Sensor. The first block is merely a dark cube, while the Sculk Sensor is much more interesting. When a block is broken or placed next to it, or any action is done near it for that matter, it will detect the vibration and send out a redstone signal. A Sculk Sensor’s signal also counts as a vibration. Wool can be used to block out signals based on the side the wool is placed. That’s quite the lengthy explanation, so you’re sure to get a more in depth guide on these eventually! 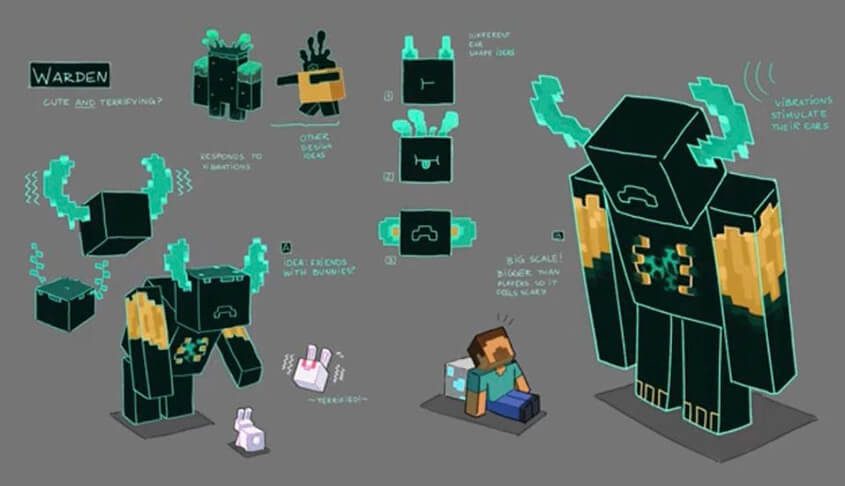 The Warden
This mob is meant to recapture the feeling of the first night in Minecraft. That fear. That dread of a zombie breaking down your door on when the sun set. The Warden is an incredibly strong, BLIND mob found in only the deepest of caves. This guy has Sculk Sensors on his head rather than eyes, and he’ll only be able to detect you from movement. The problem is, you’ll need to place torches, mine blocks, and do all the Minecrafty things we do to play the game. On top of all of this, the Warden does a TON of damage, and he’ll give you a run for your money! 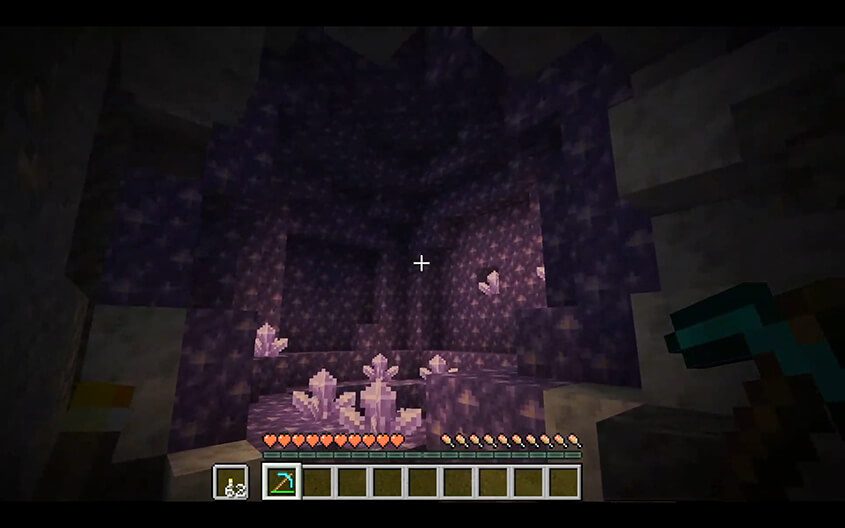 Amethyst Geodes
Gorgeous rooms encased in purple crystals. Stepping inside the geodes onto the crystals will trigger soothing noises. I can only describe it as tingling! Now, as for mechanics, the Crystals can be obtained from these, but the Amethyst geode blocks that form the encasement cannot be mined. Similar to how spawners work, the idea is that you’ll have to find ways to efficiently travel to the Geode each time you would like to go there. Mojang expressed how they want players to expand their world, rather than bring everything back home. The crystals can be used to create a Telescope, which does what you’d expect. A little underwhelming, but I ain’t complaining. 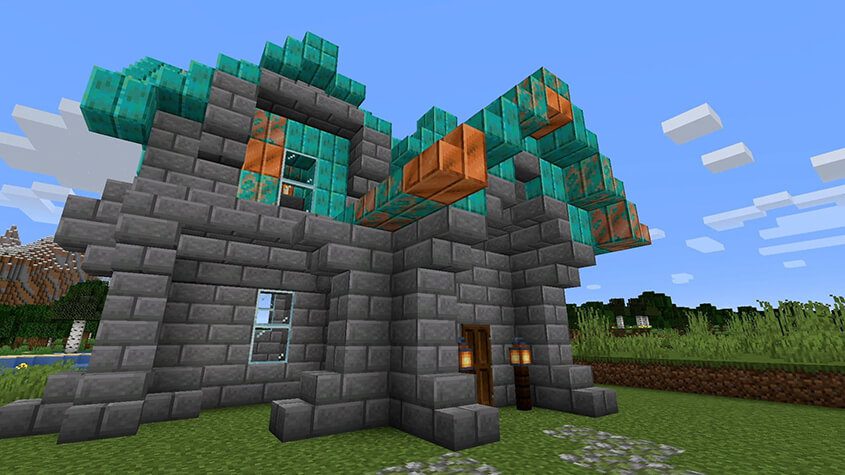 Copper
Modpack players, rejoice! No longer shall we argue over the seven different versions of copper! We shall all unite under vanilla Copper! Copper, unlike other ores, will introduce veins. Ore veins are now going to be a mechanic which will introduce new mining strategies to the game. Just like real life, copper will age. Making blocks from copper will inevitably lead the blocks to turn a metallic green, as a result of the oxidation. Basically, realism! With copper, comes the addition of the lightning rod! Now, you won’t have to worry about your wooden base being struck by lightning. Rather, control nature with the power of ingenuity! 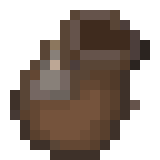 Bundles
An elegant solution to the ever growing inventories we face. You can throw those ten Shulker Boxes out the window, because we now have a cheap and efficient way to store multiple items in one slot! Many kinds of items can go in one Bundle. It is unclear as to the exact mechanics of them, but I assume they hold a stack of 64, like most blocks. But, it can hold multiple kinds of items at the same time.

Archeology System
This was the biggest curveball in the entire stream, in my opinion. Basically, in your world, you will find tons of excavation sites all throughout your world. By crafting a brush, you can discover the secrets behind these ancient structures. You will be rewarded with shiny goodies, as long as you’re careful! You’ll need to be gentle, as you can destroy the artifacts by being too hasty. Besides normal ores, you can find ceramic shards with weird art on them (pixel art pending) and combine them to make your own clay pots! 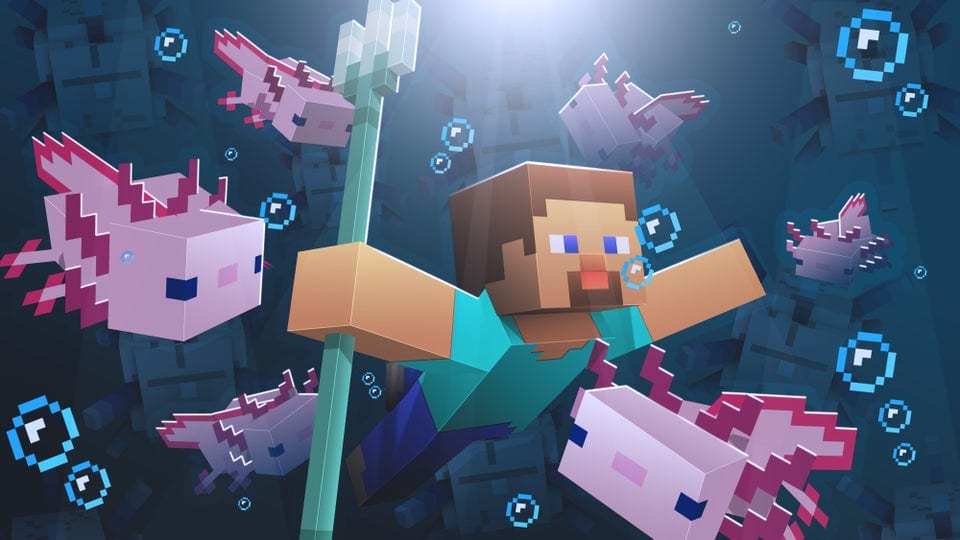 The cutest predator you will ever meet!
Give a big round of applause for everyone’s new favorite mob…the Axolotl! Get excited, because these adorable amphibians can be snagged in a bucket of water and have a ton of utility! The definition of ugly cute, an endangered species being added to Minecraft creates awareness on the topic, just like Bees. Scooping up these Axolotls in a bucket will allow you to bring them with you on your adventures, but remember: they’re a predator! Axolotls that you’ve captured will help you fight in the water! They’ll attacked Drowned, Guardians, and fish! When Axolotls are damaged, they play dead, causing the mob that was attacking them to ignore them. We don’t have much more information, but we’re sure to get additional information in the future.

Now, for the longer, less concise version. Everyone was able to tune in to Minecraft Live (which replaced Minecon this year) to vote for the mob they wished to be added in the newest update. There were three choices: Moobloom, Glow Squid, and Iceologer. The vote was held on Twitter during the show.

Now that you know what the situation was like, Dave will give you his totally-not-subjective opinion on the choices!

A glistening cow variant covered in flowers. Bees are attracted to this beautiful mob, and shearing it causes it to drop flowers. This mob would most likely be found in plains, forests, and other flowery biomes. You should totally vote for this mob, as it is the best! I am not biased! This mob originated from Minecraft Earth.

In cahoots with the Illagers, this Illager variant will drop huge chunks of ice onto you. Be weary, as you’ll find this mob in cold environments, and extremely hostile to boot! This mob is actually from Minecraft Dungeons, and functions just as he does in the original game.

A glow-in-the-dark variant of your favorite ocean mob. This dude has the same shape and size as a normal squid, but he glows a light blue! Lighting up the oceans, and bringing his neon self around, this is the most curious of the three choices by a longshot. We’re not too sure on the mechanics of what this mob would do, but it is implied that it has some type of hypnotic effect on players. We’ll just have to see! Like the Moobloom, this mob also originates from Minecraft Earth.

Oh my Notch! That was a really long stream! Turning all of that information into this digestible read was a little strenuous, but I got the job done! I hope you all are as excited for the Caves and Cliffs update as I am. I could tell from just looking at the devs’ faces that they really care, and they put their heart and soul into this update. Thank you so much to Mojang for still supporting the best game in the world, the game that has brought us all together. Thank you so much, for listening to the community and giving us what we want, no questions asked. This couldn’t get much better, and with that said, have a great day!