Ever since Minecraft’s Caves and Cliffs update released, the new craze has been all about everyone’s favorite new mob, the Axolotl! This cute yet dangerous predator is now officially released, and today, we’re going to go over everything there is to go over when it comes to this mob. Breeding, utility, behaviors, random trivia, and even how to grow your own personal army. (note: I am not responsible for any harm you bring unto others) Now, let’s begin!

Axolotls are aquatic passive mobs that attack most other underwater mobs. They can be found in water sources underground at light level 0, and come in five different variations of color: pink, brown, gold, cyan and blue.

Axolotls are passive toward players and can be attached to leads. They give Regeneration I per Axolotl in the fight, up to a duration of 2 minutes, and remove Mining Fatigue when a player kills a mob that is in combat with an Axolotl. This makes them incredibly useful when raiding Ocean Monuments.

Axolotls attack all aquatic mobs except turtles and dolphins. They also attack drowned. An Axolotl deals 2 points of damage per attack. After killing a non-hostile mob, there is a two minute cooldown before another non-hostile mob can be hunted. Axolotls prioritize attacking hostile mobs over non-hostile mobs.

If an Axolotl takes damage underwater, it may play dead, dropping to the ground for 10 seconds while gaining Regeneration I. Hostile aquatic mobs ignore healing Axolotls (they think they’re dead!) There is a ⅓ chance for an Axolotl to play dead to recover 4 health points. In addition, if either a random integer from 0-2 is less than the amount of incoming damage, or the Axolotl’s health before the damage is dealt is less than 50% of its maximum health, it plays dead.

On land, Axolotls move toward the nearest water source because they die outside of water after 5 minutes. Unlike fish, dolphins, and squid, Axolotls do not die on land in rain or a thunderstorm.

Unlike most mobs, Axolotls cannot be moved by flowing water. However, they are still affected by Bubble Columns made with Soul Sand or Magma Blocks.

Adult Axolotls can be led and bred with buckets of tropical fish. After breeding, a baby Axolotl spawns and 1-7 experience is generated. The parents cannot be bred again for 5 minutes. 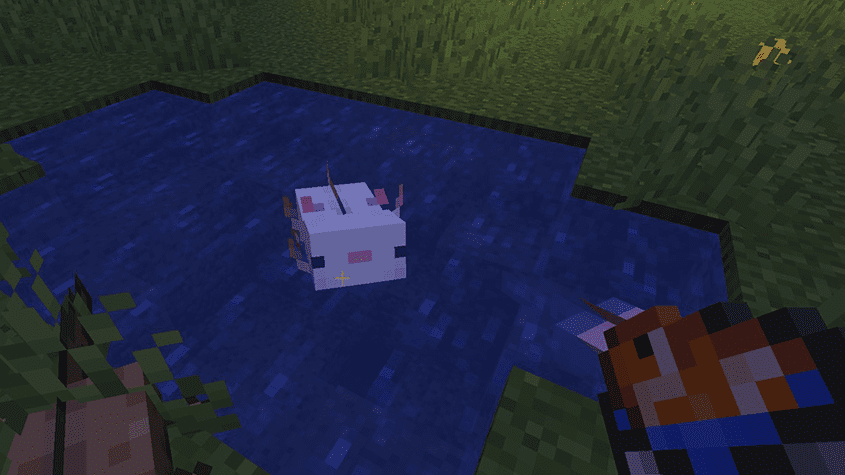 The baby Axolotl has a 1/1200 chance to be the rare blue variant; otherwise, it inherits the color of one parent at random. Babies follow adults, and grow to adulthood in 20 minutes. The growth of baby Axolotls can be accelerated using buckets of tropical fish; each use reduces the remaining growth time by 10%.

Welp, that’s everything! Axolotls, despite their small stature, have a surprisingly large presence when it comes to their features, functionality, and effect on the game. Don’t be fooled by their cute appearance, these beasts are stone cold predators! I hope this blog helped you learn something new about this great amphibian, and with that said, have a great day!