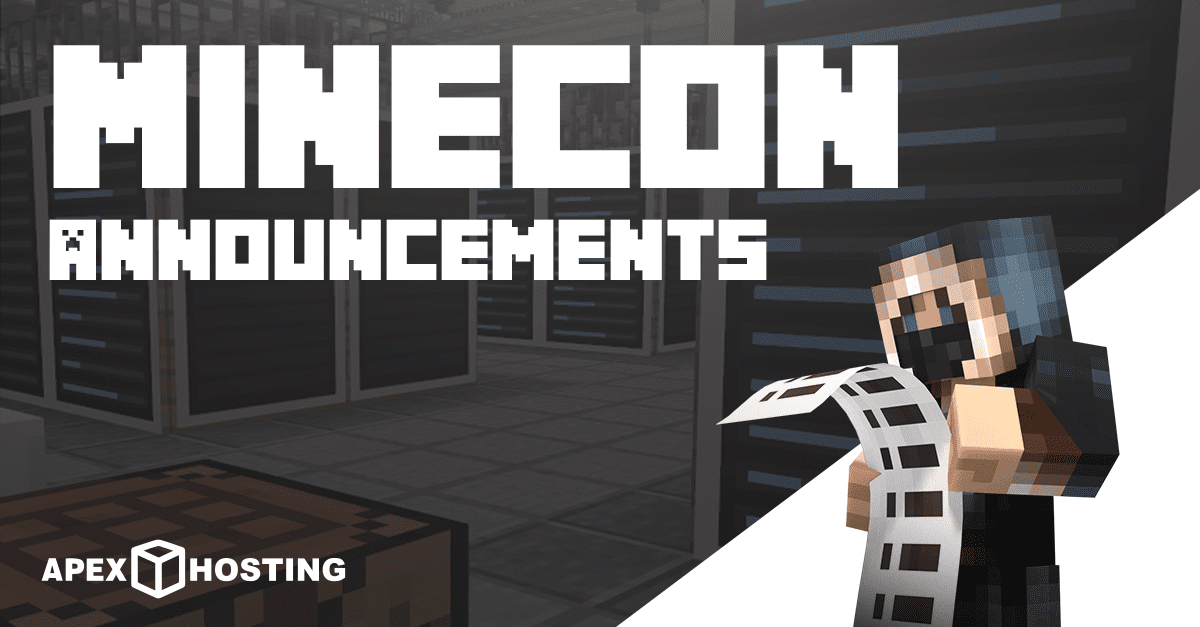 Minecon Live has just finished wrapping up and all we have to say is “WOW”! Okay, that’s not really all we have to say but it was an amazing show with tons of amazing things that are coming out for the game as well as new games and more! If you missed the show don’t worry we got your back! We are going to cover and break down everything that was announced at the show! Let’s dive right in.

The winning biome with the most votes is…Mountains!

It was a very tight race between Mountains and Swamp in the end (Sorry Badlands) but Mountains came out on top in the polls! Don’t worry though as all the biomes will eventually be updated with their new features if Mountains weren’t your favorite!

Yes, you read that correctly! We are getting brand new biomes added to the nether! With all-new blocks, mobs, food and more! The first biome showcased is called the Soulsand Valley which features fossils, blue fog, blue flames and many more secrets unknown. Up next are the Netherwart Forests Red and Blue which have new trees, Nether Fungi, food and more. A perfect new place to have a home if you like to live a little more dangerously. Speaking of food and danger there is a new mob called the Piglin Beast (name pending). This new mob is quite hostile but can be bred and is a new food source available to you in the Nether. The name of the mob is not final and Mojang wants you to vote on what the name of the mob should be! So go over here and cast you vote. Speaking of new names Zombie Pigmen have been renamed to Zombified Piglins with the introduction of another new mob the Piglins! The piglins live in the Nether hunting Piglin beasts and live in small fortifications called bastions throughout the Nether. Though they are hostile they love gold and wearing gold armor will cause the piglins to be friendly and even let you trade. However, if you loot their chests than be prepared to fight for that loot!

Recently bees were added in the new Java snapshot but what are bees without honey? How about a whole block of honey? Honey blocks are being added to the game! It’s sticky so you can slowly climb up and down it but beware parkour players as jumping on these will greatly decrease your jump height putting you into a sticky situation. Another new block being added is for Redstone enthusiasts is the target block! You can shoot the target block with an arrow to emit a Redstone signal which can open up for tons of amazing new contraptions, mini-games and more!

There will be tons of new amazing tools at creator’s disposal to make new amazing things in-game! Replace animations, particles, custom render effects and so much more with these new scripting tools!

Capes and Character Creation For Bedrock!

Bedrock players now have access to their very first cape! Be sure to grab it from the marketplace as it’s only available for a limited time! Coming soon is the character creator which will allow bedrock players to customize and make their own unique character skin in-game with tons of awesome cosmetics and more than 100 features you can change!

Starting in October Mojang’s Augmented Reality mobile game will be available in Early Access and will be rolled out to the entire world by the end of the year! So be sure to sign up on the Minecraft Earth website!

This game isn’t digital but physical!

Mojang is launching its first-ever board game developed by Ravensburger! It’s called Minecraft: Builders & Biomes with will let you explore the overworld, mine rare resources, build amazing structures, collect loot and fight mobs! The person with the most experience points wins! The game will be available sometime before the end of 2019!

Minecraft:Dungeons new opening cinematic was revealed for when you start the game for the first time and is getting ever closer to its release! A release date hasn’t been given yet but will sometime in Spring 2020 and we just can’t wait!

The best for last!

Next year will be the first year with no Minecon. But something even better! The first-ever Minecraft Festival will be taking place in Orlando, Florida on September 25th-27th 2020! This 3-day celebration of all things Minecraft will bring interactive exhibits, inclusive gameplay, tournaments, live entertainment, panels, content creators, developers and so much more! Don’t worry if you aren’t able to attend as the entire thing will be streamed live directly from the festival for all to enjoy! Tickets aren’t on sale yet but they will be going quickly! So be sure to check out the website and keep up to date for when tickets will be available!

There was even more that unfolded during the live show and highly recommend going back to watch it for some of the funny hi-jinx, screenshots, trailers and more! You can check out the full break down and watch the full live show over at Mojang’s site here. Minecraft is better than ever and we can’t wait for Minecraft Festival and maybe we’ll see some of you there 😉